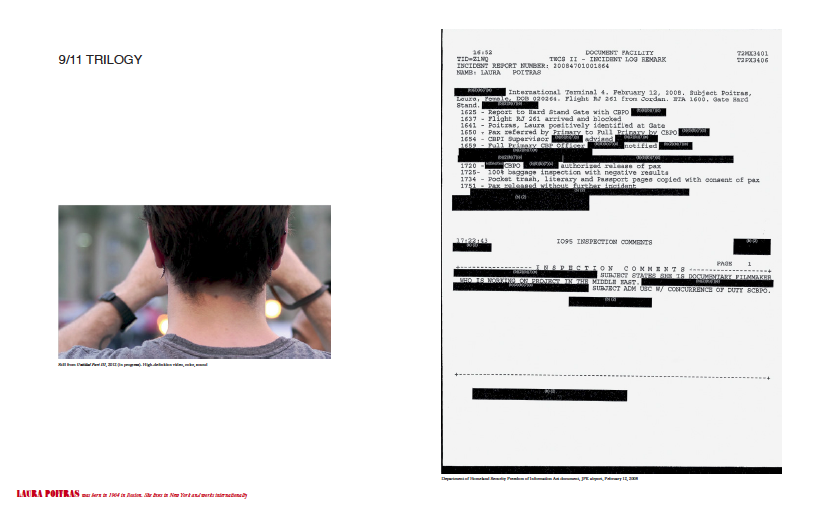 Documentary filmmaker Laura Poitras is among the 2012 MacArthur Foundation "Genius Grant" award winners, announced yesterday. Her 9/11 Trilogy was included in the 2012 Whitney Biennial film program. My Country, My Country (2006), followed a Sunni Arab doctor running for office in Baghdad. The second film, The Oath (2010) is set in Yemen and Guantanamo. Select footage from her upcoming film on domestic surveillance, which profiles William Binney "a 32-year veteran of the National Security Agency who helped design a top-secret program he says is broadly collecting Americans’ personal data" is available to watch on the New York Times' site.

Worth watching her appearance on Democracy Now, discussing how "how she has been repeatedly detained and questioned by federal agents whenever she enters the United States."


As Glenn Greenwald wrote earlier this year:
Poitras is now forced to take extreme steps — ones that hamper her ability to do her work — to ensure that she can engage in her journalism and produce her films without the U.S. Government intruding into everything she is doing. She now avoids traveling with any electronic devices. She uses alternative methods to deliver the most sensitive parts of her work — raw film and interview notes — to secure locations. She spends substantial time and resources protecting her computers with encryption and password defenses. Especially when she is in the U.S., she avoids talking on the phone about her work, particularly to sources. And she simply will not edit her films at her home out of fear — obviously well-grounded — that government agents will attempt to search and seize the raw footage.

That’s the climate of fear created by the U.S. Government for an incredibly accomplished journalist and filmmaker who has never been accused, let alone convicted, of any wrongdoing whatsoever. Indeed, documents obtained from a FOIA request show that DHS has repeatedly concluded that nothing incriminating was found from its border searches and interrogations of Poitras.