Frieze New York: The Art Outside the Tent
By Rachel Wetzler 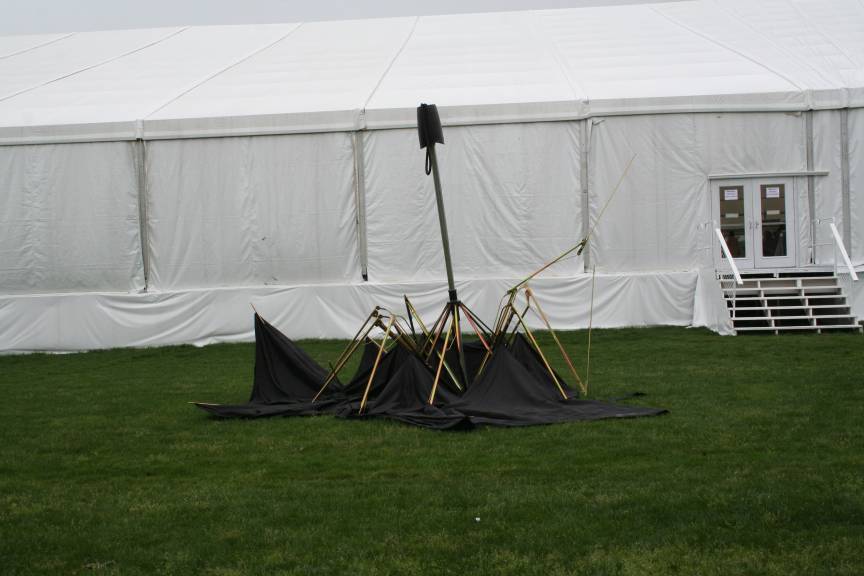 As far as art fairs go, Frieze New York was better than most: the booths were spacious, the tent well lit, and the amenities for visitors excellent. The quality of the work on view, too, was a vast improvement over the first round of fairs this past March; many of the participating galleries brought impressive pieces by both emerging and established artists.

Supplementing the art lining gallery booths inside were a host of works presented outdoors, organized by appointed curators: Frieze Projects, a series of site-specific commissions curated by Cecelia Alemani, and the Sculpture Park curated by Bard CCS director Tom Eccles—technically separate, though physically intermingling with the Frieze Projects commissions.

The Sculpture Park was largely composed of the sorts of dull, oversized abstraction typical of corporate plazas and civic commissions—inoffensive, vaguely industrial, often colourful (Katja Strunz, Gabriel Kuri) or shiny (Tomas Saraceno, Jeppe Hein.) In short: perfectly positioned to move swiftly from the fairgrounds at Randall’s Island to the backyard of some collector’s summer home. Indeed, each work was labelled not only with the artist’s name, title, and date, but also the gallery representing it—all of them participants in the fair—making it essentially an extension of select gallery booths.

Others read merely as oversized gimmicks. For Subodh Gupta’s Et Tu Duchamp? (2009–2010), the artist translated Duchamp’s famous moustachioed reproduction of the Mona Lisa, L.H.O.O.Q., into three dimensions, casting it as a large-scale bronze. The title of Gupta’s work suggests that his intent was to replicate Duchamp’s gesture of comically appropriating a canonical work—in the twenty-first century, Duchamp is as recognizable as Da Vinci—but Et Tu Duchamp? is less a subversive violation of a masterpiece than a self-aggrandizing, one-note gag. Likewise, Joshua Callaghan’s Two Dollar Umbrella (2011) presents the titular object amplified to monumental proportions; with its loose spokes pointing skyward like Laocoön’s outstretched arm, Callaghan’s pathetic umbrella has its own odd pathos—given the overcast skies during much of the fair’s run, discarded umbrellas littering the city’s street were a common sight—but elevating an everyday inconvenience to the status of mythic tragedy is neither new nor compelling. 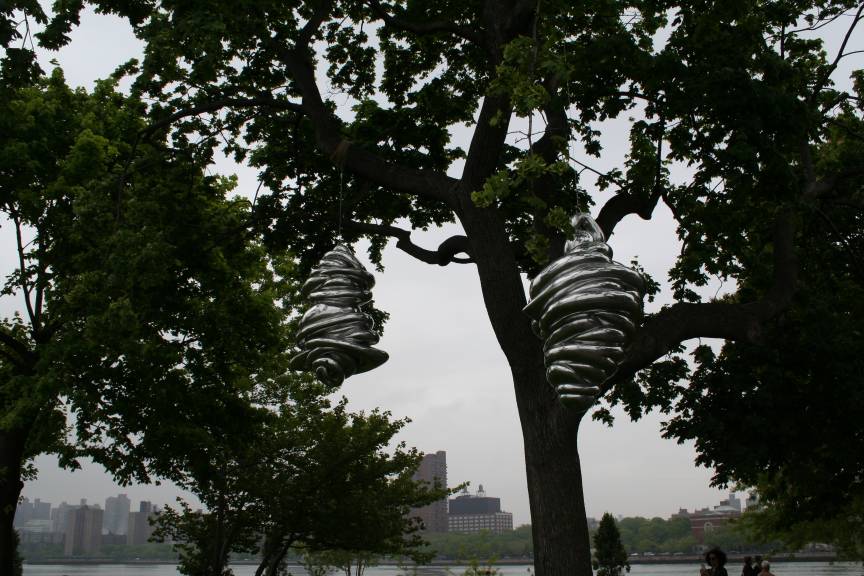 Works that engaged the setting more directly fared somewhat better: Louis Bourgeois’s untitled metallic cocoons (2004) dangled from trees, catching the light perfectly. Likewise, Susan Philipsz’s sound installation We All Go Together (2009) takes the form of an unexpected dialogue between speakers in adjacent trees playing a multi-part recording of an Appalachian folk song. Obscured by the branches and leaves, it was difficult to tell, at first, where the voices were coming from, provoking a momentary, but welcome, sense of disorientation. Philipsz is well-known for sound-based projects that utilize public space, making her an ideal choice for this kind of site; her Turner Prize-winning work Lowlands (2009), for instance, was installed under three Glasgow bridges, playing recordings of different versions of the sixteenth-century Scottish lament “Lowlands Away.” Philipsz’s work is specifically about asking those who encounter it to consider their environments, activating mundane spaces through the introduction of unfamiliar, perhaps even incongruous, elements—but in a far subtler way than the visual cacophony of the large-scale sculptural projects. We’ll All Go Together slowed the dizzying pace of the art fair setting, rewarding those who stopped to listen.

Frieze Projects commissions are presented under the auspices of the fair’s nonprofit wing, but such a distinction comes across as a mere technicality, particularly since many of the artists selected are represented by participating galleries, whose booths announce the commissioned projects. Incorporating works by artists such as John Ahearn and Tim Rollins & K.O.S. — associated with socially-engaged, community-driven art practices— seems like an attempt on the part of organizers to defend the fair against accusations of elitism, as if seeing the names of such artists on the roster of Frieze Projects participants will counteract the branded BMWs chauffeuring VIPs, the Soho House outpost, and the ethically dubious practice of undercutting union contractors. This distinction between the nonprofit Frieze Projects and the plainly for-profit operations of the fair seemed particularly slippery given that Ahearn’s project—a recreation of his 1979 exhibition “South Bronx Hall of Fame” at the now-closed alternative art space Fashion Moda, for which he created sculptural “casts” of the faces of neighborhood residents for free, displaying them in the gallery’s storefront window as a means of both engaging and representing a segment of the public largely excluded from the art world—invited Frieze collectors to commission their own portraits for the not-insignificant fee of $3000 each.

At the very least, several other projects commissioned for the fair acknowledged its resemblance to a kind of amusement park, most notably Los Angeles-based artist Joel Kyack’s Most Games Are Lost, Not Won (2012), a somewhat perverse take on carnival kitsch, modelled after county fair games. Yet taken as a whole, Frieze’s public projects do not transform the fair into an idyllic “fantasy world,” as Alemani states, but rather a reminder of how out of touch it is with the social and cultural realities of the city, whose “existing local communities” and “unique landscape—both social and geographic” the fair purports to engage.

This is perhaps best exemplified by Christoph Büchel’s contribution to the Sculpture Park, several examples of his new series 1% which were placed, unmarked, around the fair’s grounds. Comprising six shopping carts, each filled with all of the belongings of a homeless New Yorker, purchased by Büchel for $300 to $500 apiece, the carts are being sold by Büchel’s gallery Hauser & Wirth, with prices ranging from $30,000 to $50,000; the “1%” in question refers to the fact that the amount Büchel paid for each cart represents 1% of its new value, once inscribed as a work of art. Though there is, I suppose, an argument to be made for the project as a critique of art-market capitalism, in which the authorial touch of the artist can transform objects that are otherwise considered not only worthless, but also downright squalid by most, into things of monetary and cultural value; it might function better if the artist himself—and his gallery—didn’t profit so heavily from it. Whatever Büchel’s aims for the project might have been, it struck me as exploitative.

There is an alarming tendency among art fairs to conflate projects that are open to the public with democratic approaches, talks and panel discussions with critical discourse, and the display of art with exhibitions. But placing projects outside does not an accessible platform make. At best, these are only gestures toward inclusivity; at worse, insidious attempts at marketing commercially available artwork by participating galleries under the guise of curated programming.