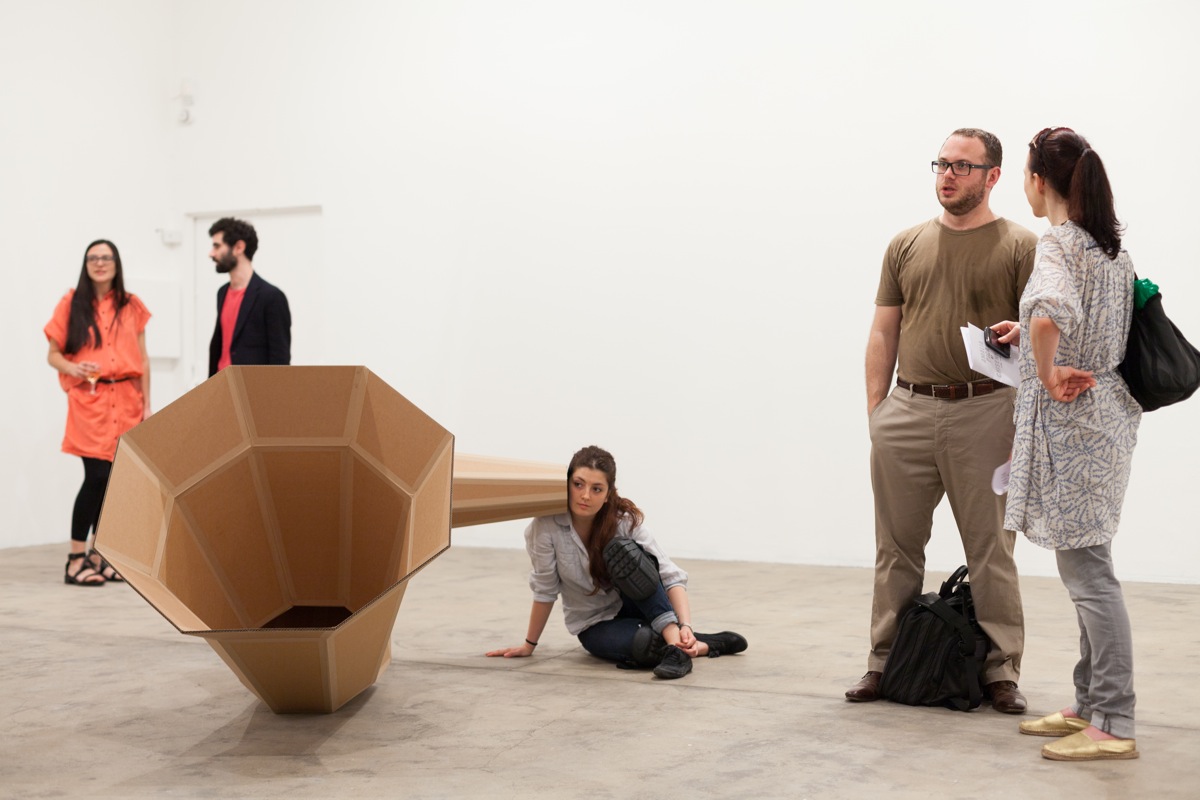 There is a particular romance in miscommunication, wrought by difference and distance. The undelivered letter, the intercepted telegram, the voicemail message never played back are the chance minutiae which drive the action of the plot forward, or cause it to veer dramatically off-course. Mislaid memoranda and transposed missives are Greek Fates for the modern era, where rupture is a stronger organizing force than the continuity of a single thread. Still, it is strange to contemplate crossed-wires in a contemporary context, where a missed cue – the probable end-result of too many functional, thus distractible, multiple-channel communication devices – still engenders the ultimate social faux pas: You didn’t get the message?

Managers and technocrats determined to allay postmodern anxiety seek to reduce error in manifestations of human passion, from theaters of war to those of love, both on- and off-line. To a certain extent clinical psychology, too, helps condition us to distinguish signal from noise. Alain Badiou’s In Praise of Love laments the disappearance of social discomfiture via the easy connectivity peddled by Internet dating sites:

After all, it’s not so very different to an arranged marriage. Not done in the name of family order and hierarchy by despotic parents, but in the name of safety for the individuals involved, through advance agreements that avoid randomness, chance encounters and in the end any existential poetry, due to the categorical absence of risks.

Where are exhilaration and ecstasy without some amount of personal risk? This conundrum resonates throughout London-based artist Amalia Pica’s sculpture, installation, and performance works, which consider moments of potential for point-to-point communication – and by extension, human connection; togetherness. Using not especially technological materials, the invariable “failure” of Pica’s work to draw disparate subjectivities into dialogue is most always a result of the aesthetic formalism of mediation, a quality borne out in the quiet beauty of her installations. Exhibited in the New Museum’s second triennial this year, Pica’s pleasing post-Minimal projection Venn Diagram (Under the Spotlight) (2011) expanded upon an earlier preoccupation with the diagrams from the ink-on-paper series Untitled (2006). The mathematical illustrations were banned in 1970s Argentina, where Pica grew up, for the perceived danger in clear expressions of collectivity.

Her interest in the visualization of interaction and exchange might seem to have pragmatic applications today, although significantly it is the symbolism of “the social” (in the above case a field of color rather than a cloud or network,) which is philosophically operative beyond the direct representation of raw data. In this sense, her body of work forms a critique of the individual’s pure egoism as much as particular barriers to communication (chance, timing, autocracy) – playing with language, symbol and signal to “talk about talking.” Barring an algorithm to calculate the compatibility of notional personality tics, favorite 90s slasher flicks or other equally ambiguous criteria, Pica’s most reliable device describing the relationship between two is a single line: forming a bond or being deflected.

Pica’s current solo exhibition at Chisenhale Gallery coincides with the culmination of a yearlong project undertaken in the East London borough local to the art space. For I am Tower of Hamlets, as I am in Tower of Hamlets, just like a lot of other people are (2011/12), the artist loaned out a pink granite Echeveria plant, modeled after a variety of the Mexican succulent growing in Kew Gardens, to neighborhood families for a one-week period each. Generally cutting the figure of a too-large artichoke, Pica’s roaming sculpture packs into a hard rolling case that might otherwise accommodate an alto saxophone. By redefining the notion of public sculpture as something shareable rather than fixed or ideologically domineering, Pica provided a rare opportunity for participants to experience an artwork in the intimacy of the home; notwithstanding any out-of-the-ordinary activity required to facilitate its borrow and return. Through handling Pica’s sculpture, the tangible and intangible traces of a community might be sensed from its condition, as one notes dog-eared pages and expiration dates stamped into the public library book. 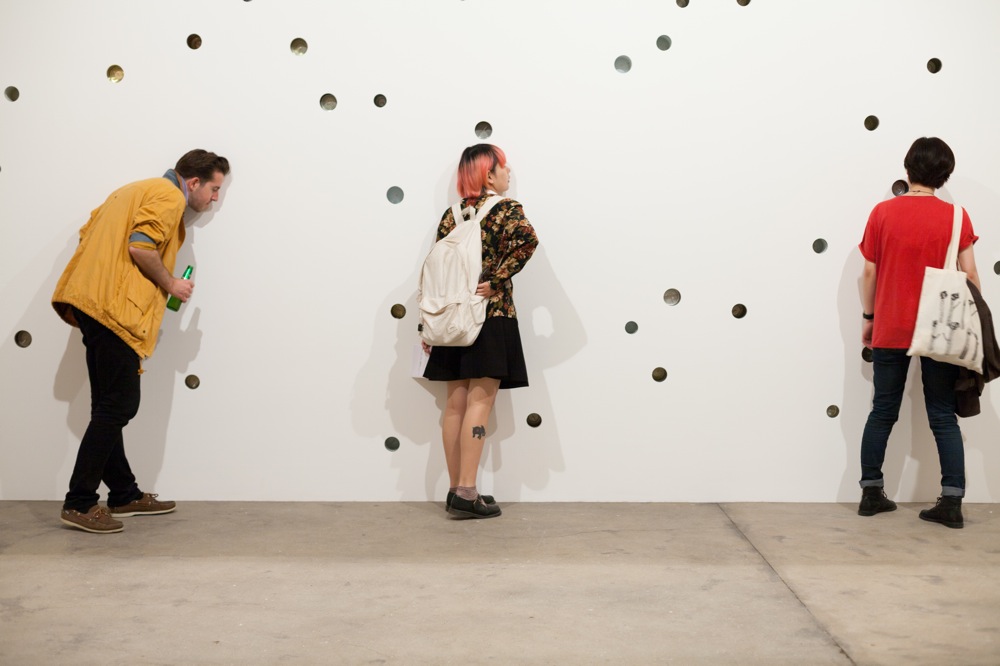 If Pica’s artwork gestures towards an ideal form of communication, structures and motifs including signal flags, strings of electric lights and colorful bunting reemerge in various constellations, flickering at varying stages of remove. Such is the case for her well-known Untitled (fiesta lights) (2006), a festoon of bulbs which draws the viewer into the gallery from the street and spans the foyer colorfully until it is anaesthetized (filter-less) upon entering the white cube; the single zagging strand droops gracefully until dropping repeated loose loops onto a hook against the far wall. The center of the gymnasium-like space is dominated by Switchboard (2012), a lengthy double partition pock-marked along its surface as neatly as a wedge of Emmenthaler. The work’s narrow cross-section reveals these standardized “holes” to be a dense network of outward-facing tin-can telephones; emptied of coconut milk, sweet corn, baked beans and stretched tightly together with string in configurations too complex to aurally trace. While not especially functional, Switchboard plays into childhood notions of telecommunications: the direct line traveling window to window, held taught enough across the block to carry urgent vibrations of the voice. Switchboard here contains echoes of If These Walls Could Talk (2010): tin cans and string stretched between the perimeter walls (with no access for an interested listener), as well as Eavesdropping (2011): found drinking glasses stuck to the wall with glue which invite opportunity to overhear activity on the unseen side opposite. In each case the viewer’s sensitivity to sonic space is heightened, although only in Switchboard is there a chance for “social listening” – to the sighs and movements of another body – within the confines of the exhibition itself.

The scale of the hearing device explodes for Acoustic Radar in Cardboard (2012), a crude gramophone-like form with a bell wide enough to catch conversations floating nearby. At the exhibition’s private viewing, one becomes paranoid that the occasional performer’s riveted listening technique might also be an act of critical surveillance, until a personal trial of the receiver assures that the instrument’s recycled material absorbs mostly atmospheric buzz. The sound piece Overhearing Fiesta by Raffaelle Carrà (2012), a lively recording of an Italian singer in Spanish intended for commercial distribution in Latin America, is activated by motion sensors in the mostly vacant far corner of the gallery – a casual expression of jubilation periodically emanating from behind the wall. While this particular seepage seems compatible with city environs, where calm is ever a luxury, the dying refrain soon attunes the listener also to the muffled external sounds of rubber tires rolling across rain-soaked pavement and the clamor of children in the schoolyard next door. 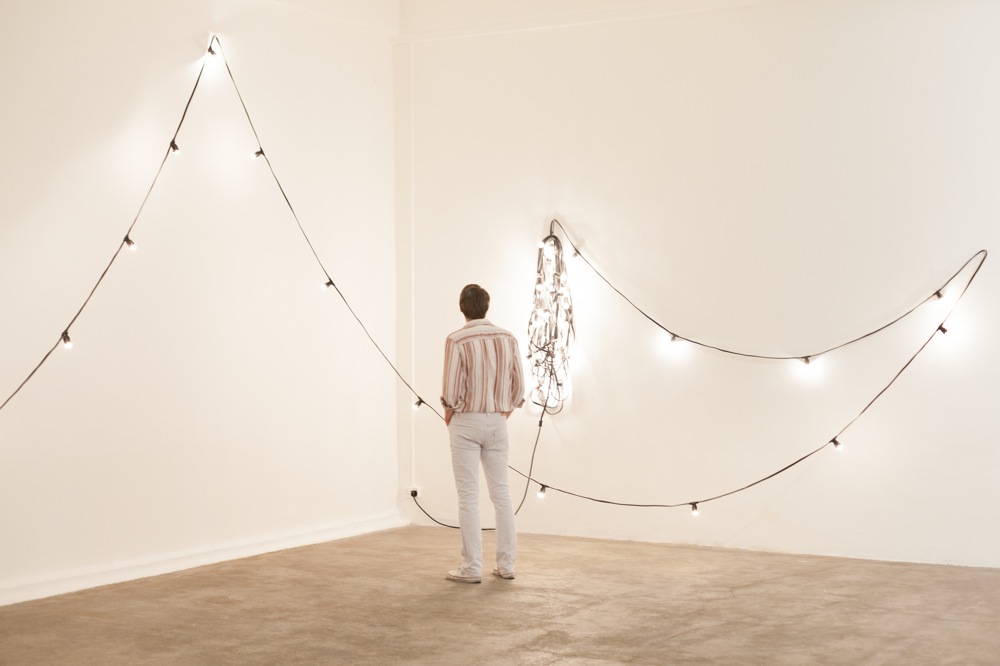 Within the controlled volume of the art gallery, Pica’s pieces resonate softly together, without jostling; the room is studiously arranged, confidently spare. In the overhead space and in between the works, circulating air seems alert to the crackle of potential transmission. Still, the spatial emptiness of the gallery describes a lack unfulfilled by the waylaid, fitful longing of these various attempts to communicate, no matter how indirectly.

Perhaps the greatest risk identifiable in Pica’s practice, then, is the imperfectly incessant desire to both hear and speak – without any guarantee of a sympathetic address, reply, or other meaningful exchange. Pica’s patient waiting game seeks neither validation nor instant gratification, informed by the wisdom of living and the loneliness which imbues contemporary means of (im)personal communication, despite surface connectivity. That Pica’s performances and sculptures never fully achieve the poetry of perfect mediation is yet another clear signal; that human relations might find their best collective expression outside the realm of the visual, even outside art.