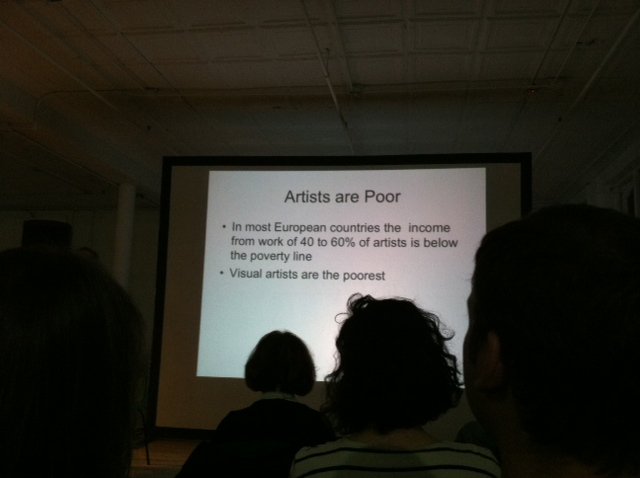 Earlier this month, Dutch artist/economist Hans Abbing, author of Why Are Artists Poor: The Exceptional Economy of the Arts, lectured at Artists Space, the first of a series of open forums organized by W.A.G.E. Artists John Powers and William Powhida attended the event. I asked over email for their thoughts on the talk - JM:

I didn't read Hans Abbing's book, but I did listen to his lecture carefully, with an ear to the fact that he is an economist, and that he's a Dutch economist, not an Austrian one. So when he voiced his suspicions of subsidies, he is doing so as someone who comes from a nation with a lot of subsides for the arts, it was clear that Abbing is not Friedrich Hayek. He was, for instance, very quick to say that it was unfortunate that all Americans don't benefit from universal health care. I do think the title of Abbing's lecture was misleading. the subject he seemed to be addressing best was not why artists are poor, but why aren't artists like other poor people - when he talked about that I found his ideas really interesting.

Abbing observed, "artists are what a Marxist might call less “alienated”; that statistically we (artists) have the educational and family backgrounds similar to professionals, but that choosing to become (and remain) an artist defies the logic of a career choice. Abbing said art does not seem to be a choice, but something that artists feel compelled to do despite the obvious economic downsides- that art is less a profession and something closer to a "vocation": something we are called to do, and that we are able to answer that call not because we come from wealthy families, but because we come from families that don’t count on us for financial support (this jibes with the artists I know).

What I got from Abbing, was not that with more subsidies come more artists, but that no reasonable amount of subsidies will raise artists out of poverty because of the low value we (as a group) put on not being poor. I don't see that as an indictment (Abbing may), I see it as a very hopeful sign. As societies grow more affluent, I very much like the idea that more people self-identify as artists. Perhaps that means that the End of History is a bunch of happy, well-educated poor people.

Because there is so little attention given to fine art by economists I very much enjoyed hearing an economist’s ideas applied directly to the world of galleries and artist studios, rather than trying to glean lesson about the artworld from economist’s descriptions of drug dealers and cabbies. For that reason alone, I’m glad Bill invited me to join him that night. 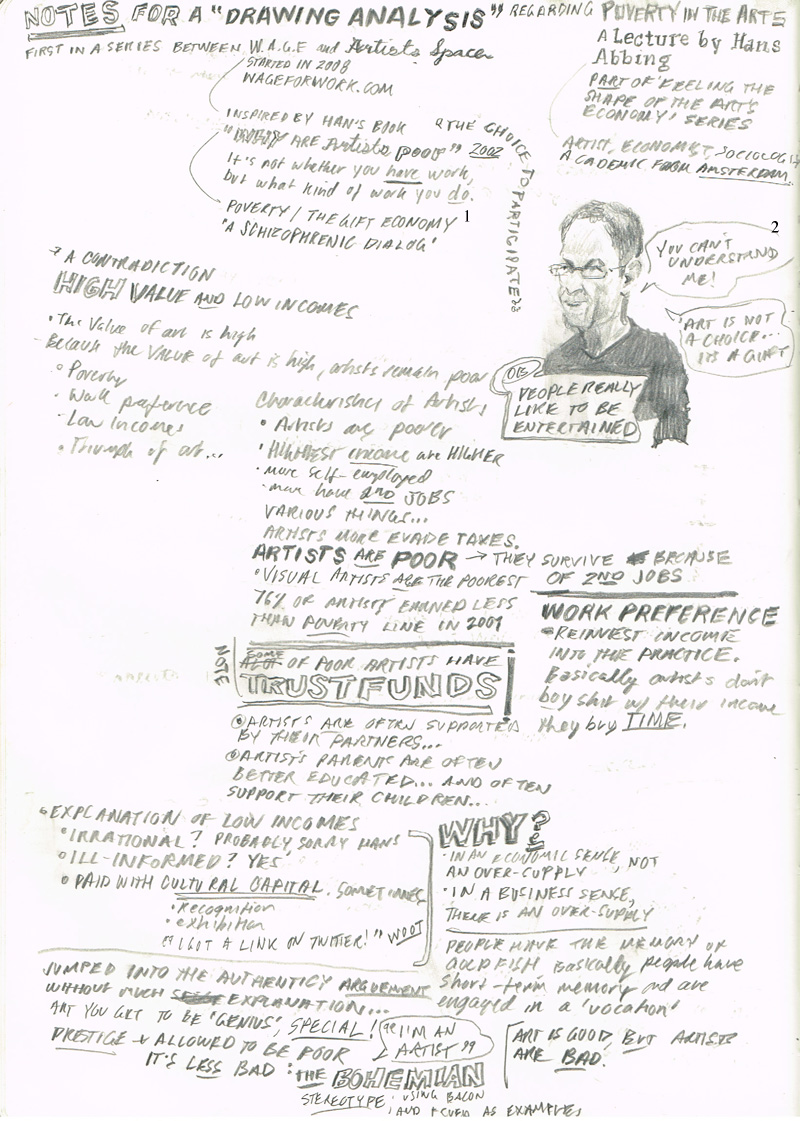 William Powhida's notes from the lecture

When W.A.G.E recently proposed a collaboration around this series of open forums, I was introduced to the writings of Hans Abbing. When I first read Poor Artists, a chapter from his forthcoming book, Value of Art, I recognized many of the paradoxical and contradictory relationships between ‘being artist’, as Abbing defines it, and income.  While I agree with critic Ben Davis that Abbing’s conclusions in his earlier book, Why Are Artists Poor, about the value of subsidies for the arts are flawed, I found Abbing’s writing to be a valuable  attempt at demystifying stereotypes of poverty in the arts.  It also provides some perspective on how and why poor artists are able to persist and even celebrated when we consider poverty to be a social problem, not the result of specific choices, or a ‘work preference’ by artists over consumption.  This aspect of Abbing’s writing is what inspired W.A.G.E, not his explicit conclusions that government subsidies in Amsterdam do not raise the overall incomes of artists (Or as Davis argued with John and I after the lecture that it subsidizes the wrong kind of art, conceptual art, in Abbing’s conservative view).

Unfortunately, I found Abbing’s fragmentary lecture to be much less effective than his written analysis.  The lecture ended up confusing, boring, and even antagonizing the large audience and it was (painfully) clear that not only cultural differences contributed to this, but also his lack of understanding of the contemporary art market in the last decade.  His choice of anecdotal descriptions including references to ‘greedy dancers’ and ‘disliking poor people’ added to the tension with the audience, who I felt were hoping for more radical solutions to the glaring problem of income inequality in the arts, which is effectively concentrated into the hands of a small group of super star artists,yet is still equated with certain kinds of success and failure.  Given the recent efforts OWS arts-related groups like Occupy Museums and Arts and Labor, Abbing’s lecture came across as rather conservative and frustrating.

For me, despite the problems with Abbing’s lecture or conclusions about subsidies, his writing serves an important role by explaining how the ‘exceptional nature of art’ leads to seemingly unresolvable paradoxes including the persistent denial of economic activity associated with art.  This traditional denial of the commercial aspect of art, which is seen as a threat to its autonomy, makes it difficult to even discuss issues like income inequality or artists’ fees.  The value of Abbing’s analysis is not in his conclusions,  but in his particular effort look clearly at the economic and sociological dimensions of the artist’s vocation, and not deny them through our shared language.  We don’t call collectors ‘consumers’ or galleries ‘shops’ because we don’t want art to be a product or a commodity, we want it to be a cultural gift free from commerce.  W.A.G.E chose Abbing because they are both suggesting that we need to talk about the ‘dirty’ and impure parts of art; that it’s work, that it involves money, that people run businesses, and that we need to ask impolite questions about finances and money.

The positive results already emerging out of Artists Space are an encouraging sign that those in power; directors, curators, board members, etc., need to hear directly from the people, the artists, creating the very objects, ideas, and performances upon which the institutions depend.  It should be painfully obvious, but Artists Space doesn’t exist without artists including unknown, emerging, and underrepresented artists whose practices may not serve the market.  So, W.A.G.E has started a discussion that asks us to talk about the parts of the art that we often minimize or pretend aren’t really important, because art isn’t about money, right?  It’s deeper, more profound, autonomous, and Sotheby’s doesn’t exist and there are no art handlers currently locked-out from their jobs either while precious objects trade for millions.