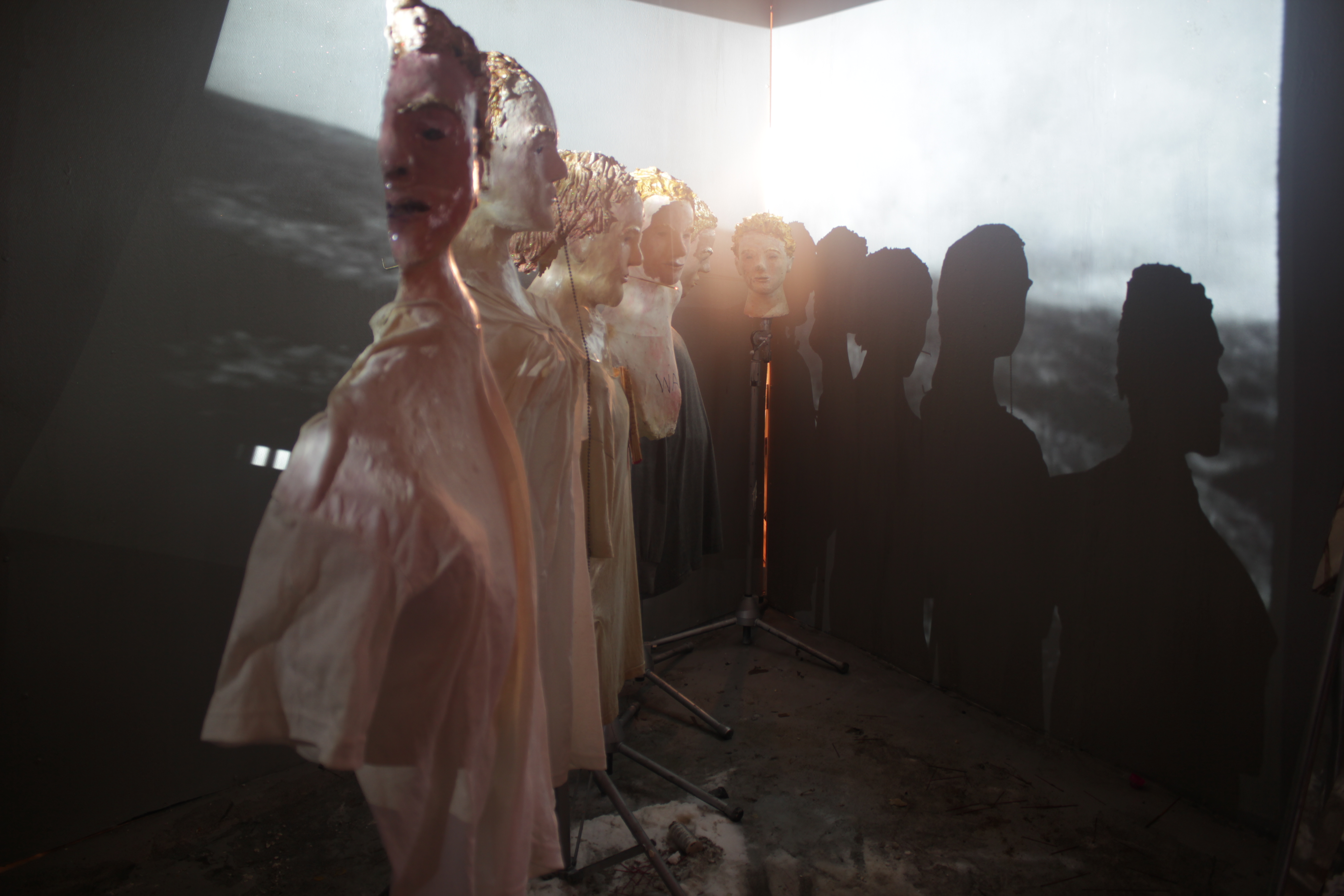 Your work calls to mind surrealist cinema, and seems nostalgic in a way, for the earliest motion pictures.  What, if anything, are you drawing from the past?  Do you feel you are reinterpreting the past by using modern technological tools to create the work?

I don’t think of my work as surrealist. Surrealism presupposes an ordered, sensible world where something foreign or fantastic has intruded. The reality created in my video is so far removed from the reliability of a real world concept like gravity or time that it is hard for me to think about it relating to surrealism. There is definitely a relationship between early cinema and my current work, but I would not characterize it as nostalgic exactly. I am interested in the methods, pace, and intensity of early cinema. I’m not trying to use these archaeologically. Films like Dreyer’s Passion of Joan of Arc, or Eisenstein’s Ivan the Terrible have a pulverizing intensity. Nikolay Cherkasov in Ivan, and Maria Falconetti in Joan of Arc are almost in trance states as the film unfolds around them. There is a tension in early cinema that I find hard to match, and try to build in my work.

Much of your work includes a still, lone figure amidst a changing environment.  When there are multiple figures, like the busts in Anna, there's a sinister or disharmonious feeling.  Is there something to this in how your characters operate or relate?  Do you think of cinematic roles with these figures?  How do you incorporate your references (to literature, documentary, and more)?

The interaction of characters can sometimes be sinister, cold, or terse. The characters I develop tend to be workman-like in their tasks or roles. I also think there is a very dry gallows humor, romance or intimacy, and sense of everyday doldrums in these characters. The way they relate to each other is the way I feel most people interact. I definitely consider each character playing a role—the damsel-in-distress, an Edgar Rice Burroughs explorer, plucky sidekick, or reluctant hero. Incorporating references is not something I try to tack on to the work. Sometimes I have a specific film in mind that I try to channel, or a piece of a recognizable image. As I work on a piece, particularly video which takes the better part of a year to shoot and edit, I watch and re-watch the same films, or re-read the same book. Elements seep into the work via osmosis.

For Anna and The Ascent of Man, you showed the videos alongside characters, objects, and even living things from the film itself.  Seeing them in the film while seeing them in life somehow broke a wall, almost confusedly: they're distant settings that you grow intimate with over the course of seeing the work, but then, they're in the room to be related to (or not).  Would you talk about your decision to do so?

Showing objects from the video in a space is a very different experience from watching the video itself. In many ways it’s like taxidermy. Tracking, shooting, capturing, and finally when you’ve gotten this elusive creature, you want the trophy, a remembrance, fixed in time. The live character is deflated and transformed into a monument, embalmed in the mausoleum of the gallery. I’m sentimentalizing here, but it feels more than a little bit like this. I’m not totally sure yet if showing objects from a video alongside the video itself is for my own satisfaction, or for the viewer’s.

I have been working with technology since high school. My first videos were made as educational videos for my school. In my free time i started experimenting and remixing the videos with the analog beta decks and my first found footage montage was made when i started learning digital editing.

Using a camera is a lot like using a canvas for a painting. Each frame is a sacrosanct image. I excessively investigate each angle and vista in a scene, like Cézanne and his mountain. I came to use the tools I do by process of elimination.

I graduated from SUNY Purchase with a BFA in Sculpture, and took my MFA at Columbia.

Much of my process is rooted in traditional media. Setting up shots for animation draws on theatre, painting, and early cinema methods. The materials used in the tableau I shoot are varied, but have included anything from salt, plaster, matchsticks, and Baroque busts to cheapo Animatronics. The activity of collecting, jury-rigging, assembling materials also fits into a tradition of making and aesthetics that is quite old fashioned. The relationship between traditional and technological is in one sense happenstance, in other ways, it is deeply considered.

Are you involved in other creative or social activities (i.e. music,writing, activism, community organizing)?

I teach at SUNY Purchase where I went to school. Teaching there allows me to share my experiences as an alum and hopefully add something to the community of young artists.

What do you do for a living or what occupations have you held previously? Do you think this work relates to your art practice in asignificant way?

I’m a professor teaching video and editing. Before I became totally invested in art production, I was a chef. There is some simpatico in the process of cooking and the process of art making.

I have collaborated with Uri Aran, Ronnie Bass, and Sam Clagnaz. I have worked with each individually on video projects, and also engage in critical dialogue with them regularly.

Not especially. I am aware of the artists with whom I am contemporary and try to see where I might fit in with them, and in a historical continuum of artists. But I don’t study art history regularly.

Do you read art criticism, philosophy, or critical theory? If so,which authors inspire you?

I have read the standards of critical theory, philosophy, etc., Levi-Strauss, Deleuze, Zizek, Adorno. I don’t find particular inspiration in this type of writing. Most of my reading is guided by the interests with my work. Right now I am reading a lot of pop psychology. There is something fascinating about the experiments clinical psychologists perform. Recently I read Strangers to Ourselves by Timothy Wilson.... I would really like to get him on camera.......but I might just have to fake it.

Are there any issues around the production of, or thedisplay/exhibition of new media art that you are concerned about?

I am mainly concerned with calling it "NEW" because since it is constantly evolving perhaps we should just call it technology.  A sense of newness seems like a dated concept in general every second of every day there is something newer than what we can conceive at this moment as "new". The feeling of excitement people get when they experience a fresh technological development I think has more to do with manipulative advertisements playing off our social/sexual desires. I work with moving images evolving since telling stories around a campfire .