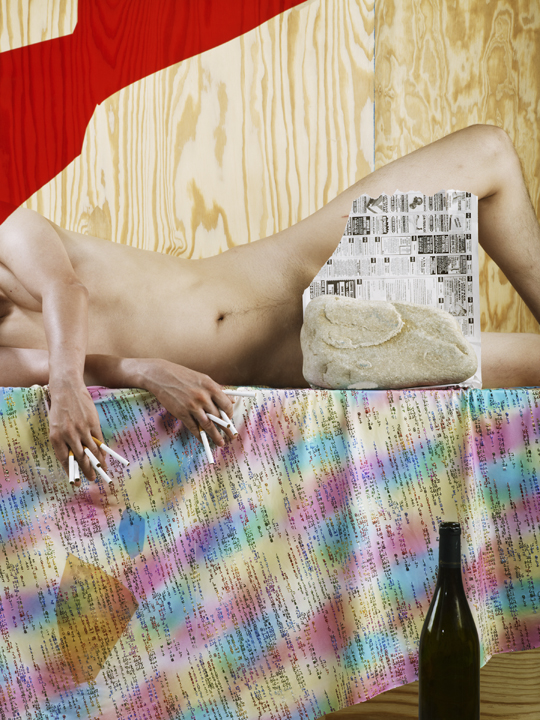 When I decided to start working in way that combined the nude and the still life genre, I quickly found I wasn’t comfortable treating women as objects, so within that series I worked exclusively with men. Using male bodies has the advantage of the fact that the male is the agreed-upon neutral subjectivity for our culture—a “default” setting. The male body therefore can be a blank slate in a way the female can’t.

As for painting, in Re:Re:Re:Re:Re: I was primarily focused on the nude in popular media and not really thinking about the history of painting. Of course painting has informed photography throughout its history, so a certain dialogue between the two is built in.

What's the process behind your Recent Work (2012)? Do you consider these a post-camera form of photography as opposed to a more traditional collage?

In the pictures you’re referring to, about 10% of the elements in the pictures are appropriated or solely generated by computer, without a camera.  Examples include the grid backgrounds in Reverse Wallpaper and Re:Re:Re:Re:Re:Re:Re: and the two appropriated images of football players in the latter picture. What appear in the rest of the series are things I photographed specifically for this body of work or for the previous series--I appropriated my own work. What I did here actually questions what “postcamera” could mean rather than being postcamera itself.

In terms of collage, I don’t view them as that way at all. If anything they’re closer to photomontage—I mean, they are photographic images, not pieces of paper. I know people use “collage” very generally, of course. But, for example, when people use green screens (which was one of the techniques I used here), they drop images into images. Does this make all green-screen work collage?

I've read the phrase "deadpan tableaux" in relation to your work. How do you reel about the relationship between the style of your images and the objects within them, and how do you think this relates to the tone of your work?

I don’t cultivate a look, style, or tone--it’s all symbiotic with what I’m photographing. I do try to avoid symbolism and metaphor, which is why I think my work has been referred to as “deadpan.” I want the objects to be what they look like and through repetition enter that very contemporary state where something is both full of meaning and meaningless. It’s like a quantum state—the cat is half dead, half alive.

I’m always pleasantly surprised when people find humor in the work. Still, it’s not something I consciously set out to do, I think it’s just the inclinations I have.

David Velasco wrote about your use of Paz de la Huerta as an impostor version of you at Rob Pruitt's Art Awards in 2010. Aside from the implications of that act within the medium of photography, as Velasco described, did you think of that action as a kind of commentary on celebrity and the art world?

Sure. I felt like they would be happier if a celebrity was there as opposed to an artist, so that’s what I gave them. I had to let the Guggenheim’s PR department know that Paz would be there so that she would be admitted in my place. They agreed to keep her attendance confidential to help preserve the gesture I was trying to create, but then they went ahead and told the press that Paz was going anyway, which confirmed my hunch. 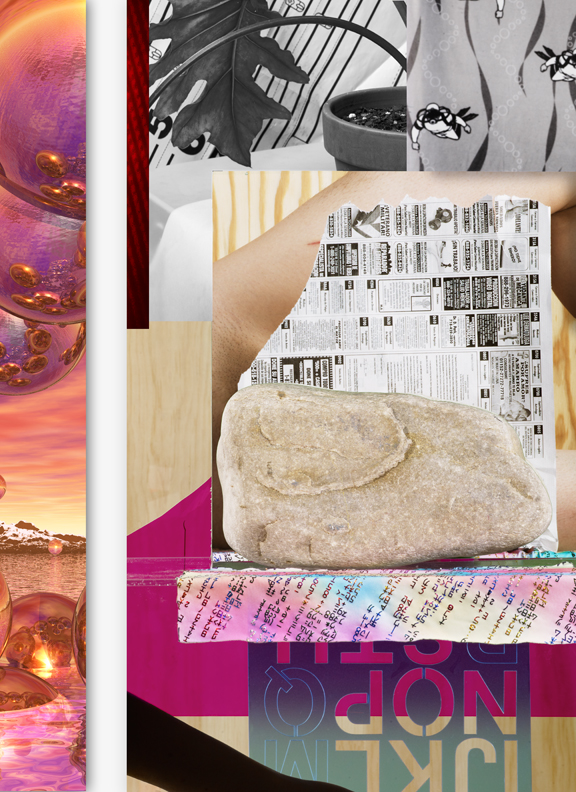 Around age 12 I would talk to people in early chat rooms.  I created an alternate persona for myself--I was a young woman named Cassandra.

Describe your experience with the tools you use.

I’m going to say my tools are the camera and the computer. I hate sitting at the computer. There’s constant distraction, and often I feel like I fiddle too much with my work in order to avoid figuring out what I really need to do. I don’t have any problems with my camera, on the other hand. I love working digitally and am happy to say goodbye to film.

How did you start using them?

Cameras and computers are everywhere. You can’t avoid them.

Where did you go to school?

Yale for an MFA

What traditional media do you use, if any?

Are you involved in other creative or social activities (i.e. music,  writing, activism, community organizing)?

No. I’m not good at multitasking or coordinating with more than one person in an “official way.”

What do you do for a living or what occupations have you held previously?

I teach adjunct at a couple NYC universities, and I do a commercial photography job here and there. Besides that I’ve worked at a bagel store/deli, waitressed, worked equipment room at photography rental studios, and I’ve assisted commercial/art photographers.

Do you think this work relates to your art practice in a significant way?

Probably in some way.

Have you collaborated with anyone in the art community on a project?

For about two years, I’ve collaborated with Margaret Lee on paintings. She’s an artist who runs the gallery that represents me. Watch out boyz.

I didn’t study art as an undergraduate, so I feel like I’m always catching up.

Do you read art criticism, philosophy, or critical theory? If so, which authors inspire you?

One thing I read recently that I really liked was Object to Be Destroyed, Pamela Lee’s book on Gordon Matta-Clark.

Are there any issues around the production of, or the  display/exhibition of new media art that you are concerned about?