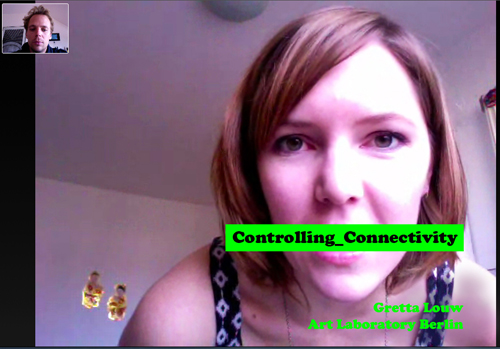 An artist living in a gallery for the duration of a show is a trope of visual art performance, which left a mark in popular culture portrayals of performance art. Even though these works emphasize considerations of the gallery space, the relationship between the artist and the audience is not always the center of the piece. In the iconic I Like America and America Likes Me, Joseph Beuys was rushed from the airport to a New York gallery in an ambulance and left in an ambulance, leaving the US without having set foot on its soil.* Tracy Emin lived in a locked room in a Stockholm gallery as part of Exorcism of the Last Painting I Ever Made in 1996. The audience could only see her naked figure through fish-eye lenses embedded in the walls as she spent her days painting.

In a new project launching November 2, Berlin-based artist Gretta Louw takes this relationship two steps forward, one step back. Like Beuys, she could not be seen at the gallery, but like Emin, she will be viewed through a lens. Twenty-four hours a day for the ten day duration of the show, Louw will be in constant communication with her audience via different online platforms: Skype, Facebook, Twitter, and so forth. The project, Controlling_Connectivity, is described on Art Laboratory Berlin's site,

Controlling_Connectivity uses the pervasiveness of internet-based social networking, as well as the obligation and opportunity for constant connection with these platforms as a paradigm for a severe and systematic disruption of normal, socially accepted patterns of life and interpersonal interaction during a self-documented performance. Taking to its natural extreme the notion that new technologies are increasingly dictating our social interaction, professional life, and have a far reaching effect on many other aspects of daily life, Gretta Louw will complete a durational performance, living in the gallery space in complete isolation except for contact through various social networking sites and the internet.

Reading and hearing about this project, I was surprised that in the decade since JenniCam or weliveinpublic.com (both late 90s lifecasting experiments, but whereas Jennifer Ringley's JenniCam became a cultural phenomenon, Josh Harris's weliveinpublic.com was framed as a conceptual art project and ended citing mental, personal, and financial losses) the culture of constant connectivity was not more critically commented on in the art around me. I can think of numerous examples of direct streaming of performances, liveblogging, constant twitting, etc., but not of many examples of a critical practice that examines these platforms in and of themselves. This is what Louw is hoping to do.

And Louw seems to be in good company these days. Tate Modern is launching BMW Tate Live: Performance Room, a series of artist performances created specifically to be broadcast live online. Catherine Wood, curator of contemporary art/performance at Tate Modern, writes that this initiative marks a shift from thinking of online streaming as "a secondary way of accessing the live program and to think about it as a primary space in which the artists can present work and perform." Again, the actual performance room at Tate will be closed to the public, who will be experiencing the performance directly online. The relationship between performance art and online presence offers so much, that it is about time for it to be further complicated, questioned, and surveyed.

I'm looking forward to Gretta Louw's webcam series, but I have a huge issue with anything related to Joseph Beuys in this article. Did the author find the information about Beuys' performance from Wikipedia? Beuys was notorious for creating myths to surround his life and work. More than myths about I Like America and America Likes Me (1974), which the author of this article refers to as "I Love America," and how Beuys never talked to anyone in the States during this performance, both egregious in their own right, I just want to say that this article needed a little bit basic art historical fact-checking.

Thanks for changing the title of Beuys' performance. I'm glad to have been of service.

"Like Beuys, she could not be seen at the gallery, but like Emin, she will be viewed through a lens." Have you guys ever seen this video (http://vimeo.com/29225407)? It's baller. I don't understand how Beuys "could not be seen at the gallery" when the performance was caught on film and reviews were written about it. Beuys could be seen by a lot of people; you can even hear hecklers in the film. Visibility wasn't an issue here.