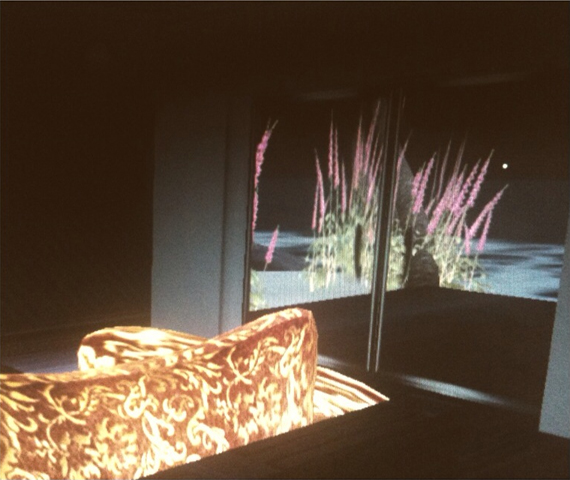 Much of your work seems concerned with the psychological and political dimensions of interior domestic spaces whether from second life or craigslist apartment listings. What sort of spaces do you enjoy working in? Or what would be your ideal space to work in?

I enjoy the spaces of everyday life whether they be real or virtual. These include landscapes and domestic spaces. Every new space is ideal, because it has its own logic and its own story.

Projection Monitor frequently includes images of translated, scanned and often distorted plants and natural landscapes. Has your explorations in digital environments and contexts changed your perception of physical nature ('in reality')?

I make comparisons between physical and virtual nature all the time. I have the same syndrome as when you've played a video game non-stop for days and the game effects the way you perceive your surroundings. For the past year I've been documenting Second Life nearly every day, so it's only natural for there to be a virtual spillover into reality. The practice of photographing a virtual world has directly informed the way in which I photograph real life spaces to the point where I generally gravitate towards spaces that could exist in Second Life. I've been very much involved in the process of documentation for the past year. For the past 2 months I've been looking back at this documentation and creating series based on the Projection Monitor and real life photographs I have taken. I recently released a series called 'Plant Classification' on Computers Club that contains various plants and landscapes found in Second Life.

Tremblexy uses projections to create sound environments and the second life recordings include internet radios left on in the background - a concern for space and ambience seems equally paramount in your flourishing body of musical work. When creating pieces like Transom does the space or sound precede one another or do they develop alongside each other?

The sound for each video piece I make happens differently. When I create a new video I work very fast and lose a sense of time and my surroundings. I work non-stop until the piece is complete. Sometimes I'm unsure of how I got from point A to B. I believe I created most of the sound for Transom after the video was made, although I'm not entirely sure. I made the piece in a day, so it's a bit of a blur. The sound for Niodraradeveloped alongside with the video and the sound for Otha was created after the video was completed. I record a lot, so I have a database of sounds I use as a starting point to help feel out the ambience I want my video to take; similar to how a composer will place demo music to a film before scoring.

Do you think that digital constructions of nature and practices that document those constructions such as yours can be a means of supporting nature?

Right now, I'm more interested in making observations than conclusions. I take and collect photos, label, group and archive them. Maybe in a few years I can better answer the question if my documentation can be a means of supporting nature. But speaking of staking, a particular aspect of planting trees and shrubs I find to be interesting are the regulations that go along with landscape planning. There are aesthetic rules that are set up in neighborhoods, particularly subdivisions, where an owner of a house is limited to what they can plant and the distance each plant must have from the next. A thuja bush 3 feet away from the next. The houses and yards within a subdivision look the same because of budgetary restrictions. Developers use standard materials and finishes because they are cheaper to buy in bulk. Roads and sidewalks are built in a grid because it requires more skill to construct roads that curve which would increase labor costs. The style of houses will slightly vary, where the houses are mirrored replicas or where rooms are placed a bit differently from its neighbor. These neighborhoods are simply made with copy and paste techniques created in a 3D model space. Once a developer has set up standards for their subdivision, they will carry those standards into a new subdivision they will build a few months later, slightly altering the finishes on the copied and pasted objects. Eventually the subdivisions become the new landscape of a town. The construction of subdivisions has been occurring for over 60 years and is nothing new, but the difference now is that these landscapes are taking on the aesthetics of a 3D rendering. I find it fascinating and scary at the same time. Google: “Eton City”. 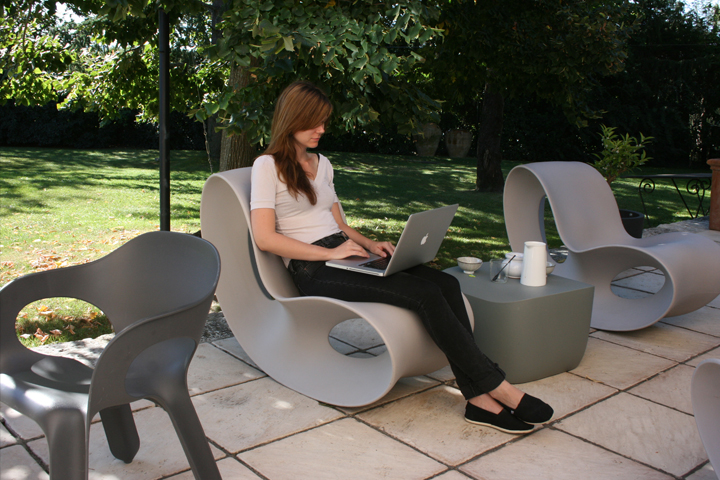 I began recording music and experimenting with video in 1994 and using computers in 1998. I got a Tascam Porta 07 for Christmas. I was too impatient to read the manual, so I learned by pressing buttons until it worked. My mom had a closed circuit surveillance system she was no longer using for her business, so I took ownership of it. It wasn't until 1998 when I began recording the video by shooting the images off of the surveillance monitor. I learned Photoshop in my high school art class and began making printed books of images I had created. They consisted of variations of one image that had been put through every filter Photoshop 4.0 had to offer.

My computer and iPhone are the primary tools I use. I shoot all photos and video with my phone. I began using the computer for non-linear editing in 2000 while in college. I started with Premiere 5.1 then went on to learn Media 100, then went back to using Premiere. I also learned After Effects and BBEdit a year later. I started to use the computer to make music/sound in 1999 using Cakewalk. I then used all the Sonic Foundry programs, Fruity Loops, Reason and Vaz Modular. Eventually I ended up recording instruments using Pro Tools and not using software as much to create sounds.

I have a BFA from The School of the Art Institute of Chicago. I went for painting but ended up studying in the video, sound and art + technology departments.

I draw landscapes and patterns with ink on paper. I've incorporated some of these as decorative elements into my digital collages.

I have a musical project called Tremblexy with Austin Meredith. We've been playing and recording since 1999.

Interior Designer on 3 year break/VJ/Freelance Miscellaneous. They directly relate to my practice.

I've collaborated with Nicolas Sassoon on several projects. We recently created an installation at 319 Scholes in July called “Wallpapers”. We've also collaborated on 2 videos. He created an animation for one of Tremblexy's songs called “Magmatic” and I scored one of his animations called “Headquarters”. We have a list of collaborative projects we'd like to do in the future.

I read what I find to be relevant to my interests at the time.

Do you read art criticism, philosophy, or critical theory?

I prefer to discuss art and philosophy with others than to read about it. However I will read whatever interests me on the internet.

Having your browser in full screen mode when looking at an artist's website and/or work is nice.