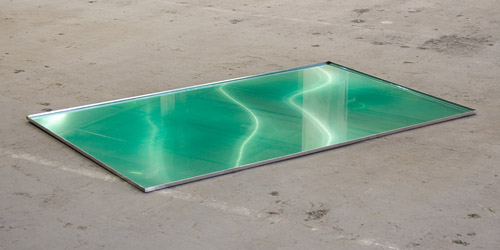 "Performance Anxiety" was curated by artist Nicolas Djandji, who tragically passed away in a bicycle accident in September. A number of his friends took the research he conducted in the last few weeks of his life and grouped in order to finalize the administrative tasks necessary to complete the show and fabricate new works by artist Steve Bishop, Ben Schumacher, and Timur Si-Qin.

The artists featured in "Performance Anxiety" all deal in their works with the consumer culture of bodily self-improvement. Using quotidian products—deodorant, mouthwash, Vitamin Water—their works show how a trip to the pharmacy can tell us something about the way we live today and our value systems. From the press release:

Here, the notion that the pursuit of athletic, hygienic, and professional perfection should be sought through the constant purchase of new products is cast into doubt. Through a series of works arresting these normally utilitarian, performance-enhancing products in sculpture, Performance Anxiety waxes upon the paradoxical, collectively shared desire of the present-day individual to become superhuman–physically fit, sexually attractive, and immaculately groomed—by way of altering the body’s chemistry and obscuring its most basic functions. Contextualizing these items as aesthetic elements rather than functional goods, each artist carves a meditative space reflecting upon the absurd modus operandi of these products.

A press release so intelligently written—that speaks specifically to the artists' works and practice while tying them in with the exhibition's theme and art historical traditions—is rare. And it seems that as a space Stadium is embarking on an interesting path with this exhibition, as its stated objective is to critically engage contemporary media and its effect on new methodologies of display and distribution of art in the context of the exhibition space.