Past and Present in "Strange Simultaneity": Mark Fisher Explains Hauntology at NYU
By Rhizome 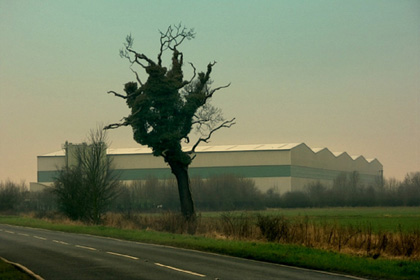 If I might extrapolate from what Simon calls these 'comments on half-erased or never-quite-attained songform': perhaps Ariel Pink's appeal is that his sound musters the sonic equivalent of the 'corner of the retina' effect that the best ghost stories have famously achieved. To understand what this entails, we need to reverse, or at least nuance, the commonplace which has it that the ghost is at its most scary only when it can't fully be seen. To say this implies that the ghost could be made the positive object of apprehension. Yet spectres are unsettling because they are that which can not, by their very nature (or lack of nature), ever be fully seen; gaps in Being, they can only dwell at the periphery of the sensible, in glimmers, shimmers, suggestions. It is not accidental that the word 'haunting' often refers to that which inhabits* us but which we cannot ever grasp; we find 'haunting' precisely those Things which lurk at the back of our mind, on the tip of our tongue, just out of reach. 'Haunting refrains' we are compelled to simulate-reiterate are sonic objets a around which drives circulate.

To return to Mike's point, we can now begin to see why it is important to think of the 'negative' aspects of Ariel Pink's sound not as the covering over of porcelain-perfect pop in fuzz and scuzz, but positively, as the means by which an anamorphic sonic object is produced. The anamorph, remember, can only be seen when looking askance, out of the corner of the eye.

In this respect, Ariel Pink has much in common with Jessica Rylan, who should be added to the hauntology canon forthwith. After seeing Rylan live last year, I referred to 'the beguiling illusion of a sonic object that would be perfect if only you could hear it more clearly. Yet the 'perfection' is an effect (a special effect, you might say) of the blurring and distorting techniques themselves.' I made similar observations after seeing Ariel Pink live, writing of 'a deliberate fogging of the digitally hyper-clean, with the result that what you are hearing is as much doubt and speculation as anything else.'

Why hauntology now? Well, has there ever been a time when finding gaps in the seamless surfaces of 'reality' has ever felt more pressing? Excessive presence leaves no traces. Hauntology's absent present, meanwhile, is nothing but traces....

Thirty years ago "should sound ancient," Mark Fisher said at the first of two presentations for NYU’s “Colloquium for Unpopular Culture" on May 4th. "Think about what thirty years means —or what it used to mean. That's the difference between pre-rock'n'roll 50s and post-punk." Fisher, author of Capitalist Realism and editor of The Resistible Demise of Michael Jackson for Zer0 Books, teaches at University of East London, Goldsmiths, University of London, and the City Literary Institute. His blog k-punk covers digital culture, speculative fiction, and speculative realism among other concerns. For over five years he’s steered conversations on — the topic of that evening’s lecture— hauntology. Jacques Derrida coined the term “hauntology” in Spectres of Marx (1993), describing the accumulation of ghost-like traces of the past as we move further in the future. Fisher applies this term to describe music with a particular nostalgia, sometimes sounding indistinguishable from that which was composed decades ago. “Time out of joint” as Hamlet said to Horatio. Perhaps an inevitable symptom of this condition, Fisher’s 2006 comments on hauntology remain relevant five years later. So “why hauntology now” —still— in 2011? Fisher started his talk mentioning a conversation he had with Simon Reynolds, author of the upcoming book Retromania, regarding Darkstar's cover of a 1982 Human League b-side. The song is unique for reasons beyond the band's "curatorial act" of “resituating it in contemporary electronic music culture.” While Darkstar may be “more advanced technically,” when it comes to the overall aesthetic "neither sounds more futuristic."

The Human League - You Remind Me Of Gold
The difference, he explained, is Human League preceded the future while Darkstar arrived after it. But these sounds from the past and present seem in “strange simultaneity.” “I have a better sense of the 1973 sound and texture than 2003 —not because I ceased to pay attention, but because culture and time relation has changed.” Music typically marks time. But “something odd is happening” if you can imagine Darkstar or Amy Winehouse or the Artic Monkeys performing decades in the past without any sense of disjuncture. This “flattening sense of time” appears to Fisher as a byproduct of what Marc Augé called “non-places.” The airports, retail parks, franchise coffee shops, and other homogeneous buildings absent of local flavor are indeterminate temporally as well as locally. Fisher brought up Chris Petit’s film Content, for its depictions of non-places. The film is of particular significance to him as its footage of a container port was filmed not far from his home, more than an hour's drive from London. As he wrote in Sight and Sound:

At one point in Chris Petit’s haunting new film Content, we drive through Felixstowe container port. It was an uncanny moment for me, since Felixstowe is only a couple of miles from where I live – what Petit filmed could have been shot from our car window. What made it all the more uncanny was the fact that Petit never mentions that he is in Felixstowe; the hangars and looming cranes are so generic that I began to wonder if this might not be a doppelgänger container port somewhere else in the world. All of this somehow underlined the way Petit’s text describes these “blind buildings” while his camera tracks along them: “non-places”, “prosaic sheds”, “the first buildings of a new age” which render “architecture redundant”.

Content could be classified as an essay film, but it’s less essayistic than aphoristic. This isn’t to say that it’s disconnected or incoherent: Petit himself has called Content a “21st-century road movie, ambient”, and its reflections on ageing and parenthood, terrorism and new media are woven into a consistency that’s non-linear, but certainly not fragmentary.

Content is about ‘correspondence’, in different senses of the word. It was in part generated by electronic correspondence between Petit and his two major collaborators: writer Ian Penman (whose text is voiced by the German actor Hanns Zischler) and the German musician Antye Greie. Penman’s text is a series of reflections on the subject of email, that “anonymous yet intimate” ethereal communication. Some of Penman’s disquisitions on email are accompanied by images of postcards – the poignant tactility of this obsolete form of correspondence all the more affecting because the senders and addressees are now forgotten. Greie, meanwhile, produces skeins of electronica that provide Content with a kind of sonic unconscious in which terms and concepts referred to in the images and the voice track are refracted, extrapolated and supplemented.

Fisher ended his presentation discussing the music most closely associated with the term hauntology — Burial, The Caretaker, and artists on the label Ghost Box. The Caretaker with its distant ballroom melodies from the 20s and 30s, takes its name from a famous line in The Shining (a film dripping with hauntological significance.) Burial, however, looks critically at a more recent time — the 90’s rave and drum’n’bass scene. Fisher called Burial, “the Edward Hopper of our time.” The lyrics and titles of his songs are self-aware of the nostalgic expression of scratch and crackle. The music Burial samples and mimics was ecstatic at the time, but he transports listeners to the underbelly — the “sense of dilapidation, broken glass, and empty warehouses,” the morning after a rave party. Responding to a question from the audience about his UK-centric examples, Fisher explained Los Angeles-based Ariel Pink was one of the first artists mentioned as an example of sonic hauntology. Then again, the UK has a particular history starting with the BBC Radiophonic Workshop. Extremely strange experimental music composed by Delia Derbyshire and others found its way into people’s suburban homes. Fisher called it, the “greatest penetration into everyday life of experimental music.” It was a “utopia we actually lived in.” Ghost Box artists, drawing from “library music” samples, are in many ways re-dreaming this past. Fisher did not talk about hauntology as it applies to photography, but the Instagram and Hipstamatic iPhone app toy camera mimicry is yet another example of contemporary culture restless in temporality. The topic has fascinating artists like Harm van den Dorpel. Likewise, William Gibson and Bruce Sterling writing on atemporality in the digital age, find the specter in fashion and design. If “history has run out,” as Fisher says, hauntology only grows more relevant as years go on.

"Human League preceded the future while Darkstar arrived after it. But
these sounds from the past and present seem in 'strange simultaneity.'"
“I have a better sense of the 1973 sound and texture than 2003 —not
because I ceased to pay attention, but because culture and time relation
has changed.”
Music typically marks time. But “something odd is happening” if you can
imagine Darkstar or Amy Winehouse or the Artic Monkeys performing
decades in the past without any sense of disjuncture."
I'm not sure if this was addressed at some point, but the fact that 1973 has engrained itself into the present exponentially more times, since it occurred, than 2003, could have something to do with why sounds from 1973 seem richer and more contextualized than those from 2003. I disagree that "something odd" is neccessarily happening if you can imagine some modern acts performing in the past without a sense of disjuncture—the past is a "thing" that is necessarily distanced and packaged conceptually, so mentally placing something within it squarely and saying it fits perfectly is easy to do—theoretically. It has always proven true thus far that we are able to look back at art and artists and feel that some were "ahead of their time." But no one necessarily realized that during their time—they weren't recognized as proof that culture was moving forward. So why would we recognize those things now?

I think the points discussed by Fisher can be attributable to the simple fact that bands now are hyper-aware of recent music history. The millions in development money spent in the music technology industry developing analog modeling synths and retro effects plug-ins promise to make even dabblers like Darkstar sound just like a synth-pop band from the 80s. Similarly, recording techniques since the late 90s have largely focused on recreating the sound of anitquated recordings. If there is anything "odd" happening, it's that there is now more nostalgic synth-pop from the last 4 or 5 years than there is original synth-pop from back then.
I think it's simply too easy for music, being a non-tactile art,  to be "haunting". I understand Fisher is quoting a cool term from Dererida, but if he's saying more than that, I'm not seeing it. To set this apart as special phenomoemon is simply a stretch. I have to admit I have not read Fisher's blog. Does he offer better evidence than the vagueries above?