In May of 2010 Netflix posted what appeared to be two internal test movies shot around the Netflix headquarters in Los Gatos, CA. Titled Example Short 23.976 and Example Short 24, the films could not be found by simply browsing the Netflix site, but were instead picked up by users of unofficial twitter feeds and websites that update with each new streaming title. At slightly over 11 minutes long, the film features a kind of in-house stock footage intended to demonstrate a variety of audio-visual effects, such as time-lapse and looping. The short film also includes a series of strange, non sequitur scenes featuring a hand running through a fountain, a toy train set running on a loop, a man moonwalking while holding a laptop, the same man running erratically between trees, and finally the man reciting Marullus' speech from Act I, Scene I of Shakespeare's Julius Caesar before shifting to a series of popping and clicking mouth noises. The film ends with a blinking white dot and a series of gridded test patterns.

The films can be difficult to find using the Netflix site, but each version of the movie has its own page and is open to view and review. Much as with the Three Wolf Moon "power animal" t-shirt that gained massive popularity on Amazon.com in 2009, users began rating and reviewing the films sarcastically as artistic works rather than technical footage, praising the symbolism of hand-in-fountain or critiquing the film's "blatant liberal agenda." Other reviewers seem to have missed the punchline, rating the film poorly and demanding an explanation for the film's otherwise glowing reviews. Netflix has subsequently released the short in a variety of forms and at various lengths, in one case looping it for a full eight hours in a version that many viewers compared to Andy Warhol's 1964 film Empire. In another case the film was compiled into "a sample show with many episodes" titled Example TV Mega-series 700, containing exactly 700 episodes.

While the reviews are enjoyable by themselves, it's also interesting to see users speculate as to what purpose the videos serve. In some cases the purpose seems obvious: 23.976 and 24 clearly refer to video frame rates, as 24 frames per second is standard for film projection, and when film is transferred to an NTSC television the rate is effectively slowed to 23.976 FPS. But what about the dozen or more permutations that have appeared since these first two films? Perhaps the eight hour epic is intended to test audio synching over long periods of time, or perhaps the Mega-series 700 is intended to test the Netflix interface for the navigability of long-running television series. This kind of user-driven speculative software analysis hints at the processes through which "film" becomes instantly available online streaming video. We've compiled some particularly illuminating reviews below: 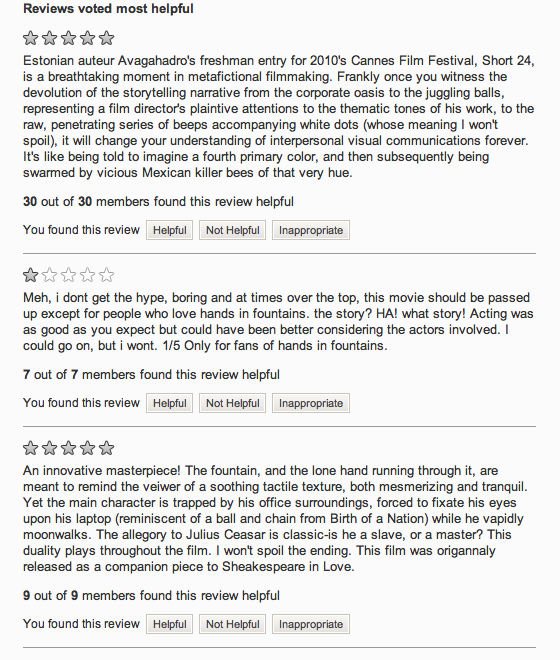 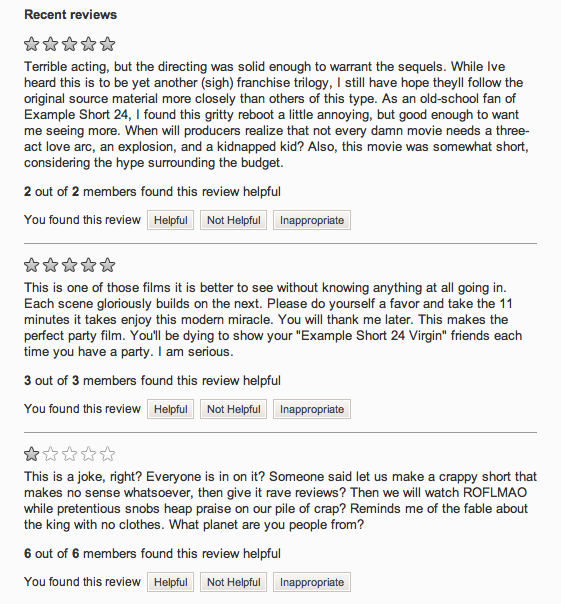 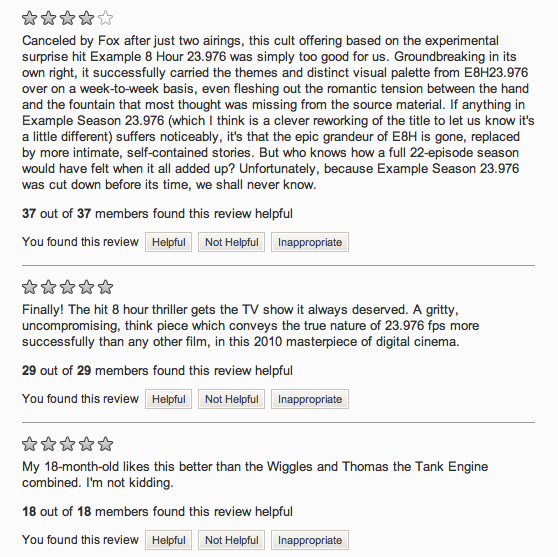