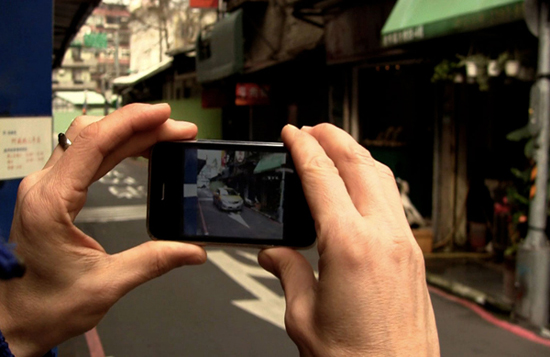 Lets turn into a narrow street where it’s dark and less busy. I can’t catch it when the sun is shining. We need grey days for this. Here it comes, all by itself. Small, bigger, bigger, whoosh, smaller, smaller. Nice! Now some stillness. I double behind your shoulder. Me, the rear view mirror. Objects are gone before they appear. Small, big, bigger, whoosh, vanished. Keep going now. We’ll run into it again by coincidence. Waiting makes no sense. Remember the sign? “no relax no easy”. I count until twenty. No. No. No. No. No. Yes. OK. Replay. The object is replaced by the object that was removed. Cherry Crap. The bus drove in. How absurd. Where is that bus coming from?

eteam's Track One, screened at the Migrating Forms festival last month, is now available online. eteam, a collaboration between Franziska Lamprecht and Hajoe Moderegger often explore the tension and developing relationship between the real world and the virtual world. In 2008 they received a Rhizome Commission for Second Life Dumpster, a project that highlights the levels of consumption and disposal in the virtual world. The pair constructed an evolving virtual garbage dump, a repository for deleted objects tagged with a custom decay script written by the artists. In Track One, weaving together various global locations, they similarly assemble real and virtual properties to create an amalgamation of the physical and virtual worlds.