A Report from Trust: Media City Seoul 2010
By Jeanne Gerrity 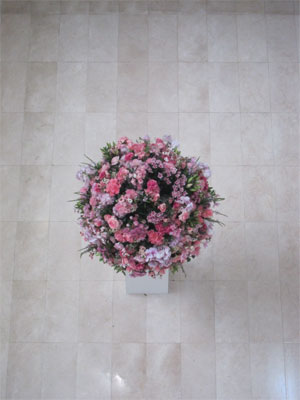 The first physical art work that you encounter when entering “Trust: Media City Seoul,” the sixth edition of Korea’s international media arts biennial, is Willem de Rooij’s Bouquet VII, a collaboration with local florist Kim Da Ra. A large-scale spherical gathering of blossoms in various hues of pink stands on a pedestal, resembling a centerpiece at an upscale wedding or a museum benefit party. The floral arrangement seamlessly integrates natural and synthetic flowers, blurring the boundary between the real and the artificial. Innocuous and timeless, this work sets the tone for this year’s Media City, an exhibition that eschews the embrace of new technologies in visual art in favor of a return to more traditional media and a broader definition of the term “media” itself. Bouquet VII also subtly introduces a method utilized by many of the artists in the exhibition: the conflation of fiction and reality.

For “Trust,” the three international curators—Clara Kim of REDCAT in LA, Nicolaus Schafhausen of the Witte De With in Rotterdam, and independent Tokyo-based curator Fumihiko Sumitomo—under the direction of Sunjung Kim of Artsonje Center in Seoul made the unexpected decision to remove the underscore from the longstanding original title of the biennial, changing it from media_city to Media City. This deletion symbolically removes an earlier emphasis on net art. In an even bolder semantic move, they discontinued the use of the subtitle “International Media Biennale.” Instead, the curators sought to re-conceive the term “media,” focusing more on media as a form of disseminating information (as in “news media” or “popular media”) than a commitment to new technologies in art.

Oddly, the title “Trust” and the topics of the accompanying catalogue essays seem only tangentially related to the actual work in the exhibition. From social networking to online banking, the curators posit that a certain level of trust is necessary for daily functioning in a world dependent on technology. The curators set the context for art production today through their philosophical musings, but the work in the exhibition does not directly address these issues, instead they are connected by typical biennial themes of globalization, border divisions, and place. Documentary video, film, and photography are prevalent, and many of the works operate in the ambiguous zone between reality and fiction.

Despite incongruities between the theme of the exhibition and the artwork itself, the exhibition design is refreshingly spare, and many of the individual art works are conceptually strong. Divided between four venues centered around the Seoul Museum of Art, the majority of the works by 46 artists from 21 countries are excellent, and the exhibition manages to avoid the erraticism of most biennials. 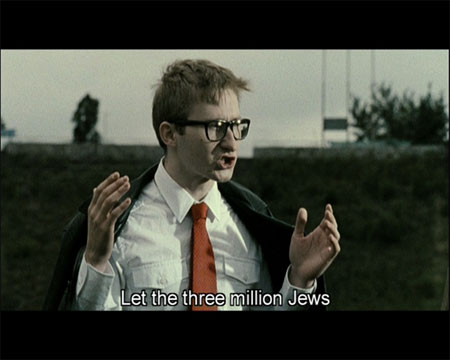 One of the first works in ”Trust” is Allan Sekula’s series Polonia and Other Fables (2009). On view are 30 color and 10 black and white photographs, interspersed with 18 quotations related to Poland from sources as diverse as Jean-Jacques Rousseau and Alan Greenspan. Focused on Polish communities in Warsaw and Chicago, this series encompasses several of the underlying concepts behind the exhibition, most notably the diasporic effects of globalization. One color photograph illustrates three generations of men seated together: a small boy, an elderly man with a cane, and a middle-aged man (the artist’s father, uncle, and nephew). The boy holds a partially unfurled, frayed Polish flag, and the living room location is at first ambiguous, but closer examination reveals the books on the shelves in the background are in English, suggesting a Chicago setting. Sekula’s series unites documentary photography with imagined narratives, a frequent tactic in the exhibition.

On the same floor, Yael Bartana’s two films, Mary Koszmary (Nightmares) (2007) and Mur I Wieza (Wall and Tower) (2009), consider another issue in contemporary Poland: the repatriation of Jews. Emblazoned on the wall in a bold red in the entrance to the two films is a seal that interweaves the national coat of arms of Poland, an eagle, and a Jewish star. The powerful Mary Koszmary, filmed in the style of Nazi propagandist Leni Riefenstahl, is the first film in the fictional trilogy (the third film is yet to be completed). A clean-cut young Polish man stands on a podium in a nearly empty neglected stadium in Warsaw, addressing a small group of uniformed Polish youth in a booming speech advocating the reintegration of Jews into Polish society. The second interrelated film shows a group of young Israeli men and women building a Jewish settlement in Warsaw. Bartana successfully integrates the different elements of the film through the repetition of the invented insignia on the armbands of the Jewish volunteers and the appearance of the orator from Mary Koszmary in Mur I Wieza. 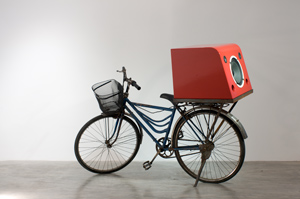 The second and third floors of the museum veer from the directly political into the more metaphorical side of media and globalization. A television set plays Kim Beom’s Untitled (News) (2002), a playful look at news media, while Tuan Andrew Nguyen’s Hip-Hop History Sampling Hip-Hop History: The Red Remix (2008) suggests the influence of popular media on contemporary youth. At less than two minutes, Untitled (News) is a fast-paced mash-up of clips from cable news programs, edited to form new sentences. The video challenges the monopoly of TV news to disseminate information, constructing alternate narratives. Nguyen’s work consists of a vintage Vietnamese bicycle equipped with a custom-built speaker playing a remix of dozens of American hip-hop songs that include the word “Vietnam” in their lyrics. Mimicking a method of spreading propaganda in Vietnam, the sound sculpture examines the image of the country in western popular culture. The work illustrates the desire of Vietnam’s new generation to move past its ineluctable ties to a major war in American consciousness and gain a new relevance in mass media. 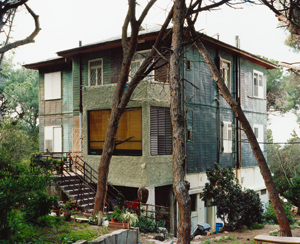 Emphasis on the significance of place repeatedly appears throughout the exhibition. In a room on the third floor, Annette Kelm’s photographic series Prefabricated Copper Houses, Haifa, Israel, 1933-1935 (2009) and Ziad Antar’s eight black-and-white photos from the project Beirut Bereft (2009) both suggest the significance of buildings in historical memory. Kelm’s nine photographs document houses that were moved from Germany to Palestine in the 1930s as the result of a Nazi scheme to move German Jews out of the country. Antar’s series depicts monolithic imposing structures built in Beirut in the 1970s, 1980s, and 1990s, but abandoned prior to completion due to the civil war and used as temporary structures to house militia. In this series, the empty ominous buildings represent a future unfulfilled on account of a brutal and destructive war. Both Kelm and Antar’s photographs signify populations divided and destroyed by religious conflicts. In an adjacent room, Tobias Zeloney’s nine minute animated film is composed of 7000 photographs of a housing project at night in a town near Naples, Italy. Disjunctive and urgent, the flashing shots briefly illuminate menacing concrete structures with furtive glimpses at its abject inhabitants. 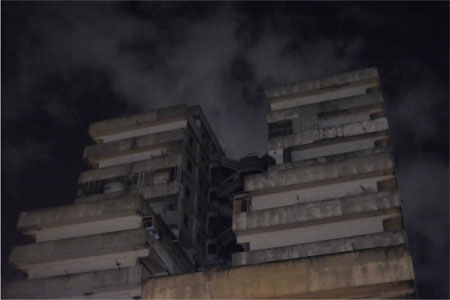 One of only a handful of sculptures in the exhibition, Shilpa Gupta’s Singing Cloud is a welcome respite from the more literal political works in the exhibition. Suspended from the ceiling, thousands of microphones form an amorphous shape that chants and whispers phrases meant to represent unconscious thoughts. The work is the result of a collaboration with Harvard professor Mahzarin Banaji exploring the cognitive unconscious and its role in creating prejudice and fear.

A short walk from the elements of the expansive main venue, the Gyenghuigung Annex houses five video installations, including an impressive iteration of The Primitive Project by acclaimed filmmaker Apichatpong Weerasethakul. The artist combines constructed footage of male teenagers in Nabua, a small Thai town on the Laotian border. Targeted as a Communist holdout in the 1960s, Nabua was once the scene of persecution and violence, leaving the town with a disproportionately low number of middle-aged men. Weerasethakul follows the male sons of these disappeared Communist farmers, creating fictional scenarios in a context stripped of memory. The version installed in Trust opens with a book of narratives, drawings, and photographs, and then proceeds into a dark room with three hanging screens, two projections, and one wall-mounted monitor. Together the videos form a landscape of quiet simplicity, while headphones offer a soundtrack of breezy Thai pop music reminiscent of carefree teenage days. In the last room one video continues the narrative of the young men at play, while another enters a mythic night world inhabited by a flaming widow ghost. The Primitive Project conflates fiction and documentary, while obliquely referencing Thailand’s recent political strife. 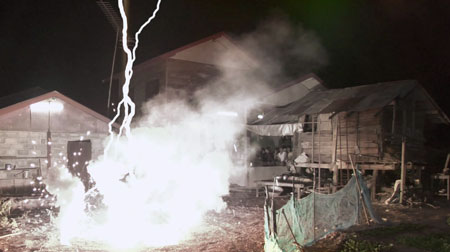 Weerasethakul’s installation is a compelling end to an exhibition that focuses on recent work in video, film, and photography. The strength of “Trust” lies in its ability to seamlessly mix documentary techniques with visual appeal. An example of this successful integration is Walid Raad’s found video I Only Wish That I Could Weep (2001/2002). The work shows a sunset over the beach, but its source is more complex. According to the artist, the video was shot by a Lebanese army intelligence officer meant to be watching for an assigned target on a beach road in Beirut. Whether or not the secret agent is a fabricated character becomes irrelevant: the video speaks of the universal longing for simple beauty even in a time of war. In a world torn apart by political and religious conflict, the artists in this exhibition are able to look critically at current and historical events through a unique viewpoint that never loses sight of imagination and desire.

Jean-Luc Godard once remarked “reportage is interesting only when placed in a fictional context, but fiction is interesting only if it is validated by a documentary context.” The artists in “Trust” combine the techniques of social documentary with both personal and universal subject matter in order to tell stories: stories that are political, romantic, mundane, momentous, tragic, funny, singular and communal. Sometimes the stories are based completely in historical fact, and other times they exist only in the artist’s imagination, but most often they are a combination of the two. The artists in "Trust" expertly use the media of film, video, and photography to present the viewer with works that speak of the contemporary moment and the recent past in ways that are unique and specific but still succeed in reaching a wider audience.

Jeanne Gerrity is an independent curator and writer based in San Francisco. She recently completed the Gwangju Biennale International Curator Course.

Oddly, the title “Trust” and the topics of the accompanying catalogue essays seem only tangentially related to the actual work in the exhibition.