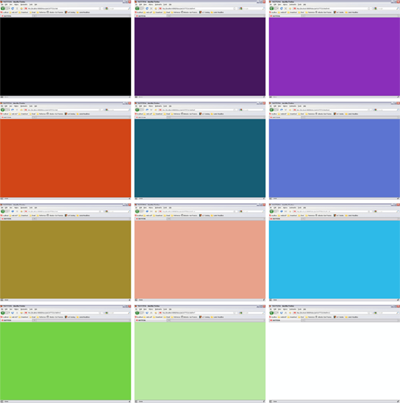 16777216 is a new online work by Richard S. Mitchell, a San Francisco-based artist with a background in video. 16777216 is viewable through the Jancar Jones Gallery's website from August 28th until September 4th, click here to see it. The work consists of over 16.7 million frames, each a color in the RGB color model, displayed at 25 frames per a second. Colors are displayed when the web browser synchronizes with the server, where the colors slowly move from black towards white.


Your project 16777216 launches on the Jancar Jones Gallery's website this week - can you talk a little more about this project - what are you trying to achieve with this work?

I've been interested in using the Web as a medium for art for a long time. By medium I mean the place, center, and means of production, and not simply as a way to distribute work produced elsewhere. One early idea was a dynamic HTML spinning beach ball, using the inherent capabilities of a Web browser to display color and change its display over time, even without interaction from a user. I didn’t follow through on the beachball because I felt it was too much a one-liner, not multi-dimensional.

Issues surrounding sequencing, series, and serialization have been a major point in my video work for several years now: including numbers, text, and colors (from color sample sheets, etc.). Obviously, the RGB system is a numbered sequence of colors with many possible routes through it depending on how you map the total number of colors, a 24-bit number, to each of the 8-bit channels, which are semi-independent.

My goal with 16777216 is, on the one hand, to make tangible certain aspects of the computer’s representation of reality and, on the other, to produce a work pleasing to look at and contemplate.

What are some of the techniques you've used in your video work to address serialization and sequencing? Are your videos analog or digital - does this difference in format come into the conversation at all?

At this point my videos are entirely digital. I am striving, however, for an aesthetic that relates to film but isn't merely imitating it. In my latest video Zing, all the images are digital but I processed them only in ways analogous to film processing: double exposure, negative/positive, fades and dissolves, looping, etc. I uploaded 'Zing' to my website today.

I scan a lot of stuff and use scripting in Photoshop to generate the video frames. The material I scan ranges from 8, 16, and 35mm film to sheets of plastic or paint. I'm also partial to things which form series like color samples and color correction cards. I collected my bus transfers for several years and used them in a count down sequence, mimicking the countdown you see on video/film. I also use Max/MSP Jitter for audio and visual processing.

I still collect images and objects that have some property of sequence. I'm also turning my attention to close examination of things and patterns around me---common things, visual and audio---that I can investigate, speed up, slow down, magnify, and convert to sequences.

“Red, green, yellow, blue, white, brown, violet, orange, turquoise, grey … a list of colors such as this ends almost as soon as it has begun, but there are in fact twelve thousand colours in existence, like cockleshells all in a row. Think of it. Maybe it is not possible to tell them all apart, but they are there all the same. They exist in the catalogue of an American company which produces plastics, and their purpose is to guarantee a constant production that will always satisfy the needs of the market….

“How does one arrive at such a vast number of colours? There are various methods…. So we may in theory set about obtaining a great number of colours in the following way: let us imagine a red which contains not even the most infinitesimal quantity of yellow, blue, or other colour. Take this red … and paint a disc as big as a penny on a very long strip of paper. Add one drop of black to the red and paint another disc. Then another drop, another disc—and so on until the red has turned black. On the same strip, working towards the other end, paint other red discs, but this time progressively lightened by the addition of white, one drop at a time. By the time we have finished we will be extremely tired and our strip of paper will be several miles long. We can then repeat the operation starting with another red, for example with one drop of yellow added to the original pure colour. Then we start with a red with two drops of yellow added….”
—Bruno Munari. Design as Art. 1966.

When I read the Munari essay it seemed a perfect fit, strategy, or solution, to bringing out the properties of computer color and display we don't normally notice—the huge number of colors and their sequence and structure, and how they are tied to numbering/counting. I wanted to reveal this, to make it palpable, tangible. Something you can watch.

In the past, you've worked primarily in film and photography - when did you decide to also implement the internet into your practice? Have you worked on other online projects?

I have been working on Web stuff for a long time. The first website I built, in 1995, was to display works by me and other artists involved in a group I belonged to called untitled. As the number of artists on the site grew, the problem of keeping the data up to date and correct led to my interest in content management development. I had been working as a programmer since the mid 80's and was familiar with databases. So it seemed natural to use a database to manage the content of a site. (Incidentally, I'm an artist who took up programming, not vice versa. I went to college intending to major in chemistry but graduated with a degree in fine art/painting and almost a minor in music.)

It strikes me there are two ways of using the Web for artistic purposes: as a form of production and/or as the means of distribution. My early efforts focused on digitizing existing works and publishing them on the Web. One could also create the works digitally, but that site of creation is still outside the browser. I wanted to use a partnership between the page code and the browser itself as the site of creation. As I say this, it seems rather difficult to assign clear boundaries to where creation takes place. The idea arises in my head; I code it, test it, code it some more; I distribute it over the internet; the browser parses the code and displays the work. Is there an analogy here with painting or film? Or is video art more analogous? In this case it’s self-generating, purely iconic, i.e. with no indexical or symbolic dimension.

16777216 uses the Web for both production and distribution: the piece 'performs' in a web browser, is distributed via the Web, and is synched through the server. No matter where a user/viewer is, the 'performance' happens at the same time, discounting network latency and inaccurate clocks on clients.

this piece is seriously weak. it's a great example of the state of "new media": over-intellectualization of directionless tinkering. i expect better from rhizome and jancar jones.

Stephen, I dig criticism especially when it's strong - suicides my social life all the time. Lets hear a little more about why exactly you hold this opinion of the work. I am curious because it seems overly irritated and unlike the kind of "new media" (that's the web2.0 participatory kind - conceptual art is another thing I thought) that I would expect to see here.

Plus, it doesn't work in any of my browsers on win7 in Australia (that means pretty slow broadband). Stops moving and goes back to blue once it gets to pink, and repeats ad infinitum.

No, I spoke too soon - it just broke free.

why has rhizome posted this shite?