In the inverted world of glitch art, functionality is just a sterile enclosure of creative space and degradation an agent of renewal.

Such was the spirit in the air at GLI.TC/H, a five-day conference in Chicago organized by Nick Briz, Evan Meaney, Rosa Menkman and Jon Satrom that included workshops, lectures, performances, installations and screenings. Intuitively, most people involved with new media know what glitch art is - it’s art that tweaks technology and causes either hardware or software to sputter, fail, misfire or otherwise wig out. Narrowing in on a more precise definition can be perilous, though. Purists would insist on a distinction between art that uses actual malfunctions and art that imitates malfunctions, but the organizers of GLI.TC/H took a catholic approach to their programming.

A concern with the histories and pre-histories of glitch art pervaded the conference. In her lecture and presentation, Rosa Menkman offered an avenue for one possible genealogy, juxtaposing Len Lye’s A Colour Box(1937), a kinetic film consisting of scratched and hand-painted celluloid, Nam June Paik’s famous Magnet TV (1965), a television with a magnet placed on top to distort the signal, Cory Arcangel’s TH42PV60EH Plasma Screen Burn (2007), a plasma television with text burnt into it and Jodi’s Webcrash2800 \%SCR2 (2009), which consists of cracked LCD monitors. As celluloid gave way to cathode ray tubes, which gave way to plasma screens and liquid crystal displays, every mutation seems to have been accompanied by a desire to break the screen, to draw out some of its essential properties; properties which either weren’t reckoned with by its makers or were purposefully hidden.

Joan Heemskerk and Dirk Paesmans, who work under the name Jodi, are clearly spiritual ancestors of modern data corrupters. In addition to being Skyped in for the closing lecture and discussion, Jodi’s piece Untitled Game (1996-2001) was displayed at the GLI.TC/H gallery show. Untitled Game consists of 14 variations of the video game Quake 1, all of which push the game to the border of illegibility, re-ordering the code in such a way as to make abstractions of the original material. But what remains in the work is the element of interaction; the arrows will have some effect on what’s presented on the screen, sometimes even giving you the feeling of moving forwards and backwards, side to side. One modification renders the pixels in a grid-like black and white, giving the feeling of moving through a Frank Stella painting with kaleidoscope sunglasses.

Interactive work was frequent at the GLI.TC/H gallery opening, and is in some ways a natural move for glitch artists. The promise of psychedelia (a genre that glitch work often flirts with and sometimes belongs to) is the promise of empowering the viewer through a disruption of their routinized modes of perception; and where empowerment is a goal, interactivity is never far away. One of the most interesting interactive works was a live datamoshing installation by Bob Weisz, Paul Korzan and Tom Butterworth. Weisz co-authored Chairlift’s Evident Utensil video and made the YouTube datamoshing tutorial How to Datamosh. The group’s installation consisted of a live video feed which would datamosh every 60 seconds. In addition, there was a microphone that sped up the datamoshing process when spoken into. What resulted was a kind of hypnotizing narcissistic feedback; you watched your face distort in accordance with your voice. 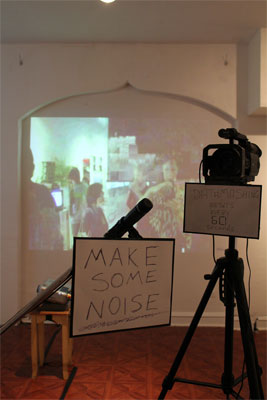 An ethic of interactivity also guided the day of workshops at GLI.TC/H. Where a 16mm experimentalist like Phil Solomon imperiously guards the secret methods he uses to erode and reorganize film emulsion, glitchers seem eager to share their strategies. Part of this probably has to do with the fact that many new media artists are code junkies who come directly out of the open source movement; but then the open source movement may have equal roots in functional programming and media art. 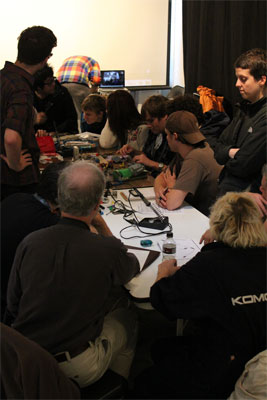 In the first workshop, Patrick McCarthy and Alex Inglizian showed how to break open electronics and do some elementary circuit bending, providing participants with a straightforward approach to hardware hacking. Nick Briz’s workshop took a more unconventional tack, blending technical and philosophical instruction. Briz has created a codec that purposefully glitches files; but instead of making the program itself publicly available, he’s made detailed instructions for how construct the program publicly available, and included with these instructions his thoughts on art and copyright laws. Following in the footsteps of Dan Sandin and Phil Morton’s Distribution Religion, a booklet on how to build Sandin’s Image Processor that included early anti-copyright agit-prop, Briz’s “Glitch Codec Tutorial/Workshop” is utopian not only in its anti-corporate provocations, but in its belief that democratizing the tools of digital expression can enfranchise people and turn passive consumers into active producers. 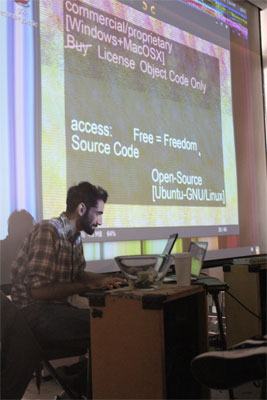 Briz’s other piece at the festival, a remix of Rosa Menkman’s A Vernacular of File Formats (2010), played as a tongue in cheek throwback to structural cinema. Vernacular of File Formats - R3M1X (2010) scrolls through Menkman’s pdf at 24fps, creating a flickering tour of various kinds of digital disruption. Menkman’s Vernacular was itself displayed at GLI.TC/H’s gallery show, and was certainly one of the event’s exemplary works. Literally a lexicon of compression artifacts, Menkman’s work has an obvious affinity with Hollis Frampton’s Artificial Light (1969), a compendium of film processing effects.

Menkman also screened two movies; Radio Dada (2008) and The Collapse of PAL (2010). Dada is a swirl of glitched video feedback set to a calming techno-beat by Extraboy. The Collapse of PAL may be Menkman’s most ambitious video to date. While celluloid fetishists are still mourning the discontinuation of their beloved Kodachrome, with this work Menkman has assembled a loving eulogy for Phase Alternate Line analogue television coding. But this eulogy insists that formats never really die - they live on as echoes in subsequent media. Composed partly of haunting landscapes filtered through a broken camcorder, Collapse is overlaid with text from the point of view of Benjamin’s Angel of History. “PAL slowly vanishes in these eerie ruins,” notes the Angel, “only to survive as a trace left on other connections, crashed and collided, this is where PAL’s history can still be found.”

Tatjana Marusic’s Memory of a Landscape also, as the title suggests, tied glitches to history and memory. A series of landscape panoramas from old films that dissolve into an impressionistic smorgasbord, Marusic’s blunt title points to an essential truth. Corrupted digital files aren’t a metaphor for personal and cultural memory, but a synecdoche for it. It’s not just that blurred data reminds us of how objects and events recede in our minds over time, but that data files are actually used to store our memories for us - and as glitched files illustrate, this particular form of memorization is not immune from the distortions associated with human memory.

GLI.TC/H took a heady, philosophical turn with Curt Cloninger’s lecture, “GltchLnguistx: The Machine in the Ghost / Static Trapped in Mouths.” Cloninger wants to erase the distinction between our idea of language as a fixed system and language as a series of utterances. Language only enters the world, he argues, through our intoned, marked, performed use of it. Once we’ve gotten rid of some idea of a “pure text,” we’re left with the conclusion that meaning can never be divorced from what Cloninger refers to as an utterance’s affect. As texts make their way to us through digital intermediaries, these intermediaries in part determine their affect, which in part determines their meaning. Glitch art, then, becomes a magnifying glass put up to the affective disturbances in modern communication and thus is essential, in Cloninger’s view, for understanding how meaning is made in modern culture.

Speaking of affect, a lot of pop insouciance could be found at GLI.TC/H. Two different artists presented hacked Nintendo systems; no-carrier giving a lecture on the subject and noteNdo giving a lecture and a live performance. no-carrier made the point that many audience members can remember savoring the moments in their childhood when their video game systems would glitch, offering up a glimpse at the hidden world of data structuring this new mediated experience. Indeed, the pixel structure of old Nintendos is probably woven deep into the subconscious of the generation growing up in the 1980s, a fact which makes no-carrier and noteNdo’s hacks into kinds of willfully regressive fantasias.

In a similar vein, Jimmy Joe Roche’s Power Wagons may represent the next logical step of the MTV aesthetic, a possibility I personally have some ambivalence about. Pure pop psychosis, Wagons is a mash-up of Charles Manson, Shana Moulton-esque faux-new-ageyness, Hitchcock’s The Birds and flickering, datamoshed color fields. This was probably the most immersive video at GLI.TC/H, a full frontal retinal assault, with Roche offering a Paul Sharits to Ryan Trecartin’s Jack Smith. 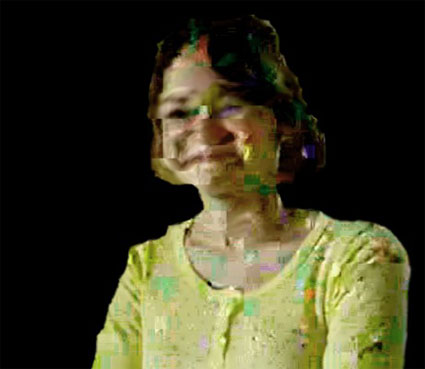 A more critical approach to popular culture was presented by Theodore Darst’s I Corrupted Miley Cyrus. Darst glitched the tween idol and silhouetted her on a black background, deforming her features and stranding her far from her adoring crowd. “I Corrupted” recalls Dubuffet’s inversions of the classic female form and, like Dubuffet’s paintings, highlights the aggression inherent in acts of objectification.

The closing lecture by Jodi was an interesting way to end the festival. A common anxiety regarding glitch art is that it might just be formalism with an inhuman face; a rehash of abstract expressionism filtered through cracked code. While some glitch artists might be comfortable with this, many would not be. In a certain light, Jodi did little to dispel this kind of thinking; their discussion was shot through with echoes of Greenbergian aesthetics. Paesmans spoke of his rejection of representing three-dimensional space and of Jodi’s video game detournements as a search for a flat and literal space to wipe out the original illusionism. It’s interesting in this context to take note of James Peterson’s observation, in Dreams of Chaos, Visions of Order, that Greenbergian thinking can find itself in a strange dance with Barthesian meta-critique. Barthes formulated his idea of ‘myth’ this way: “Semiology has taught us that myth has the task of giving an historical intention a natural justification, and making contingency appear eternal. This is exactly the function of bourgeois ideology” (Mythologies, 142). Now, Peterson points out, “Myth does exactly the opposite of what Greenberg suggests modern art does. To paraphrase Greenberg in Barthesian vocabulary, modern art has an anti-mythical or anti-ideological function: it demonstrates that aspects of work that were previously accepted as natural and necessary were actually cultural and contingent” (Dreams of Chaos, 88). And as the politics of glitching were mulled over at the conference, this seems to be what the machines were whispering, or screaming, in our ears: that what we call content is the real accident and accidents are the true reality.

Tom McCormack is a critic, artist and curator based in Chicago. His writing on media has appeared in Cinema Scope, Moving Image Source and The L Magazine.