A Conversation with Graham Harwood and Jean Demars on Coal Fired Computers at SPACE, June 1st
By Lisa Baldini

On June 1st media theorist Matthew Fuller will interview Graham Harwood and Jean Demars at SPACE in London for the Coal Fired Computers project by Harwood and Yokokoji (YoHa) that recently premiered at the AV Festival in New Castle, UK. For Harwood, every media used has a series of power relations that comprise its media ecology. The thread that seems to bind his oeuvre is exposing these power structures. (For more, read an interview with Harwood by Michael Connor, published last year to Rhizome.) Continuing with his examinations into the conditions of the marginalized and working class, Coal Fired Computers speculates about the "global fuel reliance, the price of a computer measured against the lives of 318,000 miners with choked up lungs." The work consists of a bank of computers powered by a coal-fired boiler. 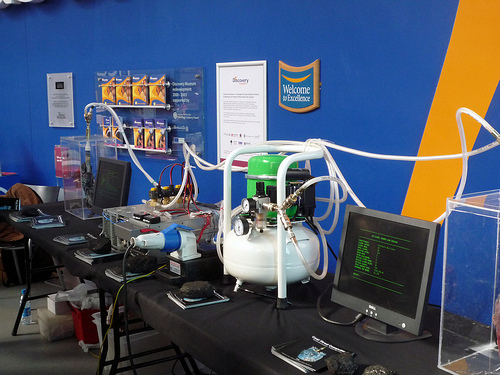 By placing the boiler and computer side-by-side, Coal Fired Computers brings to the fore the “invisible” work force needed to supply the fuel and raw materials necessary for this technology to function, as well as the environmental impact of these energy sources. Laborers from countries like China, Vietnam and India toil in coal mining fields to enable the production of energy to run technology - outsourcing the health and environmental risks of this method to elsewhere.

See below for a video of Graham Harwood discussing Coal Fired Computers:

"while at Rhizome be sure to read about coal-fired computers and feel really bad about yourself. (I seem to recall this was a late '90s canard designed to spur coal production - one lump per megabyte or whatever - but I'm sure the artists have done their homework this time and aren't just passing around bogus industry statistics. Nothing like having a coal stove hooked to a laptop to make your point - subtle!)"

Its startling listening to those statistics!