Dispatches from No Soul For Sale
Ballroom Marfa
By Ceci Moss 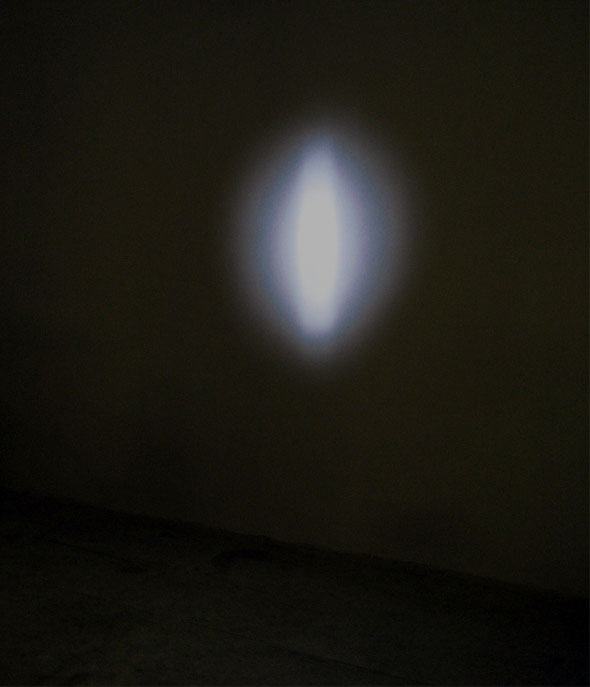 Ballroom Marfa, a contemporary art center based in Marfa, Texas, presented Erika Blumenfeld's Moving Light: Lunation 1011 in their space, pictured above. Last year they showed Kaffe Matthew's Sonic Bed_Marfa, which was really neat. This year they projected Erika Blumenfeld's Moving Light: Lunation 1011, a work she created as a resident at Ballroom Marfa. You can read a bit about the work below, from the press release:

In September and October of 2004, Blumenfeld went to Marfa, Texas as Ballroom Marfa's inaugural artist-in-residence. Through the generosity and non-financial support of the McDonald Observatory, Blumenfeld was granted the rare opportunity to work on site up on the main peak of the observatory in one of their astronomer's houses. During her two-month stay, Blumenfeld created her very first video-based installation, titled Moving Light 1011.

Lunation is the mean time between two successive moons, and the lunation number is calculated from the first new moon that occured in 1923. This piece, titled 1011 after hte actual lunation cycle, documented the waxing and waning of moonlight over a 30-day period, from new moon to new moon.

Recorded through an altered telescope and self-built recording devices, Blumenfeld documented the varying intensities of light radiating from the moon onto handheld photographic film. The resulting images portray not only the changing quantity of moonlight in its nightly phase, but also the artists own hand which, in holding each piece of film over the long two-minute exposures, moved slightly from her own heartbeat and body's subtle sway. The relationship between technology and the human implementing it is expressed in the completed video installation, where each of the exposures taken over the 30 days were animated in sequence to produce a moving account of the lunar cycle.