I visited ITP’s Spring Show on Monday, the open house for NYU’s graduate interactive technology program. Like years past, the kiosk-like presentation of projects makes the event seem a bit like a science fair, with artists and inventors on hand to answer questions. ITP’s student body is quite diverse - ranging from web entrepreneurs to roboticists to performance artists and more - and this aspect usually guarantees that you’ll come across something interesting. See below for some quick notes from this year’s show. 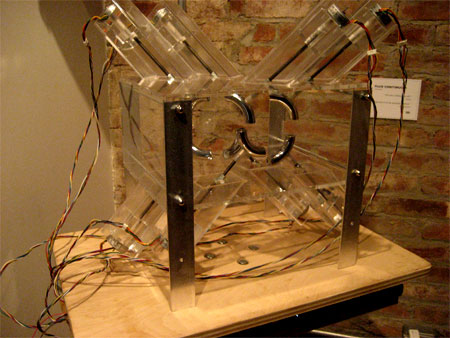 This sculpture assembles itself into a mobius strip according to a series of algorithms, and it responds to the movement and proximity of the viewer. When you stand away from the sculpture, the metal crescents within its interior flutter and twitch. 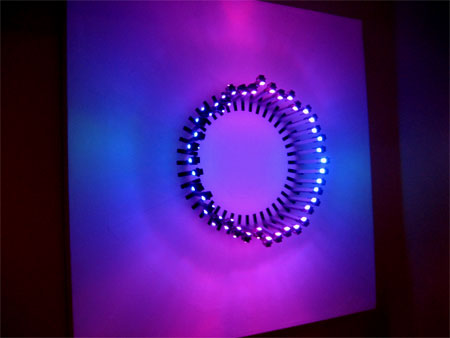 Eighty LEDs light up a large canvas, slowly shifting the color palette into a soft wash. When I first came upon this work, its use of light and color reminded me of James Turrell, an artist Richard cites as an inspiration on the ITP page for Estrella Intersects the Plane.

The above are videos of two sculptures in the "Kinetic Memory Triggers" series -- works which are meant to express certain character traits through movement. The sound, color and design choices for this series of sculptures called to mind a paired-down Carsten Nicolai or Zimoun.

This record player houses a number of components -- a tin can, a singing bowl, etc. -- which are struck or shaken by small motors, creating a clangy, mechanical composition. I generally shy away from the word "whimsical" but this quirky music box definitely had that quality. 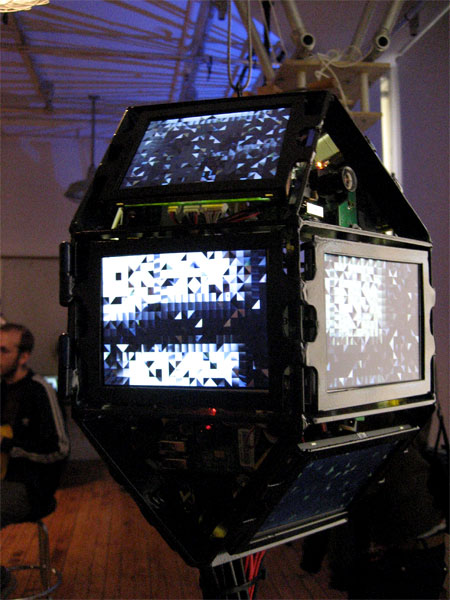 The Diamond Mind by Nicholas Rubin

Suspended from the ceiling, The Diamond Mind draws live video feed from the space surrounding it, which appears on a number of small, bundled together LCD screens as triangular tessellations. Sort of like a miniature version of Jonathan Schipper's Invisible Sphere (215 Points of View).

Layers of origami-like fans obscure a large screen projecting live video, abstracted through Processing, of those standing in front of it. I spoke with the creators behind Papel and it seemed like they intended this to be used in a commercial setting, such as a shop window or a fashion show.