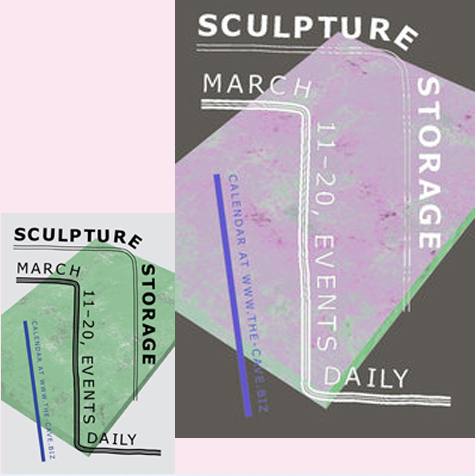 Today and tomorrow are the last two days of art collective The Cave's week-long residency at La Mama gallery space in the East Village. The group has been running an series titled "SCULPTURE STORAGE" in which a small stage hosts a series of performances, screenings, workshops and lectures. Not only do the lectures themselves deal with the issue of storage and the archive, the series itself functions as a performance of the act of storage:

"The platform will start out empty, but will accumulate debris from each event as it takes place. The physical wear on the structure and the rubble left from the nine days will act as a living timeline of the events that took place there. Posters surrounding the stage will both advertise and memorialize the events as they unfold during the exhibition."

Events this evening include a lecture on "The Personal Website" by Travess Smalley of Poster Company and a tour of Kool-Aid Man in Second Life given by artist Jon Rafman. The full schedule can be found online at The Cave.