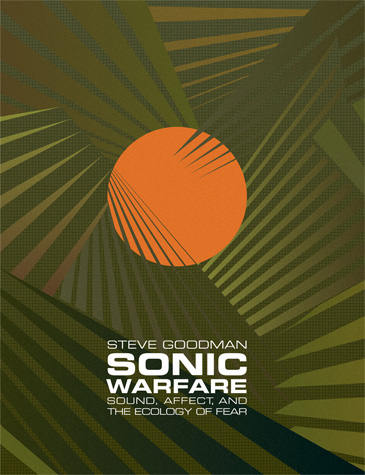 Cover of Sonic Warfare: Sound, Affect, and the Ecology of Fear by Steve Goodman

In Krystof Wodiczko's striking installation Out of Here: The Veterans Project, currently on view at the ICA in Boston, choppers roar overhead. People scream in the distance. Glass breaks and shatters on the floor. The viewer can see almost nothing; the large room is dark, except for a few windows high above, created by a row of video projections. The view from these windows is obscured; the piece is as much about what you can't see than what you do see. But even more importantly, the piece is about what you hear--and what you can't hear. The chants of an imam become the sounds of women wailing. Gunshots begin to fire sporadically. Military officers yell harsh commands. The rumble of bass—a swarm of Humvees in the distance, drawing closer—gets louder and more threatening. The longer you stay in the room, immersed in the increasing racket, the more palpable the sense of dread becomes. The harrowing sounds of war are not simply about the sounds themselves, but the spaces in between.

In the intriguing new book Sonic Warfare: Sound, Affect, and the Ecology of Fear [MIT Press], Steve Goodman explores the power of sound as a tactic of irritation, intimidation, or even permanent harm. Goodman analyzes "environments, or ecologies, in which sound contributes to an immersive atmosphere or ambience of fear and dread--where sound helps produce a bad vibe."

Goodman catalogs a litany of military uses of sound that seem like sinister science fiction fantasies. The "Urban Funk Campaign" was a suite of audio harassment techniques used by the military in Vietnam in the early 1970s. One such technique was called "The Curdler,” or “People Repeller,” a panic-inducing oscillator with the ability to cause deafening impact at short distances. The Windkanone, or "Whirlwind Cannon," was a sonic weapon planned by the Nazis. The “Ghost Army” was a unit of the U.S. Army in World War II that impersonated other units to fake out the enemy, employing an array of sonic deception techniques with the help of engineers from Bell Labs. "The Scream" was an acoustic weapon used by the Israeli military against protesters in 2005. That same year, the Israeli air force deployed deafening sonic booms over the Gaza Strip—producing powerful physiological and psychological effects. "Its victims likened its effect to the wall of air pressure generated by a massive explosion," Goodman writes. "They reported broken windows, ear pain, nosebleeds, anxiety attacks, sleeplessness, hypertension, and being left ‘shaking inside.’ "

The physiological effects of sound get an extended discussion via the concept of infrasound, or sub-20 Hz bass frequencies, which are legendary for inducing bodily harm. Fantastical tales about infrasound and its infamous effects on the human body abound in popular lore. Infrasound devices generally require huge, heavy rigs to produce such powerful waves, which limit their practicality. One of the book's most fascinating accounts is the story of the wily scientist Vladimir Gavreau, who did bizarre experiments with infrasonic waves in his French laboratory in the 1960s. According to Goodman, one such experiment caught Gavreau and his team in a “vibratory “envelope of death,” where they “allegedly suffered sustained internal spasms as their organs hit critical resonance frequencies.” Goodman seizes upon these outer limits of sound - infrasound at the low end, and ultrasound at the high end - and explores them extensively. For him, infrasound and ultrasound, at the edges of our range of perception - illustrate the “unsound,” as he terms it, the “not yet audible.”

Freakish military devices like "The Curdler" may seem like footnotes of the historical record--curiosities from wars staged in far-flung lands. But these devices also hit close to home. Last September, police in Pittsburgh utilized a device known as the LRAD (Long Range Acoustic Device) cannon against G20 protesters -- the first documented use of one of these acoustic cannons against civilians in the United States. At top volume, the cannon is capable of emitting high-pitched warning tones at 146 decibels -- loud enough to cause permanent hearing damage.

Video: Use of the Long Range Acoustic Device at the G20 Summit Protests in Pittsburgh, September 2009
(Source: Sonic Warfare blog)

How do we make sense of these uses of sound? Goodman sidesteps a full-on historical survey of the subject. Nor is he interested in a scientific analysis of the neurobiology of audition. Instead, he presents a theoretical apparatus for understanding these acts of sonic warfare, via thinkers such as Friedrich Kittler, Paul Virilio, and Jacques Attali. Goodman argues for an “ontology of vibrational force,” as a way of understanding “the not yet audible.” Goodman defines vibrational force as a “microrhythmic oscillation,” and uses the idea of “rhythmanalysis”--a philosophy of rhythm developed by the philosophers Pinheros dos Santos, Gaston Bachelard, and Henri Lefebvre—to advance his argument.

Along the way, Goodman delves into a bewildering array of references from the worlds of philosophy, psychoacoustics, art, music, and military strategy. The Futurists' fixation with noise, war, and speed figures in here, from Luigi Russolo's famed tract “The Art of Noises” to Marinetti's fevered exultations: “Load! Fire! What a joy to hear to smell completely taratatata of the machine guns screaming a breathlessness under the stings.” So, too, do the discourses of Afrofuturism, the surreal fictional landscapes of William S. Burroughs and J.G. Ballard, the 1984 cult film Decoder, “audio viruses,” Deleuze and Guattari's theory of the refrain, Jamaican sound systems, the work of the sound artist Mark Bain, and the “Mosquito Anti-Social Device,” a high-frequency tool designed to prevent UK teenagers from loitering.

Sonic Warfare is a heady, sprawling read, densely packed with detail. Goodman's wide range is, in part, influenced by his background. In addition to being a writer and theorist, he doubles as an accomplished producer of dubstep under the alias kode9, wandering a subterranean world of bone-rattling bass pressure, towering speaker stacks, and crowded rooms. His unique dual existence makes him strangely - and ideally - suited for a book which requires not only an understanding of theory and history, but also a close and personal understanding of the powerful physicality of sound itself.

i created a sound walk project by the same name, sonicWarfare, in 2006, exploring similar motifs addressed in Goodman's new book. you can listen to a short excerpt here: http://www.heidiboisvert.com/sound/.