From the Mixed-Up Files of Mr. Danny Snelson
By Brian Droitcour 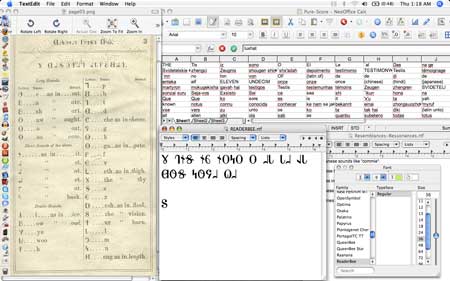 Google's mission "to organize the world's information and make it universally accessible and useful" centers around faith in the power of the keyword to unlock its bottomless treasure chest and put the right answer in one window. Years have passed since the company's ranking algorithm outpaced the approach of human navigators filing information into channels -- an approach that Yahoo has been trying to keep alive by farming the digital labor to users themselves. But even as search algorithms make dinosaurs of the Dewey decimal and other brain-powered systems, it might be worth considering the benefits of staying open to a plurality of variously scaled methods.

These issues converge in Danny Snelson's work as a writer, editor, and archivist. His titles increasingly overlap in the internet's library without walls--an environment that often embodies the Foucauldian idea that "one never archives without editorial frames and 'writerly' narratives (or designs)," as Snelson put it in an email. As an archivist, he has made substantial efforts to preserve endangered cultural artifacts -- making them universally accessible and useful, you might say -- on behalf of PennSound, an audio archive specializing in recorded poetry, and UbuWeb, where, at the suggestion of founder Kenneth Goldsmith, he scanned out-of-print titles and reformatted them as PDFs for free distribution via the site's /ubu channel. The PennSounds and UbuWebs of the internet undertake preservation projects that small presses and recording labels can't touch due to financial reasons, thus ensuring that experimental work will continue to reach audiences in years to come. Distribution networks like these matter in an environment where the internet (for those without access to academic libraries, at least) is often the first and last stop for research -- a realization that impelled Goldsmith to formulate a radical ontology in the title of his 2005 essay, "If it doesn't exist on the internet, it doesn't exist."

Endless Nameless for sale at Dispatch

The copyright struggles of the last decade give archivists of Snelson's generation reason to be wary of the legal and political ramifications of distributed networks -- perhaps more so than people like Goldsmith, who first encountered the internet in its early, utopian days with fully formed ideas about the limits of print publishing. This, in part, is why Snelson balances his expansion of searchable online catalogues with the creation of hermetic archives. One of these is a site devoted to digitizing Marshall McLuhan's legacy; the link to it is passed hand-to-hand, and the site is coded with a robots.txt file blocking search engines and the unfavorable copyright attention they might bring. Then there is Endless Nameless, a collaboration with James Hoff under the brand of No Input Books. Hoff and Snelson fill hard drives with downloaded avant-garde content and sell them, iTunes-like, for $0.99 per GB. Materials are sorted in folders with the names of the publishers, labels, and galleries that first brought them to the public--a decision intended, Snelson writes, to preserve "the material production history that often gets lost in digital distribution." The list of folder titles ranges from Ace Books to Zone Books (along with a few dozen numerical titles), adding up to approximately four terabytes, a number that, in Snelson's estimation, exceeds the data hosted on UbuWeb. For each Endless Nameless customer, the folders are selected randomly to fit the desired amount of memory. The hard drive's discrete physical form makes it easy to keep it off the grid.

Online, writing and archiving often commingle because anything posted to the web is indexed shortly thereafter. Self-publishing services like Blogspot offer tagging systems to encourage users to streamline that process. But any one user's classification system can include tags as wild as the "embalmed ones" and "mermaids" of the animal taxonomy in Borges' notorious Celestial Emporium of Benevolent Knowledge. Idiosyncratic tagging systems are metalanguages that yield little, if any, information about their presumed subjects, instead deflecting attention to the conventions of standard, supposedly transparent classification. J. Henry Chunko, Snelson's dormant blog, reformats Blogspot's default tag cloud as a vertical list cascading down the page's left edge, where each keyword is marked with a parenthetical (1) that conveys a scattered heterogeneity of ideas and topics rather than insights into the site's content through a weighted display of relevance. 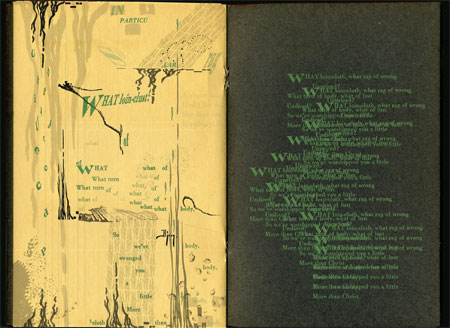 Danny Snelson and Phoebe Springstubb, The Book of Ravelling Women

Another of Snelson's adventures in Blogspot is my dear coUntess, which reconstructs a letter to Lord Kelvin, the British physicist, by replacing each word with a counterpart from any of a dozen arbitrarily chosen texts by authors including Gertrude Stein and Jack Smith. The origins of the replacement words are marked by color and a hyperlink that opens the full source text in a new window. Words from the original letter and those of Snelson's appended texts are paired by difference as often as similarity -- a linguistic game that readers can follow by shifting their gaze between the old and new letters (the original is left on the page, like in a bilingual edition). The pace of reading is quickened by the accompanying video of Snelson's Sprechstimme performance of his version; he intones each word at a color-coded pitch while dressed in a costume assembled from found materials of the corresponding color. Couched in Snelson's labyrinthine hack of Blogspot presets, the protracted clashes of nineteenth-century science and twentieth-century literature, of synaesthesia and logocentrism, enact the schizophrenia of search-engine intertextuality based on little more than lexical units.

Last week, Snelson brought his work to the Centre Pompidou, in a presentation with James Hoff, his partner at No Input Books, and the artist Vito Acconci. Hoff came to know Acconci while editing Ugly Duckling Press's reprint of 0 to 9, the mimeographed magazine of conceptual writing that Acconci and Bernadette Mayer produced and distributed from 1967 to 1969. Invited by Italian poet and sound artist Alessandro de Francesco, the three attempted to marry experiences of peer-to-peer file sharing and live conversation. Each video clip, image, and text included in the dense presentation was introduced with anecdotes from personal and cultural history. The structure of the event was designed to resonate with its participants' search for alternative forms of digital archives--ones that preserve intimacy, introspection, and atmosphere along with information.