Performance, All Over the Map: On Chris Salter's "Entangled"
By Maria Chatzichristodoulou [aka Maria X] 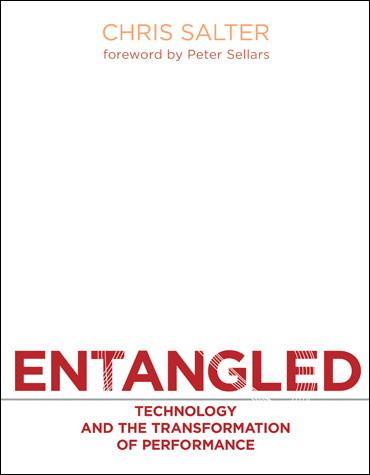 Chris Salter's Entangled: Technology and the Transformation of Performance (MIT Press, March 2010) is a massive undertaking and a book long overdue. In this ambitious project, Salter sets out to provide a historical overview of the intersections between technology and artistic performance in order to demonstrate the profound entanglement in the historical trajectories of both sets of practices and developments. Entangled seeks to address how technological developments have altered our making and perception of artistic performance and the socio-political, cultural and economic contexts of such developments (p. xiii). Furthermore, Salter understands the histories of new media arts, theater, and other stage-based artforms as divided in a tension between the technophilic and technophobic, and his investigation is an attempt to fill this gap.

Peter Sellars describes, in his Foreword to the book, Salter's approach as radically inclusive. Indeed, Salter sets out to frame an impressively diverse range of practices as performance. Those practices include, but are not limited to, theatre, opera, scenography, architecture, video art, installations, environments, sonic arts, robotics, media arts, live and body art, expressions of popular culture such as music gigs, and more. Entangled consists of eight chapters, each focusing on a different form. This distinction is not designed to separate disciplinary trajectories though; instead, it challenges disciplinary boundaries through its fluid narrative that consistently foregrounds intersections, crossovers and common histories.

Through the framing of an expanded and diverse range of practices as performative, Salter seeks to shift our understanding of what constitutes performance practice today. Indeed, in the first paragraph of his introduction, Salter goes on to claim that “everything has become performative” (p. xxi). And it is, I think, this proposition that is one of this book's most important contributions to contemporary thinking and praxis. Salter points at a shift in the zeitgeist that occurred at the end of the 20th and the beginning of the 21st century, when the euphoria of the virtual was replaced with a reconsideration and re-foregrounding of the physical body and, with it, “embodiment, situatedness, presence, and materiality.” (ibid) As a result, claims Salter, “performance as practice, method, and worldview is becoming one of the major paradigms of the twenty-first century, not only in the arts but also the sciences.” (ibid) Following the work of Francisco Varela, as well as Jerome Butler, Eleanor Rosch, and Evan Thompson, Salter explains that what performance suggests as a worldview is that 'reality' is not pregiven (and thus cannot be represented), but rather “the world is enacted or actively performed anew.” (p. xxvi) Thus, approaching the world as 'performative', is approaching the world as a 'reality' that “emerges over time” and is “continually transformed through our history of interactions with it.” (p. xxvii)

In the main body of this work, Salter provides a wide and comprehensive survey of artistic practices starting from the end of the 19th and moving to the 21st century. Salter's narrative opens with Wagner's Gesamtkunstwerk (total artwork) and the opening of his Festspielhaus in Bayreuth, Germany in 1876; it closes with British group Blast Theory's pervasive games that seek to transform urban environments into augmented stages for performances that engage their audiences as “active shapers” (p. 348) of both the piece and their own experience. Salter narrates the story of artistic evolution across artforms in parallel with another story: that of technological developments from the mechanical to the computational; from photography to artificial life and biotechnologies. The account demonstrates throughout how those technological developments affected, informed, facilitated or initiated artistic practices. Occasionally -but not enough, I think- a third narrative comes into play, contextualizing both artistic and technological developments within their socioeconomic and cultural strata.

Entangled is a vast undertaking not only due to the impressive range of practices and practitioners that Salter refers to and sets in relation to each other, but also because of what Sellars calls its “democratic” approach (p. xi). Salter's attempt to present history not in a selective manner, focusing on what one might consider as art historical milestones, but in a mapping of practices, movements, processes, developments, makers and thinkers that co-exist across times and disciplines, makes this book remarkable in that it allows for the whole image to emerge. This inclusivity brings forth patterns, connections and confluences that would not have been visible in a more canonical art historical account. Unfortunately, this very democratic approach makes Entangled appear, on occasions, as an indexing (or name dropping) exercise. Salter's noble attempt to remember and refer to a vast number of those who contributed to relevant developments means that he cannot elaborate ¬on specific practices or people -the book covers practices widely but not in depth. To quote Sellars, Entangled “exemplifies our age,” it is “exhausting but not exhaustive,” it provides “much too much information and much too little.” Moreover, as Sellars also points out, “Asia, Africa, Latin America, and Australia are still underrepresented” (p. ix). It is true that Salter's account, though inclusive and democratic is, yet again, a Westernized one. However, such shortcomings are to be expected given the restrictions imposed both by the very scale of Salter's undertaking and the format of the book: having collected a great number of artists and artforms in order to map out trajectories, pinpoint links, and demonstrate intersections, any attempt to delve into greater depths, or expand the scope of this survey to equally record a more international range of practices and artists, would had been an impossible task.

There is no question about the value of Salter's ambitious endeavor, which is consistent with his aim in fulfilling a gap in how the historical accounts of artistic practices have been written. Through his radical inclusivity, Salter not only proposes to rewrite the history of performance in a way that challenges our understanding of what performance is, but also demonstrates the profound connections between diverse sets of interdisciplinary practices that have not, up to now, been approached, considered or articulated as either interconnected or performative. Salter's daring proposition thus (re)positions performance as central within contemporary culture as well as our approach to and understanding of the world we live in. I have no doubt that Entangled will serve as an invaluable reference for students, researchers and artists, and will inform future praxis through an improved understanding of the rather 'messy' entanglements in the developments of various practices that cannot be perceived, studied or furthered in isolation.

Dr. Maria Chatzichristodoulou [aka Maria X] is a cultural practitioner (curator, performer, producer, writer) and Lecturer in Theatre and Performance at the School of Arts and New Media, University of Hull, UK. She holds a PhD in Art and Computational Technologies from Goldsmiths Digital Studios, University of London. Maria X was co-founder and co-director of the international Medi@terra art and technology festival (Athens, Greece) from 1996 till 2002, as well as initiator and co-director of the festival Intimacy: Across Digital and Visceral Performance (London, 2007). She is a member of the Thursday Club (Goldsmiths), co-editor of the collection Interfaces of Performance (London: Ashgate, 2009) and the forthcoming collection Intimacy. She has presented her work in numerous international conferences and has published widely.

Salters from the description seems to agree with Heraclitus that the sun is" born anew each day" and what intrigues me in the description of his interest in a democratic history is how the topologies of histories and their embeddings upon each other are like the new concept we have of geography in which satelite views in their variety create a different sense of map lines which are seen as simplified and considered differently or represented simpler.
If reality is not a given and cannot be represented but only enacted to experience the word reality needs a second look I suppose- it would appear to be a combination of the prefix re and and the word "alite" as in to land again upon. The world performance corresponds in my view with a world that is very much about publishing as much as it is about performing… those performances get published and that publishing is a reification so I hesitate to propose replacing the word reality….