Mark Your Calendars for September 24th
"The Art of Blandman: An Evening with Michael Smith" at the New Museum
By Rhizome 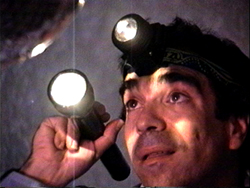 This is a reminder to join us next Thursday September 24th for a discussion with Michael Smith at the New Museum. Not to be missed! Full details and ticket information below.

Throughout his career, Michael Smith’s original approach to video, installation, and performance has broken artistic ground—albeit subtly. Steering away from the transgressive actions associated with avant-garde performance, Smith employs the idioms of popular entertainment and comedy to critique culture at large. His eponymous alter ego Mike, who is known for pathologically banal behavior, sends up cultural normalcy and spotlights the ways people consume ideas and lifestyles marketed to them. For this event, New Museum Adjunct Curator and Rhizome Executive Director Lauren Cornell will talk with Smith about his use of comedy, both as a way to engage and quantify audience response and to generate new work. Their conversation will cut through Smith's expansive body of work by focusing on pieces that have been exhibited at the New Museum, including Down in Rec Room, shown in “Not just for Laughs: The Art of Subversion” in 1981; Government Approved Home Fallout Shelter Snackbar (made in collaboration with Alan Herman), shown in “The End of The World” in 1983; and Open House, a site-specific installation by Smith and Joshua White created for the New Museum in 1999.

The Art of Blandman: An Evening with Michael Smith
Thursday, September 24, 2009 at 7pm
at the New Museum
$8 General/ $6 Members
BUY TICKETS HERE

The event is part of Rhizome's New Silent Series.