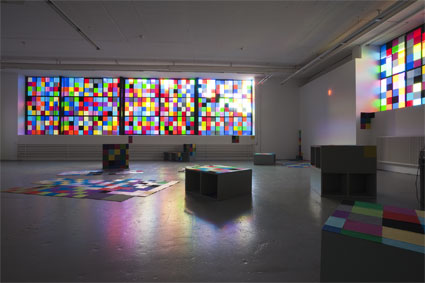 The following essay was first published in the catalog for the exhibition curated by Raphael Gygax "Deterioration, They Said" which is on view at the migros museum für gegenwartskunst in Zurich, Switzerland until November 8, 2009.

1. The popular dissemination of magical worlds has ultimately shifted from folk tales to children’s television. Paper Rad takes back this process from commercial channels, creating their own ever-shifting cosmos populated by robots, spaceships, monsters, talking animals, giants and wizards.

Like H. P. Lovecraft or J.R.R. Tolkein, Paper Rad created their own mythos, a set of characters that jointly share a fantasy world. Like Warner Brothers or Disney, Paper Rad circulate their creations across media—websites, comics, animated videos, sculptures, screen prints—thereby establishing themselves as the creators of both an imaginary alternative universe and an audio-visual brand.

2. Some of the recurring personages from the Paper Rad multiverse:

Alfe: His name is pronounced “alf-ay” not “alf.” He is tall, gruff and usually brown, with a long cucumber-shaped nose, double-lidded eyes and a broad, neckless head bearing two hump-like protuberances. Reminiscent of the red-haired monster found in Bugs Bunny cartoons, sometimes named “Gossamer.” Often found with Roba, a human-insectoid whose streamlined design recalls robots from Japanese TV anime, and Horus (a.k.a. Horace), a pop-eyed humanoid. In the DVD Trash Talking, Horus fears that global thermonuclear war has begun, due to the fact that he and his roommates Alfe and Roba have not left the house in several days.

The Narrator: A squat, sarcastic character who resembles a blue cloud with stubby limbs, yellow snout and fat black eyebrows (or are they eyes?). In the video P-Unit Mixtape 2005, he sits in the back of a limo, administering absurd put-downs to other artists.

Nameless pig-lady hybrids, often dancing, loosely based on the Muppets’ Miss Piggy. In Jessica Ciocci’s 2007 cartoon book Pig Tales (published in a flip-over compilation with Paper Rad’s Cartoon Workshop), one such porcine dame crafts a hair-do by spinning a beehive from cotton candy.

Tux Dog, a dapper canine based on a drawing first made by Ben Jones at the age of ten, inspired by his father’s “love of Beckmann's self portrait mixed with the child's own artistic influences at the time, Bill the Cat and Garfield,” according to Paper Rad’s currently offline website tuxdog.org. Launched in 2004, the site promoted Tux Dog as a copyright-free, open source character, available for use by anyone.

3. Other characters in Paper Rad’s works are pilfered from mass media, copyright be damned: Gumby, Garfield the Cat, Bart Simpson, Mario, the brush-haired Troll dolls. Along with their own creations mentioned above, any of these creatures can appear as protagonists in narrative sequences, or as decorative elements in elaborate tableaux.

Jacob Ciocci: “Corporate companies make this garbage and then send it out into the world, and then culture makes sense of it and uses it productively.” 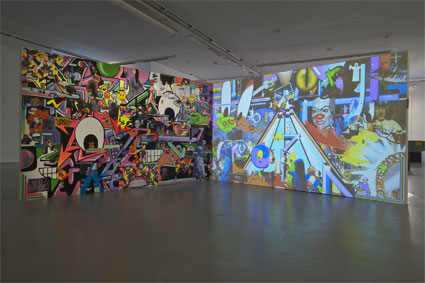 4. Cartooning refutes the false dichotomy between representation and abstraction in art. To paraphrase Werner Heisenberg (“Abstraction in Modern Science,” 1960), abstraction means the singling out of a limited number of features of an object while disregarding all other properties. Thus Paper Rad’s Tux Dog consists of a combination of just a few circles and curved lines—an abstracted if vernacular form, evoking children’s drawing, primitive symbols and approaching hieroglyphics. Consequently, these constituent elements may then be reconfigured into impossible shapes that can only be found in the realm of fantasy.

5. In 2003 the New York Times critic Holland Cotter employed the term “collectives”—more commonly associated with the art of the 1960s—to describe recent ensembles of American artists who “identified by a group name, like rock bands,” whose art “is often a multitasking mix of painting, sculpture, printmaking, design, digital art, video, zine production and musical performances.” Cotter cited Paper Rad as part of this new generation of collectives, along with Forcefield, Radical Software Group and others, arguing that “what they do, or rather the way they do it, outside the centralized, market-determining power structures of the mainstream art world, could turn out to have political consequences for the way art develops.”

Jones, however, later stated “I don’t know anything about 60’s art collectives. What we’re doing is just common sense.” Paper Rad’s DIY ethos favors creative systems that are relatively low-cost, auto-sustaining and non-corporate. Overseeing your own alternative economic and distributive practices is a way of creating a parallel art world, based on and interwoven with existing structures for bands, music labels and small publications.

Extreme Animals: Noise-techno-pop band consisting of Jacob Ciocci and David Wightman. Music by Extreme Animals appears on the tape PjVidz #1. Their frenetic, spasmodic live performances include nods to the day-glo aesthetics and high-speed beats per minute of rave.

Doo Man Group: Permutation of Paper Rad in which the three members perform with cardboard instruments. Related to Jones’s live percussion outfit Dr. Doo and the enigmatic character of the same name, who appears in the cartoon book Paper Rad, BJ and Da Dogs and elsewhere as an uncanny smiley face drawn on a monitor screen.

7. One of the main attributes writers have employed when describing Paper Rad’s work, “Fun” is an important but complicated concept for Americans: we consider fun essential to every individual’s well-being, yet denounce it as frivolous when found in “higher” creative forms like art, literature and music. The simultaneous complexity and exuberance of Paper Rad’s work sharply counters this unnatural division.

8. Layering is a frequent graphic strategy for Paper Rad: intermeshing multiple levels of Flash cartoons, animated gifs, and VHS footage on top of one another, flattening their various depths into impossible dimensions of optical-illusion collage, risking total overstimulation. This strategy parallels the practice of historical layering that occurs in their work, in which fictional characters from various decades appear in the same space (Gumby meets Bart Simpson), and vernacular styles from different stages of life cohere—toddlers’ scribblings, children’s art, school-kids’ hand-written notes, stoner doodles—all these moments bleeding into one.

Jessica Ciocci: “I feel like it is the same kind of energy as when you are a kid and drawing. It’s just about sharing something awesome with people.”

9. A copy of PjVidz #1: Color Vision that I purchased at an Extreme Animals show in 2003 is a VHS tape, wrapped in a laser-printed paper sleeve, with no title on the tape itself. Rather, it’s a generic black tape with the words “—Sprite Commerical / --Barq’s Got Bite” hand-written in bubbly letters with a pink Sharpie. It’s meant to masquerade as just another tape of random TV snippets that you might find lying next to your VCR. It takes the mixtape as its form, stringing together early Flash animations, music videos for Extreme Animals and clips of weird television: a coherent chaos.

Trash Talking, a 2006 DVD released by Load Records, begins with a ridiculously long sequence with The Narrator, who trundles through a graffiti-strewn neighborhood to a midi version of the Bee Gee’s song “Jive Talkin,” then gives a long talk about CD-ROM technology, before allowing the viewer to access the menu.

Problem Solvers, a DVD released in 2008, takes the form of an episodic animated TV show for kids—“like how we remember from our childhood,” as its opening titles state.

11. Reminiscent of Op Art and psychedelia, the use of repeating patterns and strobing colors attests to the group’s desire to create visual forms with the same visceral rhythms as music. Jessica Ciocci’s solo work includes a series of “grid drawings” that create reticulated patterns of color, as if obsessively executed on graph paper, that connect to similar reverberating structures found elsewhere in Paper Rad’s work.

In her essay “Grids,” published in the journal October in 1979, art historian Rosalind Krauss identifies the grid as “an emblem of modernity…the form that is ubiquitous in the art of our century, while appearing nowhere, nowhere at all, in the art of the last one.” She writes that “the relationships in the aesthetic field are shown by the grid to be in a world apart and, with respect to natural objects, to be both prior and final. The grid declares the space of art to be at once autonomous and autotelic.” In short, “the grid functions to declare the modernity of modern art.”

If the modernist grid, as seen in the paintings of Mondrian or Agnes Martin, provides a marker of art’s release from representation and, thereby, the mind’s triumph over nature, then Ciocci’s 21st century hand-made color grids express something else—a living grid, perhaps: a formal system that, while based on a cool mathematical geometry, pulses with an individual spark, vibrates with prismatic life. 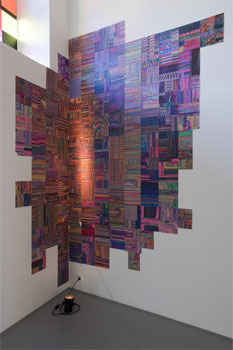