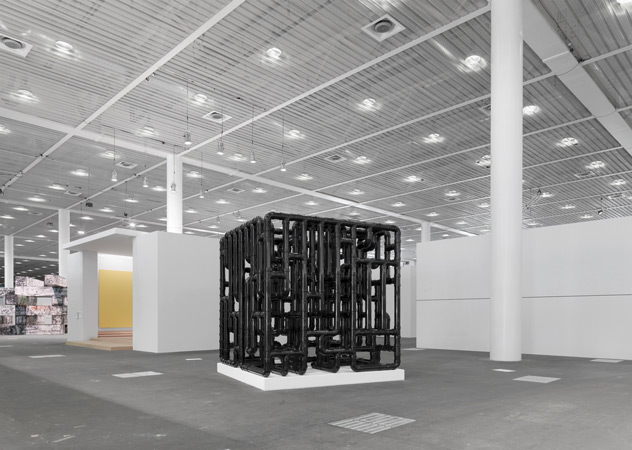 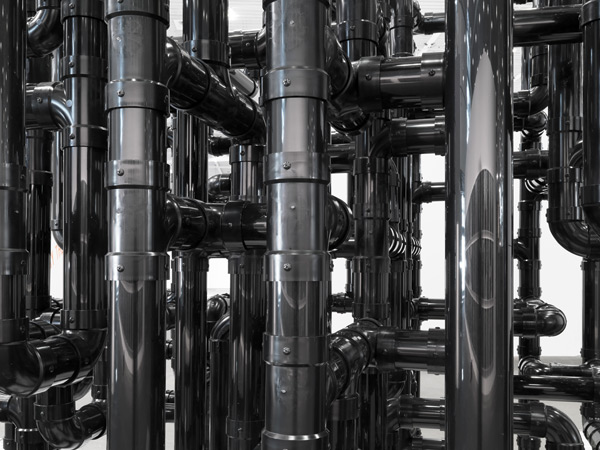 The new sculpture I'm making is...based on an old picture of a jungle gym that was constructed out of four-inch PVC sewer pipe. I liked the idea that this utopian object was constructed out of plumbing material and maybe it is now the plumber taking on the role of the social-engineer-- this is his meditation on how to create equilibrium and harmony amongst young people! I first constructed a small-scale model out of half inch copper plumbing pipe that followed the design from as much as I could see in the photograph, and then I extrapolated the rest of the design. The preliminary model sort of took on its own life. We polished it up and there was something jewel-like about it and also something crazy about its endless maze of plumbing fittings. I thought about plating the model after it was done too, but I liked the idea that it was totally Home Depot, just copper plumbing pipe and Brasso. The full-sized PVC version will be about nine square feet, and it will have a sound component to it that will generate subtle vibrations and tones that I plan to make with a bass guitar, kind of like chimes trying to summon people. Speakers along with tactile transducers will be housed within it to create an illusion that the tones become louder when you touch the sculpture. I like the idea of a sculpture that tries to turn people's bodies into instruments.

-- EXCERPT FROM AN INTERVIEW WITH THE ARTIST PUBLISHED IN THE CATALOG FOR "DOUBLE ALBUM: DANIEL GUZMAN AND STEVEN SHEARER"

reminds me of the "3D Pipes" screensaver.