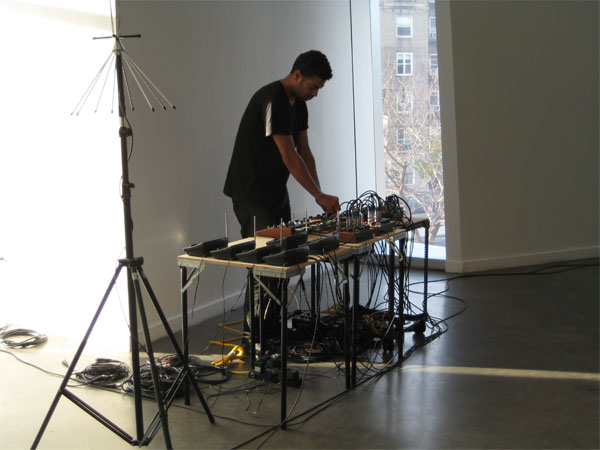 On November 15, an unseasonably warm fall Sunday, a small crowd of artists and academics armed with pens, notebooks, and cell phone cameras, gathered on the second floor of the Bronx Museum. The afternoon began with a panel discussion on the topic of radio and Futurism followed by a sound installation presented by the artist Kabir Carter as part of Performa 09. As Sergio Bessa, Director of Programs, pointed out-- perhaps facetiously-- Futurism and the Bronx are temporally linked: Marinetti's Futurist Manifesto and the Grand Concourse are both celebrating their centennial this year.

The panel, featuring literary critics Marjorie Perloff and Richard Sieburth, and poet Charles Bernstein, served as a precursor to Carter's Trap [originally titled Drifts and Traps], locating the sound piece within the historical context of the Futurist movement. The live presentation also served as a more complex complement to Carter's current installation at the BMA.

The panel centered on the opposition of the Russian futurists, portrayed as optimistic idealists by Perloff, and the Italian futurists, a group of dystopian thinkers enamored of fascism presented by Sieburth. Perloff began by reading Velimir Khlebnikov's Radio of the Future, an essay predicting the potential of radio to act as a vast concert hall and to disseminate news to the masses. Sieburth, on the other hand, explored Ezra Pound's role in Italian Futurism, focusing on Canto LXXII, a poem of discordant strife describing the author's fictitious meeting with Marinetti in radio hell. Transitioning neatly to Carter's installation, Bernstein then performed a dramatic reading of sections of Marinetti's manifesto, as well as poems by Russian Futurists and the speaker himself.

After a short break, Carter positioned himself at a table with an array of devices: radio scanners, analog synthesizer modules and audio mixers. Sounds subtly began to emanate from speakers located around the room, and the din of the audience ebbed as it became aurally engulfed by the powerful installation. 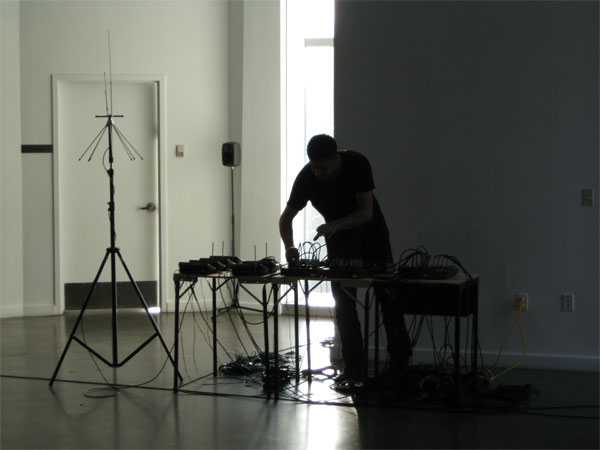 Muffled voices, sirens in the distance, fuzzy static and high-pitched beeps came together in a tangled whir, as Carter, poised like a DJ, concentrated on turning knobs and switching wires. Picked up by radio scanners, the source material derived from transmissions generated by police, car services, the MTA, and other radio users in the South Bronx. For the first time in his career, the artist chose to work with signal delays in order to "accurately represent the continuous lateral drift of acoustic energy and events along the Grand Concourse," in his own words.

After a few minutes, the composition reached a powerful crescendo, and as the late day sunbeams shone through a window onto the artist, a phrase from Radio of the Future, "a silver shower of sounds," described the moment perfectly. The intensification ended abruptly, and a lull drew attention to the silence in the room.

As time passed, the sounds became more legible and systems became identifiable-- the presentation had a fairly long duration for precisely this reason. While the radio signals may at first have appeared to be a chaotic jumble of noises, over time patterns began to emerge, and Trap became a fluid movement. As Sieburth reminded the audience earlier in the afternoon, Marinetti once declared that a speeding automobile is more beautiful than the Victory of Samothrace, and for a few hours in the Bronx, the legacy of Futurism lived on in the cacophonous beauty of Trap.

Jeanne Gerrity is a Brooklyn-based curator and writer. She currently holds the position of Programs Manager at Smack Mellon.

YEs! aRT/music/cultures/cuisine/ufo,s/EBE,s The gov,ts the banks etc. I was Born in the Bronx (1956)…..It would be like a salmon going from the ocean back to the orignal fresh water stream where it was hatched. PLEASE contact me I,m all over the internet just google search (babylon john john mcardle RHIZOME) ART MUSIC ART MUSIC ART MUSIC