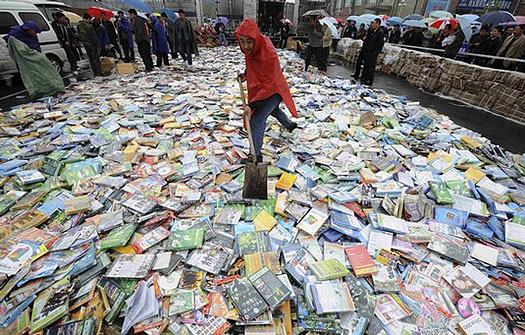 The poor image is a copy in motion. Its quality is bad, its resolution substandard. As it accelerates, it deteriorates. It is a ghost of an image, a preview, a thumbnail, an errant idea, an itinerant image distributed for free, squeezed through slow digital connections, compressed, reproduced, ripped, remixed, as well as copied and pasted into other channels of distribution.

The poor image is a rag or a rip; an AVI or a JPEG, a lumpen proletarian in the class society of appearances, ranked and valued according to its resolution. The poor image has been uploaded, downloaded, shared, reformatted, and reedited. It transforms quality into accessibility, exhibition value into cult value, films into clips, contemplation into distraction. The image is liberated from the vaults of cinemas and archives and thrust into digital uncertainty, at the expense of its own substance. The poor image tends towards abstraction: it is a visual idea in its very becoming.....

......The circulation of poor images creates a circuit, which fulfills the original ambitions of militant and (some) essayistic and experimental cinema—to create an alternative economy of images, an imperfect cinema existing inside as well as beyond and under commercial media streams. In the age of file-sharing, even marginalized content circulates again and reconnects dispersed worldwide audiences.

-- EXCERPTS FROM "IN DEFENSE OF THE POOR IMAGE" BY HITO STEYERL IN E-FLUX JOURNAL #10, NOVEMBER 2009