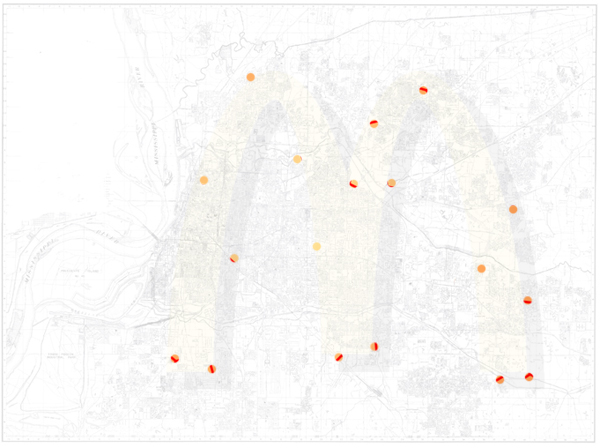 Flying down the back roads and divided four lane highways that cross the southern part of the United States has given me pause over the years to think about the rapidly shifting landscape. Granted being born in the mid 1980’s was like being dropped into the rushing river to maddeningly fast growth and development. When the first Best Buy came to my town it was like dreamland opened its gates right up, with the Sunday circular fueling my insatiable desire to get that fresh video game, or the hot discounted DVD player. As the time passed though, and I began to take these road trips with friends across the south, I realized what was eating me. The disappearing sense of regional diversity, passing through Dothan, Troy, Ozark, Alabama each town had become defined by its strip, the reconfiguring of Main Street, into a bypass road lined with the shiny, glowing colors of economic growth and progress.

Each constellation is a set of points on a laser etched map that correspond to photographed franchises of the projected logo. The first in the group is of Eighteen McDonald’s that spread across the beautiful city of Memphis, Tennessee.

-- FROM THE PROJECT STATEMENT FOR THE SERIES