Any set has begin and end, but the Lucky Dragons played that down in a New York appearance last Saturday; they switched on some recorded sounds as the audience was taking seats, and demonstrated their equipment and chatted after the music’s long, slow fadeout. The structure suits the group’s hippie philosophy that doesn’t assign prominence to any musical moments, but treats all sounds (and people) equally. They also tried to erase borders between performer and audience by encouraging listeners to be mobile, approach the instruments, and improvise, although the narrow length of The Stone, crammed with folding chairs, made it tough for anyone past the two front rows to join in. Lucky Dragons stalwarts Luke Fishbeck and Sarah Andersen were joined by drummer Ches Smith and guitarist Grey Gersten, the curator of The Stone’s program this month.

Once everyone was settled in place, Smith and Gersten entered lightly, playing inside the framework of the electronic pulse already hovering in the venue. Gersten struck and dampened his instrument’s strings percussively, rather than playing melodies. Over time the drums and guitar settled into a hazy backdrop for electronic, pentatonic glissandos emanating from Fishbeck and Andersen’s hacked instruments. Later on they handed audience members a short-circuited wire—wrapped in a colorful knit cozy for safety—that played triadic chords when touched, varying volume according to intensity of squeezes and the amount of grounding (Fader recorded a demonstration of it). The accidental harmonies of that cord, like most of the sonorities in the Lucky Dragons’ music, seems to skip across the overtone series, as if the electronic tool is just picking up the natural vibrations hanging in the air. It could be the signature instrument in their wired drum circle. 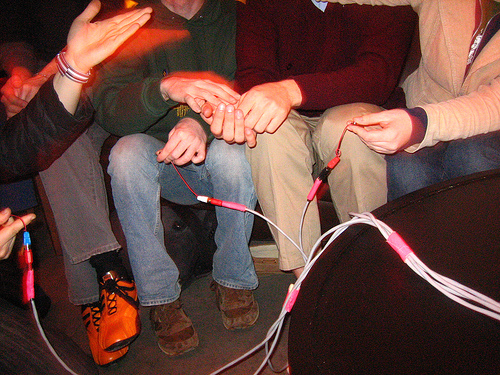