Long a destination for filmmakers to showcase their work, the International Short Film Festival Oberhausen has expanded its program in recent years to incorporate experimental film and video art. Beginning in 2006 distributors, such as Lux, Electronic Arts Intermix, Netherlands Media Art Institute, and the Canadian Filmmakers Distribution Center, were invited to spotlight works recently added to their catalogs. This portion of the festival was rounded out by “Unreal Asia”, a themed series of screenings of Southeast Asian film and video art, as well as a profiles on Japanese experimental filmmaker Matsumoto Toshio, Mexican filmmaker Nicolás Echevarría, German filmmaker Herbert Fritsch, the Sarajevo Documentary School and a retrospective on the Russian art group the Factory of Found Clothes. Annual segments, such as the MuVi award for music videos, an international competition, a competition including only German work, and films made by children, were scheduled alongside the thematic programs, resulting in a diverse and active six-day calendar. I had the opportunity to attend the festival for the first time a week ago, and caught a number of the screenings.

Even if one were a diehard short film aficionado, taking in everything would have been an impossible task. I tried my best to see many of the distributor showcases. The Helsinki-based media art center AV-arkki put together a lively program by works from primarily Finnish artists. Hand-painted onto 35mm film, the techniques used in Miia Rinne’s Pori-Helsinki recalled those honed by legendary avant-garde filmmaker Stan Brakhage. Sixteen minutes long, the film’s free jazz soundtrack follows the ebb and flow of vibrant swatches of color as they diagonally scurry across the screen. Music was also central to Liisa Lounila’s Gig (2007), which navigates the crowd in a dark, smokey nightclub to a dramatic score by a string symphony. The camera traverses the bar while the film’s subjects - young, fashionable club-goers - remain completely still, illuminated by fluttering light. Lounila has developed a technique in which she scans and edits images taken using a 360-degree pinhole camera capable of recording shots from many different angles at once. The end result imbues her films an almost holographic quality. The Netherlands Media Art Institute had some rather humorous technical problems during their screening, thus Dutch media artist eddie d’s Heads and Globes, Similarity Matrix (2008), which begins with a warning for those prone to epileptic seizures, mistakenly launched roughly five times by my count. The beginning of the work scrambles together logos and sets from television news stations featuring a map of the world, and swiftly speeds up to superimposed footage of newscasters. By layering this material, eddie d reveals the uniformity of both the design and format of news programs. Seoungho Cho’s meditative Buoy (2008) was tranquil in comparison. Featuring a soundtrack by sound artist Stephen Vitiello, the film compiles footage of California’s Death Valley, separated into multiple vertical bars presented side-by-side, to create a roughly hewn landscape. Most of the distributors showed only new and recent work, but Electronic Arts Intermix set themselves apart by also including restorations in their program, such as a number of comedic shorts by Stuart Sherman from the 1970s and 1980s, and Jud Yalkut’s Opera Sextronique, a 1967 restaging of Charlotte Moorman’s topless cello performance, one of Nam June Paik's most well known happenings. 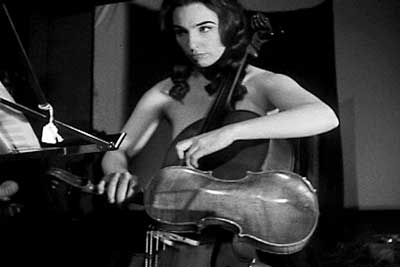 Gather together thirteen distributors of media from all over the world, and ultimately questions concerning copyright will arise, especially given video’s extensive dissemination online. Indeed, the topic for Saturday morning’s panel, “Copyright and the Moving Image, online” addressed this pivotal issue. Moderated by Rebecca Cleman from Electronic Arts Intermix, participants included Julieta Aranda, an artist and curator involved with e-flux (and their video rental service), author and curator Henriette Huldisch, and lawyer, artist and curator Brian L. Frye. Admittedly, I attended the panel with a bit of trepidation, thinking that the discussion could potentially disintegrate into an unnuanced argument for more control and regulation of copyrighted content online. Thankfully, Cleman laid the groundwork for a quality conversation by presenting major points by proponents of copyleft and the free culture movement, as well as an overview of Electronic Arts Intermix’s own utopian history. Frye was on hand to clarify the details of copyright law and its variations from country to country with his legal expertise (and sharp wit). Huldisch and Aranda discussed their own respective experiences in the art world, Huldisch with her extensive curatorial background and Aranda with her art career as well as her role in e-flux. It became evident that the major concern across the board, for every respondent, was artist’s compensation as well as protection against possible legal action. American copyright law dominated the discussion, as well as a more forward-looking approach for distributors, one that would maintain their role as an information source and archive while also adapting to the open and participatory flow of the web. In terms of new models, Cleman did not name but alluded to Ryan Trecartin’s current model of distribution, whose work is all available online, through a gallery, and then distributed through Electronic Arts Intermix for museum and educational use. She suggested that this approach would become more commonplace for some artists and seemed positive about this direction. 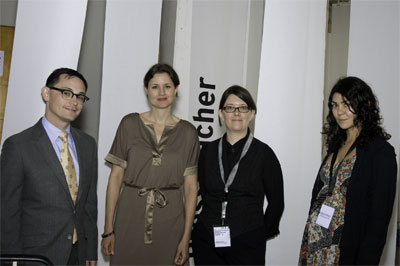 Speaking of the circulation of copyrighted work online, I finally had the chance to see Matsumoto Toshio’s work in a theater for the first time during the festival, after only viewing his films through UbuWeb. Sound is a central component to his films, something the theater setting brought out for me in a major way. He wrote many of the scores himself, but also worked closely with composers such as Toshi Ichiyanagi and Toru Takemitsu. His work ranges from surreal documentaries made in the early 1960s, such as The Weavers of Nishijin (1961) and The Song of Stone (1963), to the more chaotic, psychedelic experimentations of the late 1960s and 1970s, such as Ecstasis (1969) and Atman (1975). The Q&A sessions were informative, Toshio explained that his documentaries were made for television, and he was interested in subtlety disrupting expectations for the form, something that was particularly evident in The Song of Stone, a short film that follows the stone sculpting industry in a small town, and the villager’s belief that the stone is alive. The voiceover is throughout intercepted by the popping and tapping sounds of stones being broken apart, which gradually develops into their own rhythm. Toshio also described the selections for the final screening, which he felt reflected his interest in developing an aesthetic closely rooted in Japanese culture and history.

The “Unreal Asia” program took up the topic of an aesthetics based in locality as well, but from a different vantage point. Curated by Bankok-based academic, Bangkok-based academic and critic David Teh and curator Gridthiya Gaweewong, director and founder of the Bangkok-based arts organization Project 304 and the Bangkok Experimental Film Festival, the enormous run of documentaries, experimental films and video art included in “Unreal Asia” defined a realism informed by the cultural and historical specificity of Southeast Asia. The curators were careful, in their accompanying essay, to problematize the term “Southeast Asia” because of its historical ties to World War II military operations, and their fractured, diverse program reflects this intent. During the “Unreal Asia” panel discussion, artist and filmmaker Dinh Q. Lê cited the current explosion of relatively inexpensive tools capable of capturing moving images, such as mobile phones, digital cameras, and consumer digital video cameras, as an important factor in work coming out of the region. Mentioning the discussion between Dara Birnbaum and Cory Arcangel from the March 2009 issue of Artforum, he suggested that while their conversation set up video art as a precedent in some ways to internet-based art, that this chronology did not exist in Southeast Asia, and at the present time there was a convergence of video art, the internet, and mobile technologies due to these means simultaneously becoming more affordable to mass audiences. Given the variation of the works I viewed in the program, it might be difficult to carry this argument all the way through. I did feel filmmakers with a multidisciplinary practice produced the strongest works in the program, more a point of fact and less an indication of proof supporting Lê’s remark. Normally a looped single channel installation, Apichatpong Weerasethakul’s Morakot (Emerald) (2007) was included in the screening “Fabrications: the theatre of everyday life”. Shot in the decrepit Morakot hotel in Bangkok, which housed low-income transient populations, such as Cambodian refugees, the film pans empty rooms overlaid with white, luminescent, slowly drifting specs. The dingy interiors relay their use and past history, while the specs seem to represent the presence of the inhabitants who have passed through. These scenes are then overlaid with audio from a conversation between three actors, who discuss their memories. Another Thai artist, Araya Rasdjarmrearnsook, screened her work Dow song duang (The Two Planets Series) (2008), in the same “Fabrications” program. Also typically shown as an installation, the work was filmed in the rural countryside outside of Chiang Mai City. In it, groups of farmers and villagers are seated in front of paintings such as Jean-François Millet’s Des glaneuses (The Gleaners) and Édouard Manet’s Le déjeuner sur l'herbe (The Lunch on the Grass). The conversations which ensue loop between the subjects portrayed in the paintings and the viewer’s own lives, thus an observation regarding the health of the crops in Des glaneuses leads to local gossip, while the naked woman in Le dejenuer sur l’herbe sparks a round of boob jokes. Rasdjarmrearnsook’s intention is not to characterize the farmers and villagers as simplistic or uneducated; on the contrary, the film undermines the West’s assumed universal canonical importance of these paintings.

Divided up into ten separate screenings and eight sub-themes, the “Unreal Asia” program alone is evidence of the sheer breadth and magnitude of Oberhausen’s festival this past year. The depth of the individual programs also reflects the organizers’ dedication to covering salient topics and filmmakers with precision. From my few days in Oberhausen, I gathered that short films are alive and well. 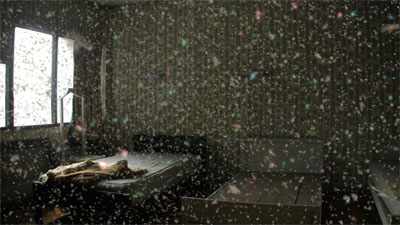