Hypertext fiction was proclaimed at its inception as the literary genre of the future, but now it already feels like a relic of the past. Ironically, nineteen years after a software company published the first hypertext story, Michael Joyce’s Afternoon, fast internet connections and popular reference sites have made habits of fragmentary, non-linear reading common enough to prepare a wide audience for tackling hypertext fiction (who clicked on the link above before finishing this sentence?), but hardly any artists and writers are making serious attempts at it. Becket Bowes is one exception. His project [sic]ipedia, conceived for and developed during SculptureCenter’s "In Practice” program, takes the form of an evocative description of an arcane curio cabinet, with backstories of the items it contains. 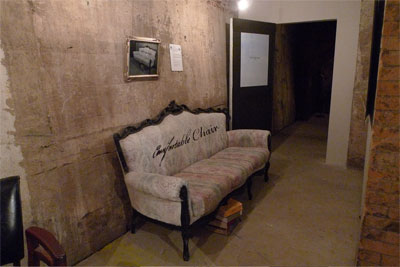 Bowes’ installation in the back of SculptureCenter’s basement was composed of those items—two Ships of Theseus, a Comfortable Chair, a simulation of Alan Turing’s death mask and a model of his bust spinning on a computer monitor, to name a few. [sic]ipedia began as a simple site, with a gray sphere and blank prompt in a stripped-down variation on Wikipedia’s home page. But over the course of the “In Practice” exhibition’s run at SculptureCenter, Bowes gathered his friends—members of the Social Isolate Club, or SIC—inside his installation, to talk out the histories and significance of the objects there. At each meeting, Bowes would take notes in composition books, and then convert the notes into pages on [sic]ipedia. Taken together, [sic]ipedia (the web site) and Social Isolate Club (the installation) suggested parallels between reading hypertext and viewing an installation: both give the viewer a degree of autonomy in ordering their perception of several discrete elements and determining the nature of the connections between them.

[sic]ipedia’s rhyme with Wikipedia and its mimicking design are about more than the major site’s role as the ultimate hypertext: the default choice for finding supporting information on an unfamiliar name or concept, and thus the point to where all links eventually lead. Bowes is also interested in nomic games, where play is governed by mutable and immutable rules (remember Calvinball?). Players can change, cancel, and invent new mutable rules, and even decide whether to make immutable rules mutable. Wikipedia, Bowes says, is like a nomic game. It is a sprawling, constantly expanding system, where guidelines have to be introduced and modified constantly, and any experimentation with Wikipedia’s form and content must be arbitrated by the users who have been “playing” the longest. In the past, Bowes has tried (unsuccessfully) to manipulate the system. He clashed with the Wikipedia’s authorities of a page for a variable “Bill of Rights,” a project that highlighted the nomic nature of law and government. While it lacked the cloying self-referentiality of the embattled Wikipedia Art, Bowes’ Bill of Rights was likewise doomed to deletion. The Social Isolate Club apes Wikipedia’s moderation system just as [sic]ipedia visually imitates the end result. The ideas members propose for the text can be sustained, rejected, and adjusted before Bowes codifies them on the site.

Though the Social Isolate Club continues to convene in other locations, [sic]ipedia has barely changed since the end of “In Practice” in late March, and remains an artifact of the project. Bowes doesn’t intend to change it. Instead, he has his eyes on bigger, novelistic hypertext projects. He believes the genre is not spent, yet is aware that the conditions that have prepared audiences for reading hypertext fiction also pose a serious challenge to it: any work that exists on the internet will have to be engrossing enough to hold readers’ attention in an environment full of distractions.