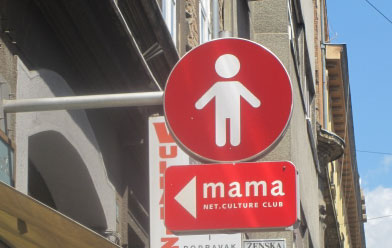 This month I’m traveling through southeastern Europe from Venice to Athens, where I’m looking at art and blogging. Part two of the travelogue is about Zagreb, Croatia. Part one is here.

Zagreb’s center has more street names than streets; the names change every few blocks so meters can be allotted to every worthy Croatian hero. And many names differ from the ones streets bore twenty years ago, since a different history needed to be inscribed in Zagreb’s map after Yugoslavia dissolved and Croatia became independent. “The Renaming Machine,” an exhibition currently on view at Zagreb’s Galerija Miroslav Kraljevic, addresses the obsession with names. Sanja Ivekovic’s contribution is inspired by Zagreb’s Street of the Unknown Heroine—a name that is both unsettling and appropriate when virtually all other streets are named for men—which takes the form of a poster with maps, e-mails, and other supporting documents describing the artist’s attempt to give the same name to a street in Utrecht during her retrospective at Van Abbemuseum. 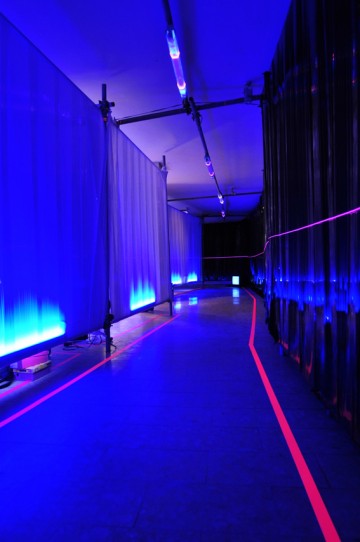 Image: Installation at Touch Me festival in Zagreb, December 2008

Just as street names reflect political values, so do the uses of buildings on them. After arriving in Zagreb and settling in the Angelina Jolie room at The Movie Hotel, I met with Tomislav Medak, director of Mama, an organization that was founded in 1999 as a center for internet activists and artists, but in recent years has shifted its attention to urban development, specifically the use of former industrial sites that abound in Zagreb (as they do in many other large, formerly socialist cities). Mama lobbies the municipal government to reserve abandoned factories for public use—whether cultural activities or low-cost housing—rather than handing them to private investors. But it also keeps up its media-art legacy through collaboration with Kontejner, a curatorial collective with annual exhibitions that alternate thematic focus on machines and bodies.

Mama was founded in 1999, and Kontejner made its first exhibition in 2001; the turn of the millennium was also a turning point in Croatia’s cultural scene. “Up until 2000 Croatia was asleep,” said Klaudio Stefancic, director of Galerija Galzenica. In the 1990s, the country’s cultural life was hindered by war and a nationalist regime. As a result, Stefancic said, only recently have the conceptual and post-conceptual practices of artists like the aforementioned Ivekovic, Mladen Stilinovic, and David Maljkovic formed the artistic mainstream in Croatia. But now that they have, Stefancic feels a need to showcase work outside that mainstream, whether it is painting or media art. Galzenica is in Velika Gorica, which was part of the outskirts of Zagreb until it got so big it balkanized into its own city. The “House of Culture” where Galzenica is located shares a public square with residential buildings, and the rehearsal rooms and library that coexist with the gallery were intended for the intellectual enrichment of the neighbors. The Sunday before last, when I visited, this artifact of 1980s utopian urban planning bustled with the activity of a cheerleading competition, as adolescent girls in sequined uniforms danced in the square and crowded the House of Culture’s stairwell. 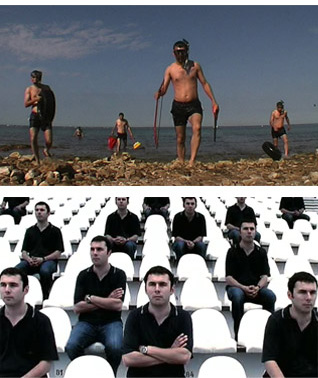 Galzenica was exhibiting the four nominees of the Radoslav Putar prize, which is awarded annually to a Croatian artist under thirty-five. (Galzenica provides exhibition space but does not organize the award or participate in the selection process.) The winning work was Corpus by Goran Skofic, an installation of six looping videos in which multiple images of the artist perform repetitive leisure activities: rows of Gorans in tuxedoes applaud at the theater, a team of Gorans lifts weights at the gym, and so on. Play figures in the work of another of the four exhibited artists, who showed a hopscotch game made of engraved tombstones and a unicycle capped with a deadly spike. Fun is a distraction from life’s inexorable passage toward death, the artist seems to say, in a tone as scolding as a surgeon general’s warning. Skofic, on the other hand, approaches the topic with humor, letting play overcome time with the artifice of the loop, and exaggerates it with the absurd simultaneity of his body repeated within the frame of each video and across the six monitors. In Zagreb, where the abundant plaques and statues in the streets represent an official attempt to seize time with static monumentality, Skofic's fluid, funny installation really is more worthy of prizes.