"The World Is Flat" Rhizome at X Initiative's No Soul For Sale: A Festival of Independents
By Rhizome 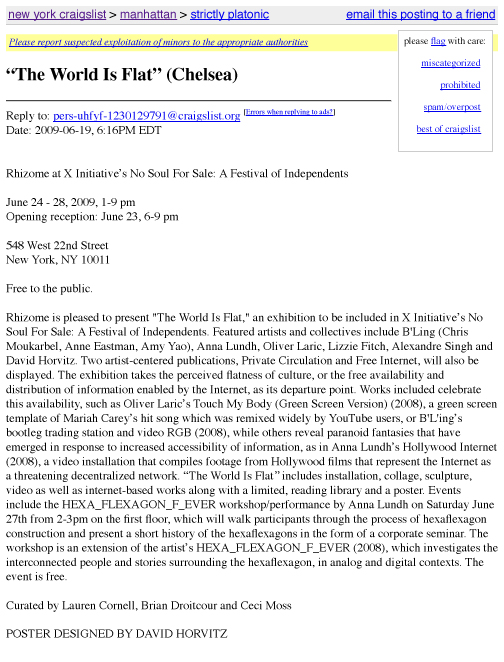 Image: "The World Is Flat" Poster by David Horvitz

“The World Is Flat”

Rhizome at X Initiative’s No Soul For Sale: A Festival of Independents

Free to the public.

Rhizome is pleased to present "The World Is Flat," an exhibition to be included in X Initiative’s No Soul For Sale: A Festival of Independents. Featured artists and collectives include B'L'ing (Chris Moukarbel, Anne Eastman, Amy Yao), Anna Lundh, Oliver Laric, Lizzie Fitch, Alexandre Singh and David Horvitz. Two artist-centered publications, Private Circulation and Free Internet by AIDS-3D, will also be displayed. The exhibition takes the perceived flatness of culture, or the free availability and distribution of information enabled by the Internet, as its departure point. Works included celebrate this availability, such as Oliver Laric’s Touch My Body (Green Screen Version) (2008), a green screen template of Mariah Carey’s hit song which was remixed widely by YouTube users, or B'L'ing’s bootleg trading station and video RGB (2008), while others reveal paranoid fantasies that have emerged in response to increased accessibility of information, as in Anna Lundh’s Hollywood Internet (2008), a video installation that compiles footage from Hollywood films that represent the Internet as a threatening decentralized network. “The World Is Flat” includes installation, collage, sculpture, video as well as internet-based works along with a limited, reading library and a poster. Events include the HEXA_FLEXAGON_F_EVER workshop/performance by Anna Lundh on Saturday June 27th from 2-3pm on the first floor, which will walk participants through the process of hexaflexagon construction and present a short history of the hexaﬂexagons in the form of a corporate seminar. The workshop is an extension of the artist’s HEXA_FLEXAGON_F_EVER (2008), which investigates the interconnected people and stories surrounding the hexaflexagon, in analog and digital contexts. The event is free.