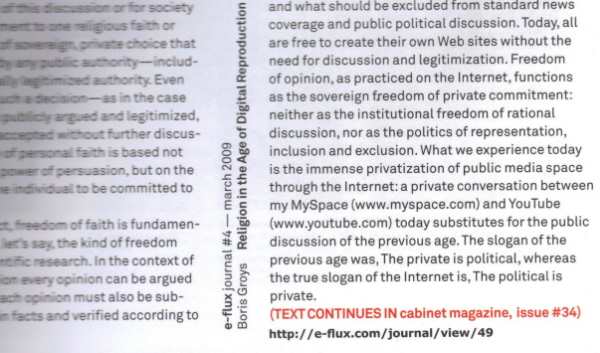 From its beginnings ten years ago, e-flux has been an unconventional media model, one that aggregates and distributes announcements for contemporary art exhibitions and events for a fee and uses its profits to fund artist-directed projects. Last November e-flux introduced an online journal with essays by artists and critics. The advertisement-free publication filled a position similar to that of ads in magazines—an appendage that subscribers to the e-flux brand may or may not find useful. To increase the journal’s autonomy from the announcement service—and also to get it off the internet, which is not a favorable environment for long and complex theoretical essays—e-flux announced its plans for a “print-on-demand” feature in February (noted on Rhizome). To get the word out about this new service, e-flux put excerpts of essays from its fourth issue in the summer issues of Parkett, Artforum, Bidoun, Cabinet, Texte Zur Kunst, Afterall, Flash Art, and Frieze. Besides addressing the obstacles an online journal faces in specialized art media, where print still holds a privileged position, the use of editorial as advertising in e-flux’s summer campaign anticipates the shift that will accompany the launch of their print on-demand service this fall, when the journal’s readers can also become its publishers.