Out of Context: Artists and Web Inventories
By Greg J. Smith

On any given day, the average web user may log into as many as a dozen different social web services. Interaction with these sites could involve any number of activities including browsing photography, commenting on blog posts, planning trip itineraries, looking for a lover or updating a resume. While the sequential (or parallel) manner in which we navigate these databases and the generic aesthetic of the web 2.0 interface might suggest these sites form a unified network, that is simply not the case. In engaging the social web we voluntarily fragment our interests, social ties and demographic information in order to make them "machine readable" and allow us to participate in these communities. With these rules of engagement in mind, several recent projects speak to these conditions and explore the notion of web inventories in relation to identity, aggregation and as binding legal agreements. 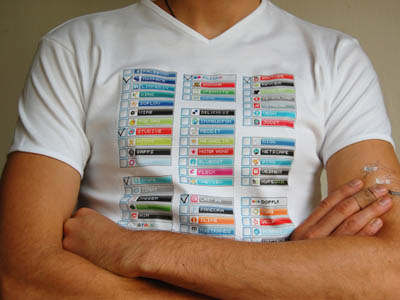 Like much of his other work, Aram Bartholl's Are you social? (2007) exhibits a nuanced optimism towards social media. The project is founded on the notion of a wearable checklist with which an individual can highlight their "networks of choice" from a selection of about 80 services. Bartholl repurposes the T-shirt (the ultimate canvas for self-expression) as a surface upon which users can advertise their personal interaction with the web. Donning one of these shirts would provide new acquaintances the opportunity to execute a rather revealing once-over and quickly determine the online activities of the user. In preparing the visual checklist, Bartholl collaborated with Markus Angermeier who created a series of "micro-buttons" which consolidate the names, logos and color schemes of leading web services into a standardized wearable display - the T-shirt as webform.

A superficial reading of this work might interpret it as an unconditional surrender to Web 2.0 but, in fact, there is a tension that underlies these arrays of candy-colored logos. Are you social? compresses the web into miniature form; it suggests uniformity when it flaunts the distributed self. When this shirt is filled out and worn, what exactly is it telling us about an individual? Furthermore, how much is revealed through the personal inventories we create in engaging these platforms? In his statement for the piece, Bartholl contrasts online exhibitionism with the restraint and privacy associated with city life: "In the network the private lives of a wide range of people are revealed, sometimes with elaborate reports of the previous night's party. The new services present great potential benefits for the user, however the extensive transparency poses many questions." While he concludes that users have to learn to use these services, Are you social? suggests the public's need to learn how to read them.

This year, Bartholl will be further investigating the idea of social media as wearable technology with his What are you doing? T-shirt, a prototype for displaying social network "status" on clothing that he is currently developing at the V2_Lab in Rotterdam. 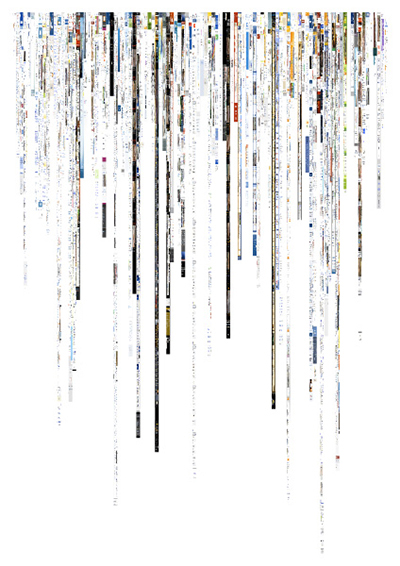 Christian Marc Schmidt's Compressed Portals (2008) is another example of what might be described as a web inventory. The project utilizes the Alexa Top 100 metric to identify the most popular websites by country and, true to the name of the piece, screen captures from these sites are horizontally compressed, ranked and displayed on a single A0 panel. The sites populating the image above were the top web sites in the United States on June 4th, 2008.

The fact that Compressed Portals draws web data from Alexa is worth noting. Having existed for a decade, the web ranking service is the most recognized (if not most accurate) benchmark in monitoring commercial web traffic. This speaks to the tone of this piece as an aggregation of the general web experience of an entire nation. If Are you social? questions the possibility of self-expression across networks, Compressed Portals is decidedly impenetrable - the browsing habits of tens of millions of web users homogenized into one amorphous gestalt. The piece takes the web off the screen and reimagines it as a new, tangible artifact, one that is part bar graph and part abstraction. 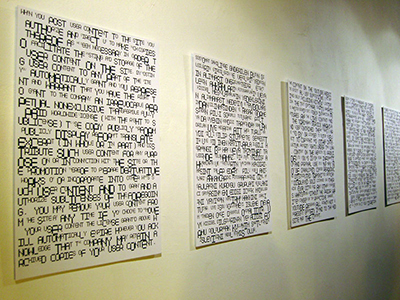 Terms & Conditions (2007) is a project by Burak Arikan which reconsiders the text of the terms of use from popular social media services. In signing up for these sites, users tend to overlook the (often ambiguous) binding legal agreements that dictate acceptable conduct and outline the ownership of content. How many people actually study these statements? Furthermore, how intelligible are they to the average reader? Arikan repurposes the terms and conditions from five services and uses this content as material to construct new texts. These legal documents have been re-typed and filtered through a generative script, reconstituting them as typographic experiments that are far too idiosyncratic to be ignored. Arikan describes the goal of this exercise as "recycling unread terms & conditions" and "pointing to the moment where people give away their rights to [social] capital." This desire to draw attention to the ownership and value of user-generated content is evident in Arikan's other projects - most notably in Meta-Markets (2007) and User Labor (2008) which were produced with collaborators Engin Erodgan and Cenk Dölek.

Are you social?, Compressed Portals and Terms & Conditions all function as aggregators of web culture, transporting familiar online experiences away from the context in which we normally encounter them. These works can be read as inventories of affiliation and economies of attention, they reposition social media and web services as objects to be considered rather than simply consumed. As notions of identity and presence become increasingly networked, it is crucial that users remain mindful not to lose themselves nor take their agency for granted.

Greg J. Smith is a Toronto-based designer and researcher with interests in media theory, representation and digital culture. He co-curates and edits the online digital arts publication Vague Terrain and blogs at Serial Consign.

Terms and Conditions made me wonder how aware users are of their loss of control when they choose to participate in these different networks. I think all users understand that they have to play by some rules in each different online environment - but I think some of those rules are as surreptitious as language, and control the kinds of content available without necessarily making the user aware of that control. How calculated are the interfaces? How aware are users that their contributions are limited and guided? How much does this contribute to the popularity/success or failure of a network?

I don't think users are necessarily that aware of how limited their agency (or ownership) is on social web services, I think are happy to be "tourists" on these platforms and just happy to be at the party. I have friends who do 95% of their link sharing and emailing through Facebook - what happens to this information if they want to leave in three years? Would Facebook let them export this data as the basis of a new blog project? Probably not, I know people who have had their accounts mysteriously deactivated with no explanation. I'm not trying to render the administration of Facebook as melodrama, but these (and your) questions kind of linger in the background - eventually they will have to be answered.

In their own ways, I really think the above projects are useful tools in scrutinizing these web services.

In thinking about this post over the last little while I've returned to Geoff Cox's Antisocial Notworking. http://project.arnolfini.org.uk/projects/2008/antisocial/