As promised, I attended last week's "24-Hour Program on the Concept of Time" at the Guggenheim and wrote the following report, which attempts to convey both the variety of approaches participants took to the symposium's broad topic as well as the experience of being present and alert for the full duration, with just a break for breakfast and a few power naps.

The HUO-year is a unit of time invented by art critic Jennifer Allen to measure how far in the future a name will be remembered. You get one year for each project, two for an exhibition, seven for an interview, etc. HUO expands to Hans Ulrich Obrist, the curator whose intellectual hyperactivity inspired Allen to write a wry essay predicting that Obrist's omnipresence in the present will guarantee him more future name-recognition than John Cage, even as a performance of the latter's ORGAN2/ASLSP (As Slow As Possible) continues to hum through the year 2639. Obrist racked up a few dozen more HUO-years at the "24-Hour Program on the Concept of Time," as did the event's organizer, Guggenheim chief curator Nancy Spector. With an eye to the future, the entire Program was recorded, and at this moment the Guggenheim's curatorial staff is surely working to label, transcribe, and catalogue those videos for posterity. In the meantime, here's an elliptical and incomplete summary.

The symposium began with a talk by philosopher Ted Sider, who gave a lucid description of the theory of static time, which proposes that entities are permanently present at points in space but are only visible to us at certain points in time. Next was Joshua Viertel, president of Slow Foods USA, an earnest nonprofit administrator who made a case for organic, home-cooked cuisine as the relational aesthetics diet. The audience swelled when time-travel specialist Ronald Mallett took the stage. Even Spike Lee, who is currently working on a film about the physicist's life, was there. Mallett has been fixated on building a time machine since he was 10, and when he completes the project he plans to go back and spend more time with his father, who died of an unexpected heart attack. His lecture refuted the Grandfather Paradox, although it didn't exclude the possibility of a temporal loop in which the senior Mallett's heart attack was caused by the shock of a visit from his adult son.

Marianne Weems, director of the performance ensemble The Builders Association, presented excerpts from her group's project with Diller + Scofidio about an elderly woman who flew between New York and Amsterdam 167 times, until she died of jet lag. Architecture critic Sanford Kwinter said he had planned to play recordings of African drums, expecting the Program to be a "wild, operatic kind of party," but conformed to the quasi-academic decorum and delivered a rangy lecture centering on syncopation and cyclical time in African music. Drew Daniel, professor of English at Johns Hopkins and half of the electronic music duo Matmos, described the Program as an "exemplary experimental music score," with Spector in the role of composer and conductor; he likened recurring ideas to leitmotifs and the 25-minute limit on talks to a tempo. Daniel went on to discuss opposite concepts of time reflected by two poles of experimental music: the stretch of eternity evoked by the drone and noise music's forced confrontation with the passage of the present. Later, erstwhile raver and sometimes artist Nate Lowman played a groaner of prank -- he turned out the theater's lights and turned on the worst possible trance music in "an ode to relational aesthetics and the '90s." Bassist and graphic designer Richard Maguire touched on aspects of time relevant to both of his occupations, and presented his comic Here, where panels are split into quadrangles showing scenes that occur in one place at different times, from the Jurassic Period to the twenty-first century. It was an effective visualization of the concept of static time mentioned at the beginning by Ted Sider.

Julieta Aranda gave a report on her visit to the South Pacific island nation of Kiribati, which in 1995 put a dent in the International Date Line so all 32 of its atolls could be on the same day. Then the audience thinned considerably, both because of the time (it was after 2:00 a.m.) and the discomfort of watching Agathe Snow limp through her attempt to sell minutes of her next twenty Sundays ("I had so much to say, but now I'm so tired"). I took a break to stroll around the museum and look at the simultaneous offerings: documentation of Obrist's past marathon events at Serpentine Gallery and Douglas Gordon's 24-hour psycho back and forth and to and fro, a split-screen reworking of his 1993 24 Hour Psycho, which slowed the Hitchcock film to a full day. Back in the theater, speakers made efforts to keep the remaining audience alert. As film theorist Amy Herzog spoke about looped porn in coin-operated booths of the 1960s and '70s, she played a few specimens on the screen, mostly of coy girls in lingerie, though the last ones showed men engaged in anal smoking and scat play. Liam Gillick offered a few pithy explanations for why so many people disliked "theanyspacewhatever." (An example: "When you take artists whose strategies are to be parasitic and promiscuous and put them in the center, you'll get a strange result.")

Earlier in the evening, Groundhog Day screenwriter Danny Rubin had described his protagonist Phil's experience in the time loop as the opposite of sleep -- something like the continuing, excruciating awareness that an insomniac has while everyone around him is deep in oblivion. As the symposium rounded the halfway point, I felt a bond with Phil. And I sympathized with the psychedelic musicians of the '70s mentioned by Drew Daniel, who believed that time's passage could be most acutely experienced through altered mental states. In my case, the drug was the acrid espresso provided by coffee sponsor illy, especially potent in combination with the natural effects of sleep deprivation and the tingle of prolonged intellectual stimulation. I could tell that some of my reactions to my environment were abnormal, but I just surrendered to them as ways to pass time. In my notebook I wrote nasty things about speakers who rambled longer than 25 minutes. I became mesmerized by the binary clock whose ticks blinked on stage left throughout the Program, and would jot down times that yielded particularly pretty configurations of dots. The passage from 12:01:59 to 12:02:00 blew my mind. 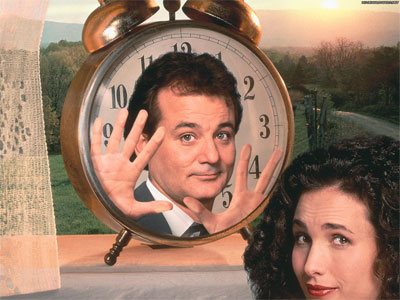 Listening to talk after talk also afforded an opportunity to reflect on the ways a thinker can organize and transmit information relative to time and how that affects the audience’s perception. Purely expository lectures -- like evolutionary biologist Don Melnick's linear sprint through the history of life and the universe, or Whitney curator Chrissy Iles's list of landmark time-based artworks of the 1960s and '70s -- doubled the mostly sequential logic of the Program itself, and thus seemed to exaggerate the duration of the event as a whole, i.e. they felt really long. Conversely, I lost track of time while listening to speakers who made a montage of time, cutting across periods and disciplines to make their points. That was the case with Kwinter, Daniel, and -- later in the program -- artist Matthew Ritchie, who talked about quantum physics, its connections to utopian thought, and how he rendered its concepts in drawings and sculptures.

So it was a smart choice to conclude the symposium with a temporal fold: a repeat performance of a piece conceived by artists Angela Bulloch and David Grubbs that had been played at 11:00 p.m. Written for guitar, trumpet, and bass, the work featured a three-tone motif like a clock's chime that on alternate iterations would undulate in a kind of drawling ornamentation; it kept disappearing and reappearing amid a drone-like texture. On the first listening, I heard the piece as a meditation on how a motif or sonority retains its identity through parameters of pitch, duration, and timbre, even as the listener perceives it differently because of its changing relationship to other musical elements. The repeat performance extended that principle from the motif to the entire piece. It was powerful, nonverbal expression of the concepts of time and change. Like the Program's many other you-had-to-be-there-for-at-least-seven-hours moments, Bulloch and Grubbs's act of embedded repetition reminded me that, as illuminating and stimulating as the lectures were, they ultimately proved that time remains an elusive, confounding phenomenon, and that we still lack the vocabulary to adequately describe it. And while the presentations will have a long life in documentation, the Program's true value was ephemeral, not in its content but the audience’s reception of it -- something that words and HUO-years are unable to measure.