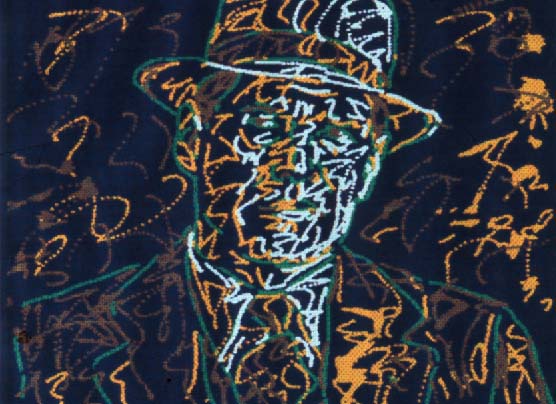 Image: Portrait of Willoughby Sharp by Gregg Smith (via Sharpville)

When the independent curator, publisher, writer and art dealer Willoughby Sharp died this past December at the age of 72, the art world lost an iconic figure. Active internationally in the art world since the early 60s, Sharp's name is most often associated with his role as the publisher and co-founder (with Liza Bear) of Avalanche magazine (1970-1976) and for his curation of the seminal art exhibition Earth Art (1969). Avalanche has become something of a cult classic in the art world. Consisting mostly of idiosyncratic editorials by Sharp and Bear and interviews with figures such as Joseph Beuys, Yvonne Rainer, Bruce Nauman, Lawrence Weiner and Vito Acconci, Avalanche helped define the art of an era while also redefining the role of the art magazine. The editors viewed Avalanche as an open space for artists and art, and this vision dictated the overall direction of the magazine. Sharp's seminal Earth Art, held at Cornell University in Ithaca, New York in 1969, was the first major exhibition of land-based sculptural work, and it included artists such as Walter de Maria, Robert Smithson, Hans Haacke, Robert Morris, Richard Long and Dennis Oppenheim (among others). It has also become somewhat mythologized as the exhibition where the young Gordon Matta-Clark, who lived in Ithaca, was hired by Sharp as an assistant and, thus, met the vanguard of the international art scene for the first time. 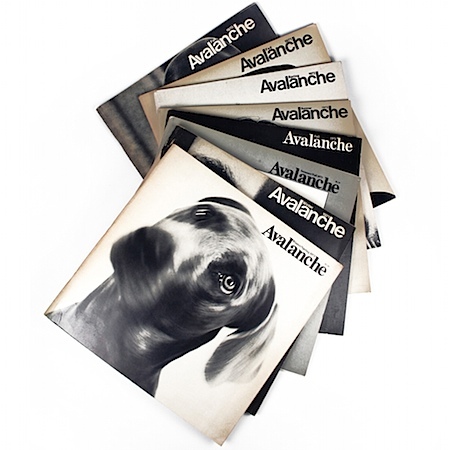 However, it should be noted that Sharp, himself, was also a performance artist, video artist, satellite artist and computer artist. In fact, his work at the nexus of art and technology is one of the most passionate chapters in his career, but has largely gone unnoticed. The art historian Frank Popper (who met and befriended Sharp in 1968) has offered one of the few accounts of this work in his book From Technological to Virtual Art. According to Popper, the introduction of television to American culture in the late 1940's had a tremendous effect on Sharp. "Almost instantly after DuMont television sets began to dominate living rooms and lives in 1948, television took control of Sharp, and he was transformed from just watching "Uncle Miltie" to being him," writes Popper.

This question of the body's location in electronic media is a theme that persists through Sharp's Toward the Teleculture, an unpublished manuscript of technology-related texts written between the years 1967 and 2007. Spanning critical assessments of late 1960's kinetic, system-based art to theories and projects involving satellite transmissions and early computer networks, Sharp's telecultural oeuvre is, in retrospect, both admirably prescient and compellingly relevant for contemporary new media art practitioners. I met Willoughby Sharp in the spring of 2008 with the intention of helping him organize his archive. While the bulk of this archival work never materialized due to Willoughby's failing health, I was able to introduce myself to the texts contained in the unpublished Towards the Teleculture manuscript. Willoughby handed me a binder containing photocopies of the texts, some of which were previously unpublished, self-published in small runs or published in art and technology periodicals like the San Francisco-based Artcom. Sharp's writing on technology is extensive, and worthy of larger study.

One theme that consistently surfaces in this body of work is a suggestion that as technology allows people to beam televisual representations of themselves over long distances, the boundaries of the human body become blurred into a paradigm of mixed reality encompassing physical and virtual space. In the mid-1970's, for instance, Sharp began to create intensely physical performance pieces that incorporated experimental live video broadcasting techniques. Although the performances occurred "live" and "in-person," the audience was only able to see a video representation of Sharp's actions. The boundaries of live/embodied performance, then, became indistinct as the physical and virtual Sharp were both "live." An example is the video installation piece, Help! (1974), wherein he takes LSD, bangs his head against a wall and - as he described in Avalanche's video/performance issue from 1974 - "experience(s) increased losses of consciousness and bodiness to the point where several people have said, 'Willoughby, you're totally over the line, completely crazy.'" While discussing this integration of the body and real-time video transmission, Sharp declared, "I'm not a static self. I'm made up of fragments. I see myself in multiplicities, a multiplicity of roles, of states of mind, of states of consciousness." It is unclear as to whether or not Sharp was reading the philosopher Gilles Deleuze in 1974, but his use of the term "multiplicity" fits well into the concept of qualitative multiplicity that Deleuze was developing in the late 1960s and early 1970s in books such as Bergsonism (1968) and (with Felix Guattari) Anti-Oedipus (1972). Very roughly, a multiplicity is for Deleuze an immanent, continuous flux of points adding up to a rhizomatic whole. It is never static and one part of a multiplicity is valueless unless connected to the rhizome of other dimensions that compose the entire multiplicity. In the case of Sharp's performance, we are presented with the physical body, the drug-altered body and the video body. In the context of the live performance, they are all a multiplicity that, for the sake of convenience, we call "Willoughby Sharp."

When he began to integrate satellite transmission of video images into his work, he became even more attentive to the sense of himself as a non-static multiplicity. In Send/Receive Satellite Network: Phase II (1977), a project organized in conjunction with his Avalanche co-founder Liza Bear and the artists Keith Sonnier, the trio, [with Duff Schweninger and Paul Shavelson] working under the name "Send/Receive Satellite Network," received permission from NASA to put the American/Canadian CTS Hermes SATELLITE to use for a demonstration of its capabilities in linking the ArtCom/La Mamelle Inc art center in San Francisco to the Center for New Art Activities in New York. The result was a three-hour program of interactive, satellite-transmitted art -- the first of its kind. Looking back at the satellite transmission six years later, Sharp told an interviewer, "...when I went on camera for a two way demo, I felt viscerally transported the 22,300 miles up to that satellite and down. I actually felt that in my body." 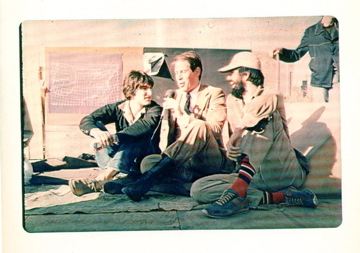 In the 1979 monologue performance piece, THE PHONE IS MY CLONE, Sharp describes a similar blurring of boundaries between his body and technology. In this case, the process occurs through a telephone. By the end of the performance, which took place at 75 Warren Street in New York on May 19th, 1979, he states that his telephone is merging with computer memory and something called the "World Info DataBank," which seems to be a compelling forecast of the Internet. The text of the monologue is worth quoting at some length. He begins by stating,

My telephone is not just a simple machine that simulates human functions. It's my clone. Like Adam's Rib, it was cut from my body to duplicate me. My mouth. My ears. My mind. My clone acts as they do. I identify with it. I call it by my own name. When someone phones me, I answer Willoughby Sharp. For short, I call it "Sharp." I ask others to do the same. When it rings, I say "Would you answer Sharp?", not: "Would you answer the phone?"...We are symbiotically one. Identical. Like me, it is multi-dimensional. Often it becomes my abandoned body, a shell of self. Sometimes, it is my mind's embodiment, consciousness. When I sleep, it is ready to respond. When you want me, dial (212) 431-6560. 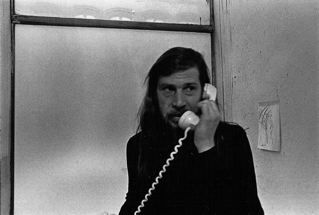 And he concludes by explaining that after attaching a computer to his telephone, affording it vast memory storage and allowing it access to the "World Info DataBank," his consciousness is able to extend itself into a vast technological network. He says,

Realizing my ultimate goal, I begin to network. You now become one of many. The lines overload. I find other relations for my clone. My clone begins to change me. I become a function of its functions. I become more satisfied. I slowly see the future. I will go where (212) 431-6560 takes me.

The computer's ability to transmit large quantities of archived information along with televisual imagery and verbal communication may have caused as much of a shock to Sharp's sense of "real self" as Popper suggests television did to the preteen Sharp. His first encounter with a personal computer terminal occurred in January of 1977. In the very same year, Sharp, with Duff Schweninger and Paul Shavelson, organized the Computerized Arts Network or CAN with money from the National Endowment of the Arts, the first NEA grant awarded for a pre-internet computer art project. Initiated at the Franklin Street Art Center’s L.I.P. (Live Injection Point), CAN's objective was to create a horizontal, non-hierarchical, multi-directional and multi-national network of computer terminals shared between individual artists and art centers and operating over telephone lines. In a 1978 essay, Sharp predicts that in the 1980's,

every educated person will learn to use a computer terminal. Word processors will replace typewriters, TV screens will supplant paper. Computer memory will supercede much human memory... if you are not at your home computer facility, you will be able to transceive via your computerized TV-Telephone wristwatch. Almost everyone in the world will be online.

By 1983, Sharp goes so far as to state that his desire in life is to "disappear into the culture as just a resonance, a frequency, a distant star that you know is there and plays a part." And while this may sound like the stuff of science fiction, it is, Sharp explains, completely possible and, in fact, actually occurring due to the entirely new relationship to time that teleculture has enabled. He writes,

When the computerized mind begins to lock in, and starts phasing out the old mind, one's behavior changes. One of the first effects is the marked mitigation of the distinction between public and private consciousness. A manifestation of this is an increasingly altered sense of ourselves as we become more mediaized; our teleselves become our real selves. We lose our deep private selves in publicity. And we begin to measure our lives in a series of snapshots, newspaper clippings, home movie chips, videocassettes, TV program spots, computer software...This changes our sense of time. Once media/computerized, we can never die. We are always available - on tape.

According to Popper, Sharp was "taken by surprise" when HTML coding and Mosaic paved the way for the popularization of the World Wide Web and web browsing. He quickly secured a (no longer active) URL for himself - sharpgallery.com - and began a "grand unification project" where all of his videos would be transferred to digital formats and, thus, be given a second life.

Sharp's wife, the artist Pamela Seymour Smith Sharp, now maintains an online social networking site called Sharpville that is an actively evolving virtual extension of Willoughby Sharp. The 132 members of the network have uploaded over 300 photographs, a dozen or so video clips, twenty-four external links and maintain an active message board. It seems, then, that Willoughby Sharp was right. He will always be available -- online.

Gene McHugh is a writer based in Brooklyn and Tivoli, NY.