The Dark Ages
By Ceci Moss 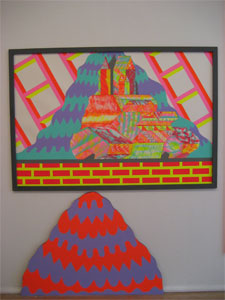 Responding to the unease and restlessness of late 1970s Britain, The Fall wrote a song in 1979 declaring the emergence of a "2nd Dark Age." For the two-minute duration of the song, Mark E. Smith rails against the omnipresent political and social inertia of the time, and the lyrics take specific aim at the short sightedness and staleness of hippie politics and spiritualism, which were so ineffective in the face of rising conservatism: "And the commune crapheads sit and whine, While the commons near my birthplace is now a police college"

Fast forward thirty years, and Ben Jones, in his latest exhibition at Deitch, announces another Dark Age, the "New Dark Age." Building off his solo show "Celebrate the New Dark Age" at AMP in Athens, Greece this past Fall, the galleries at Deitch could equally pass as a playground, meditation chamber or rec room. The pervasive feeling that Jones is merely replicating the same stock themes and imagery as if by rote, however, depletes the exhibition of the organic sense of leisure or contemplation often associated with these spaces. In the main room, a gigantic neon Transformer salutes the visitor, Gumby meditates in the center of three televisions, a video projection of the mesmerizing focal point of Space Wars loops incessantly in a far corner, and, in the front room, ladders reminiscent of Chutes and Ladders abound, clownishly oversized neon versions scale the walls or incessantly repeat in eye-popping wallpaper. The ambiance feels much like a commercial window display comprised of motifs from Jones's 1980s childhood. 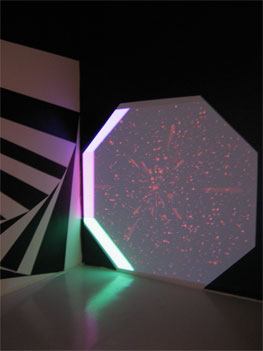 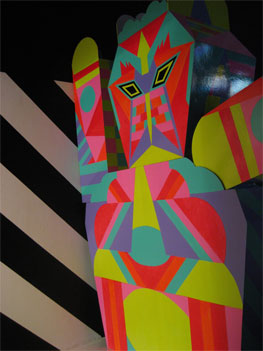 Indeed, if there is anything "dark" about this exhibition, it's the unapologetic vacuum-packed consumer readiness of it all. One wonders if, perhaps, this is the artist's intention and that it is all one grand inside joke, something the absurdity of the press release alludes to:

"The exhibition consists of five components of equal importance to the artist: Ladders, Minimalism, Cartoon Drawings, Dogs, and Bricks. Buy a pizza and throw it into a dog park. Build a doghouse out of bricks. Draw cartoons to sell to street wear corporations and gorge yourself on soft pretzels. Then come to the exhibition."

This "New Dark Age" inadvertently echoes the cynicism of The Fall's "2nd Dark Age" but, in lieu of sharp protest, it revels in its own ornamentation.