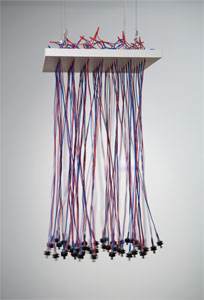 The 2008 works by British artist Tim Knowles and Swiss duo Pe Lang + Zimoun that are teamed up in Unpredictable Forms of Sound and Motion, curated by Steve Sacks at bitforms gallery, leave a bit less to chance than the title implies. The technology-driven pieces in the show take ideas originating in 60s and 70s land art, musical minimalism, and performance art, and situates them within constraints reminiscent of a scientific experiment. The result is that the works emerge as concrete entities, rather than as transient, site-specific or dematerialized experiences. 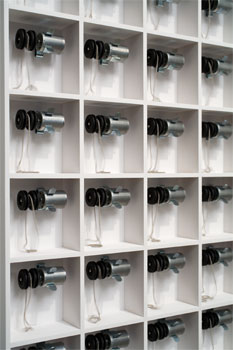 Pe Lang + Zimoun make a case for subtle deviation in the face of standardization in two of their three Untitled Sound Objects on display. Mounted in square white cases on adjacent walls, they are divided into dozens of compartments, each containing a small motor -- a total of 400 "prepared vibration motors" (little metal rods with rubber nubs at the end) in one, and 100 DC motors with small chains attached to them in the other. They must be turned on by a gallery attendant, presumably to keep the motors' high volume activity from distracting from the rest of the show or overwhelming a third, free-standing sound sculpture that provides the space with a more ambient soft rustle. Despite the uniformity of presentation and setup, the motors quickly fall out of sync with each other -- the chains rattle on at different rates of speed, creating a waterfall-like white noise, and the nubs hit different spots of each cubicle, emitting more of a machine-shop hustle & bustle hum. Likewise, the motions of the chains, which should be nearly identical, are quite varied, each doing their own kind of dance at their own pace. While early performance-oriented repetition pieces like La Monte Young's any integer for Henry Flynt (1960) stressed the perceptual differences in making the "same" sound over and over, and Steve Reich's early tape pieces' canonic permutations resulted from playing identical loops on two machines that would fall out of sync, Pe Lang + Zimoun make a visually demonstrative statement of the minor variations in what should outwardly seem like a static environment. The hive-like structures remove the factor of duration that characterizes the Young and Reich sound pieces by physically stacking the repetitions on top of each other. 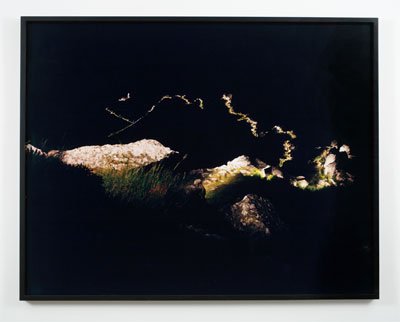 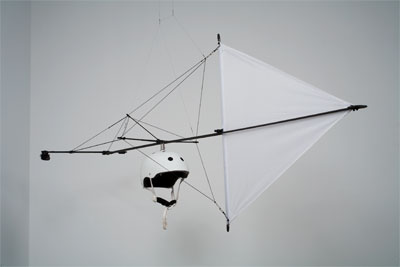 Tim Knowles' pieces have him literally finding his way in the dark. Two extended exposure photo prints from his Nightwalk -- Valley of Rocks series document a journey he made on foot through a rocky ridge under a new moon, navigating the way using high-intensity flashlights. An extreme chiaroscuro effect renders everything beyond the jagged, illuminated streaks of Knowles' path pitch-black, giving the images the look of lightning flashing across the earth instead of the sky. The grass and rocks in the foreground, close to Knowles' starting point, are as clear as they would be in sunlight, making for a similarly unnatural dual evocation of day and night. In Windwalk -- 5 walks from Charing Cross, Knowles sets out from the center of London five times, courting the unexpected by letting himself be solely guided by the wind. Again Knowles sets out at nighttime, although the city streets are considerably better lit than the country locale. In contrast to, say, Yoko Ono's 1961 conceptual piece Painting for the Wind ("Make a hole/Leave it in the wind") Knowles documents his steps in three ways -- in five dim videos, one of each walk, a print of the GPS tracking of his movements, and with an artifact: the sail-like wind vane mounted on a helmet he wore to let the wind direct him. Unlike the relatively unbroken valley trajectory, his London routes proved to be circuitous; the videos show him getting turned around and blown into physical impediments like an iron fence, stuck there until the wind changes direction, and the GPS tracking, which at a distance looks like five long, jittery lines emanating from a central point, shows a few gnarled spots of backtracking and zigzagging upon closer inspection. As with the extended exposure camera (and much like the Untitled Sound Objects' simultaneism) he conflates the London walks' time-spans, by showing the videos side by side.

The emphasis is never on Knowles himself; he becomes a conduit between the elements and his recording devices. Knowles' walks are a means to an end rather than an end in themselves, part of the process of creating an art object (a video or print), rather than an ephemeral, temporal experience of which the art object is a secondary trace. Pe Lang + Zimoun use machines to make a universal point about individualism, while Knowles harnesses various tools to chronicle the ongoing struggle between man and nature. Either way, it's determinism perhaps, rather than predictability that comes into question in this intriguing show.

Over the past two decades, guitarist Alan Licht has worked with a veritable who's who of the experimental world, from free jazz legends (Rashied Ali, Derek Bailey) and electronica wizards (Fennesz, Jim O'Rourke) to turntable masters (DJ Spooky, Christian Marclay) and veteran Downtown New York composers (John Zorn, Rhys Chatham). He has released five albums of compositions for tape and solo guitar, and his sound and video installations have been exhibited in the U.S. and Europe. With Sonic Youth's Lee Ranaldo, he founded Text of Light, an ongoing ensemble which performs freely improvised concerts alongside screenings of classic avant garde cinema. Licht was curator at the famed New York experimental music venue Tonic from 2000 until its closing in 2007, and has written extensively about the arts for the WIRE, Modern Painters, Art Review, Film Coment, Sight & Sound, Premiere, Purple, Village Voice, New York Sun, Time Out New York, and other publications. His first book, An Emotional Memoir of Martha Quinn, was published by Drag City Press in 2003; a new book, Sound Art: Beyond Music, Between Categories, the first extensive survey of the genre in English, was published by Rizzoli in fall 2007.