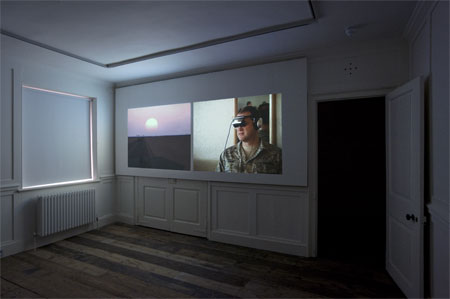 In Harun Farocki’s latest work, Immersion (2009), at London’s Raven Row in its current show ‘Harun Farocki. Against What? Against Whom?’, a US soldier from the Iraq war, coaxed on by a therapist and aided by virtual simulation, relives the experience of a reconnaissance mission in which a mistake he committed led to his partner’s death. The film, as does much of Farocki’s astoundingly relevant and astute catalogue of film and media installation work, investigates overlaps between military and industrial production - here, the use of technology pioneered in the video game/entertainment industry to treat post-traumatic stress disorder - and, most importantly, the role of the image in this negotiation.

Farocki has been making films since the late 1960s and can be labelled a critical film-essayist - a broad category drawn to include other European filmmakers such as Straub-Huillet, Chris Marker, Alexander Kluge and Jean-Luc Godard, and, latterly, younger filmmakers such as Hito Steyerl, who were or are invested in film as a mode of political and economic critique, and whose films operate mainly through the montage of footage of different provenance and the collision of word and image. Farocki is perhaps unique among these peers for his insistent focus on the image in its historical and real-world relevance - that is, in aesthetic but also ethical terms - and as a changing site of technology. The intensity of his interest and the breadth of conclusions he draws became all the more clear throughout the course of London’s two concurrent retrospectives devoted to his work this past November. While Raven Row’s program, organised by the foundation’s director, Alex Sainsbury, focused on the multi-screen and installation work that Farocki began making in the mid-1990s, when he began showing in an art world context, Tate Modern hosted a program of his films from 1968 to 2009, curated by Stuart Comer, Antje Ehmann and the Otolith Group, which took an explicitly retrospective stance towards his work. (The majority of the films from this program are available on DVD at Raven Row.)

This sense of the diachronic seems important to mention because much of Farocki’s later work gains in traction by his using his own previous investigations as points of comparison: no one else, perhaps, has been looking at images for so long in quite the same way. Indeed, Farocki’s scrutiny of the changing status of the image was the subject of his first two-screen work, Interface (Schnittstelle), from 1995, shown in London for the first time at Raven Row. Interface, which was commissioned by the Lille Museum of Modern Art as an overview of his career, maps less the developments in Farocki’s own practice than the developments in image technology between when he began making analogue films in the 1960s - cutting, splicing and feeling the film as a physical object - and his interest in digital imagery now, and what the shift to the slippery digital image means for all who produce and perceive it. 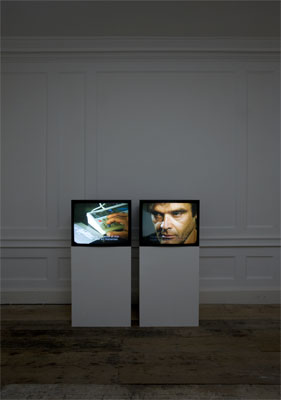 The film War at a Distance (2003), similarly, analyses the replacement of the human eye with perceptive computer technology. Here Farocki touches on not only the core concerns about innovations like laser-guided missiles (i.e., the diminishment of responsibility for taking a life) but also how this new technology affects our understanding of image-making. What, the film asks, is the status of the image generated to guide a computer in its task - an image that exists only as an in-between part in a mechanised structure, and is not made to be evaluated, aesthetically or otherwise? How deeply embedded is spectatorship to our idea of image-making?

A similar wedding of aesthetic and ethical concerns is accomplished by the film Workers Leaving the Factory (Artbeiter lassen die Fabrik, 1995), produced by Farocki as both a film and an installation. Workers opens as a study of the first film ever made (the Lumière Brothers’ actuality of the same name) and of all the later movies that have also shown workers leaving factories - Monica Vitti in Deserto Rosso or Björk and Catherine Deneuve in Dancer in the Dark. The film leaves these film-historical interests to end as an exploration of the title literally taken: the decline in jobs for the industrial working class. Raven Row showed the 2006 installation of this film, which displays excerpts of the films chronologically arranged on twelve monitors, and a comparison of the two suggests that his inquiries are better suited to the film-essay form: much of the film’s argument, particularly that of the social history of factory workers, was lost in this less mediated demonstration. 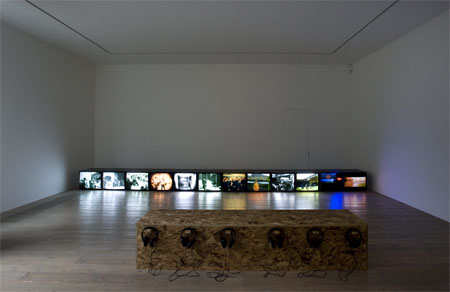 Indeed many of the most successful works in the Raven Row show were installations that deliberately employed sound and image, marshalling voiceover as well as images in their commentary. Interface, for example, pedagogically enacts montage as both a visual and oral principle. Immersion, by contrast - and by contrast to most of Farocki’s films - forgoes self-reflexivity in favor of the ‘immersion’ effect of its title. The therapy the soldier undergoes in the film is, notably, fake - it’s a testing out, a demonstration for would-be buyers of the virtual reality technology. What begins as emotional engagement, empathy with the soldier in both his ordeal in Iraq and the ordeal of re-living it, shifts fundamentally to a demonstration of the economics behind what has been called disaster capitalism. Rather than operating to undercut or comment on one another, the activity on the two screens turns out to have participated in the dream factory: an unexpected aping of Hollywood techniques. Despite being virtual and entirely imagined, the image here operates nevertheless to actualise - and it is this ability of the image to manipulate and be manipulated that Farocki’s body of work, for those lucky enough to be in London to see the two programs, displays in all its focused complexity.

Thank you Melissa for this excellent review, I totally agree with the fact that Farocki's film versions are by far more complex and interesting than his installation versions of the same work. The film "Zum Vergleich" and the double screen installation "Vergleich über ein Drittes" would be another good example in this comparison (Ironically "Vergleich" means comparison)
In the passage of questioning how the tradition of essayist filmmakers continues I found it a bit weak to just drop the name Steyerl, but disregarding two generation of fantastic artists of which some names really deserve to be mentioned here. Names like Trin T. Min Ha, Hartmut Bitomsky, Ashley Hunt, Julia Metzler / David Thorne might have been more appropriate in my opinion.
Lastly just a favor - to correct an original German title of Farocki's work…por favooor: (Artbeiter lassen die Fabrik, 1995)
has two typos in one title and would translate somewhat like Art-workers let the factory.
Verlassene Arbeiter, vereinigt euch! Thanks ~ ©

This is an engaging read, and I recommend this site about the cross-culture of high art and propaganda. Sometimes artists who work for the government are so clever, they fool the world. Is it art then? It's certainly socio-political. Many historical (and current!) events, some of them mainstream, some of them seemingly unquestionable, some of them occult, turn out to be elaborate hoaxes. It may change your life to check out the investigation into the "war on terror": www - dot - septemberclues - dot - info

Farocki has pioneered the film essay. His films digress anecdotally into associated subject matter, becoming open-ended rather than polemical. It's quite interesting to use images to comment on images.
It's good to see the review here.