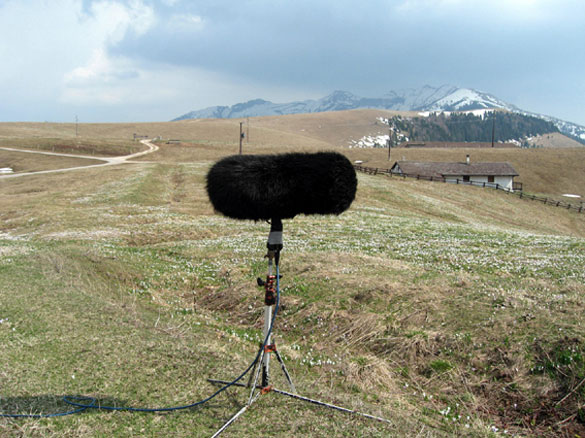 Michael Guidetti recently released the fifth edition of Skeleton Sweep, a collaborative podcast collage of field recordings and found sound. The project’s poetic title accommodates an array of meanings, from the artist’s embrace of the fleshless quality of sound on an mp3 to the wide-ranging breadth of the material’s origins. Volume 5 includes recordings as diverse as a mother’s affectionate voicemail message, wind chimes, percussive music made with knives, and black boxes of crashed planes.

Skeleton Sweep grew out of Guidetti’s longtime interest in field recordings. Before compiling Volume 1 in March 2007, he mailed a micro-recorder back and forth with a friend living in Japan, to share the sounds of their surroundings. As a serious hobbyist, Guidetti uses high-quality equipment for his own recordings—a Sony DAT walkman with an Audio-Technica stereo mic—but relishes juxtapositions of various qualities of sound. Skeleton Sweep welcomes unsolicited submissions from amateurs but also includes the work of experts, so a volume might take sound off lo-fi cassettes and cell phones as well as pieces by Chris Watson or Toshiya Tsunoda; Volume 4 even has excerpts of compositions by David Tudor and Robert Ashley. Contributors are given credit on the Skeleton Sweep site in a list labeled “Info,” though the term is a bit of an exaggeration, as the barebones descriptions of content on the list often generate more questions than they answer. In any case, when a chorus of witch cackles, a blanket of crickets, and chirping ringtones succeed each other in an early stretch of Volume 5, the connections an active listener draws between those noises—and the nuanced differences of each file’s silence—matter more than the relationship between a sound and the thing that made it.