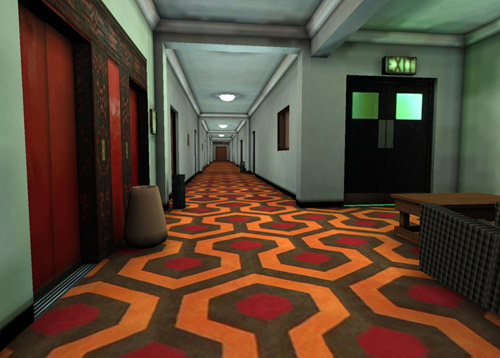 Evil Interiors is a series of sixteen digital prints that depict the sets of some of the key scenes in film history: the home of the old man in Clockwork Orange, the hotel corridor in Shining, the empty warehouse in Reservoir Dogs, the motel room in Psycho, Hannibal Lecter's cage in The Silence of the Lambs. Using the editor in Unreal Tournament 2003, Torsson worked painstakingly on the architecture and on texture of the various parts of the furnishings to make these polygonal reconstructions totally believable.

"These images point at the psychological dimensions of violence, at least those that are imprinted in collective memory. As we live in a society where violence is accepted and ritualized our own consciousness is full of images of violence which can be triggered by a digital architectural space. Violence is not actually depicted here, but it certainly exists in the eye and mind of the beholder," Torsson explains.

-- FROM AN ESSAY ON "EVIL INTERIORS" BY DOMENICO QUARANTA IN "GAMESCENES: ART IN THE AGE OF VIDEOGAMES"