Object Study
So Percussion, PLOrk, and Matmos at the Kitchen
By Brian Droitcour 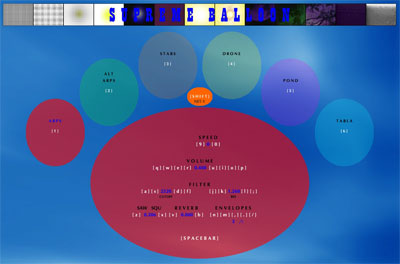 Image: The score to Matmos’ Supreme Balloon, as seen on screens of PLOrk members

Last weekend the Kitchen hosted two night of performances by Matmos, So Percussion and PLOrk, the Princeton Laptop Orchestra. In addition to playing the conventional array of instruments, So Percussion exploits the unnoticed sonic properties of everyday objects -- Friday’s program began with their Cactus Song, in which the ensemble’s members huddled around a miked squash, stuck it with resonant tines, and plucked it like a karimba. So Percussion’s pairing with PLOrk highlighted the latter’s treatment of computers as objects. Technology from the phonograph to the sampler and beyond has been used to disembody sound, but PLOrk is among the growing ranks of electronic musicians who adapt gadgets to fix sound production in its physical context. They make laptops behave less like mixing machines and more like percussive instruments. 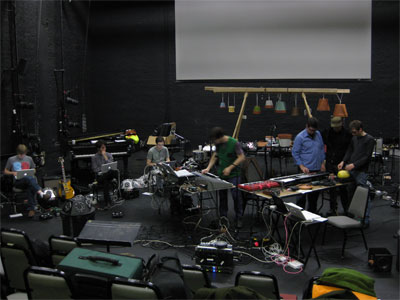 Image: Musicians rehearsing at The Kitchen. (Courtesy of PLOrk.)

PLOrk uses hemispherical speakers that localizes the sound rather than mixing all the input into a single system, to give each computer an individual voice, like instruments in a symphony. (They also look awesome.) The ensemble’s members write software that connect each action to a result in order to make playing the laptop more like hitting the keys of a piano, so they’re not just dragging a cursor to manipulate parameters in a window. Another favorite PLOrk device is hacking the Mac’s motion sensor and connecting it to a sampler, so that swinging the laptop creates the illusion that a musician is grabbing sonorities from the ether and throwing them across the stage. The orchestra made effective use of that technique in Supreme Balloon, a Matmos piece that began with drones and transitioned to a tuneful idyll as the accompanying video shifted from trippy op art to footage of a woodland pond. As PLOrk tossed around sounds, the glowing apple silhouettes on their laptops looked like fireflies.

Beer cans starred in the evening’s encore, Matmos’ Aluminum Song. Performers tapped them for a few minutes, shotgunned the contents, then crushed the empty receptacles under microphones. The members of PLOrk who preferred to stay sober picked up jug-band instruments, putting aside their laptops to make music with other constructions of metal and plastic.