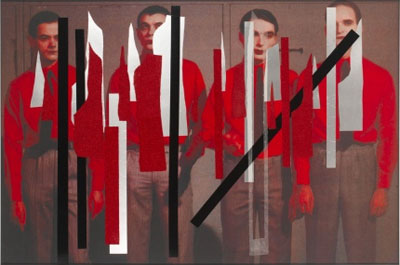 There is an approach, within military strategy, known as "Razzle Dazzle." The idea is to stand out with such visual intensity so as to perplex your target. This might be a good point of comparison with the work of Meredyth Sparks, which addresses political issues by dialetically fusing stills from the halls of rock music history, a constructivist visual vocabulary, and bling...lots of bling! Her current show at New York's Elizabeth Dee gallery, entitled "We were strangers for too long," employs images and sculpture heavy on silver foil, vinyl, and glitter, as ammo in launching an argument about intersections of "radical chic" and the culture wars. Her digitally-processed collages layer not only images from the mid-1970s that she argues chart a rise in rebellion against conservative culture, but also splice together art historical references to perspectivalism, the history of photographic media, and modernism's love affair with the grid. Her work both pushes and critiques the ideology of loud, glam, in your face activism, looking particularly at how strains of punk rock became (either through their own design or by a process of co-opting) part of the capitalist system they sought to tear down, thus raising the question of how we might come to fight fire with fire by once again making protest hot. - Marisa Olson