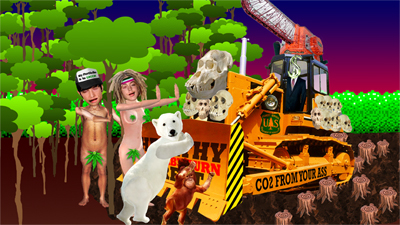 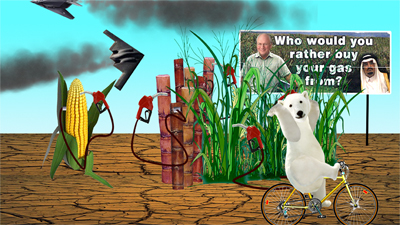 The often-hilarious artist Kenneth Tin-Kin Hung's newest game is no laughing matter. Ok, actually it is... but it's still what many in the gaming world now call a "serious game," in that it addresses the important issue of global warming. The piece lets viewers step inside of an animated world marked by the same crazy, satirical visual style for which he's gathered attention in previous works like Because Washington is Hollywood for Ugly People and Residential Erection. These projects manage to comment on the absurdity of aestheticizing politics while doing just that, appropriating and remixing material scoured from the web to comment on the relationship between media spectacles and political spectacles. His game, Gas Zappers, similarly recycles pop imagery to cut through the haze of information surrounding the impacts of pollution. The narrative of the game criticizes quick-fix attempts and suggests real strategies for cutting down on carbon emissions. The project manages to be entertaining and educational, at the same time--a balance which is its own art. The game can be played online and is also on view at the Berkeley Art Museum from October 22 through February 8. - Marisa Olson