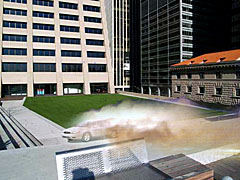 Returning for its third year, the Electronic Music Foundation's acclaimed sound art, music and ecology festival Ear to the Earth will take place this month in locations all over New York City. Ear to the Earth is organized around the principle that sound's distinct emotional impact makes it a significant medium in which to explore environmental concerns such as global warming, extinction and habitat destruction. Divided into two sections, "New York Soundscapes" and "Other Soundscapes," this year's events maintain a strong urban emphasis. Andrea Polli's installation Cloud Car, takes the automobile, a key force within the development of American cities, as its locus. With the aide of special effects technician Chuck Varga, Polli will envelop a Ford Taurus station wagon entirely in mist. Visitors will be invited to sit in the car and listen to environmental sound compositions. Resembling a broken down vehicle on the side of a highway, the work is a poignant symbol for America's current predicament in regards to oil dependency. Cloud Car will be on display at Eyebeam October 18th and will then move to the New York Hall of Science on October 25th. LoVid will also examine energy in their performance Sunification (for Sync Armonica & solar sound) on Thursday October 16th. Drawing from their 2007 Turbulence commission Bonding Energy, in which the duo positioned seven solar panels across New York State in order to collect and transmit solar energy information to a site that visualized this data, their performance will use this same solar data as a basis for live mixing and manipulation with a device known as the Sync Armonica. Other performances scheduled for the festival will foreground the experience of the city from a personal perspective. On October 17th, Marina Rosenfeld will debut Near Speakers, where she will use field recordings of the 'bleed' from cheap earbud headphones in spaces such as trains and elevators, an everyday experience for many, in a unique DJ set. Following Near Speakers, Miya Masaoka will present Quest for Minetta Creek, which looks at the mythology surrounding the underground streams of New York City. Departing from the idea that waterways will eventually go above ground and take over the streets in the event that humans were to depart, Masaoka interviewed residents living near the underground water source Minetta Creek about their knowledge of and interaction with the stream and pairs this with field recordings of the Minetta itself. Imaginative and slightly dystopic, the work captures city dwellers' common remove from environmental forces. - Ceci Moss