Ken You Dig It
By Ed Halter 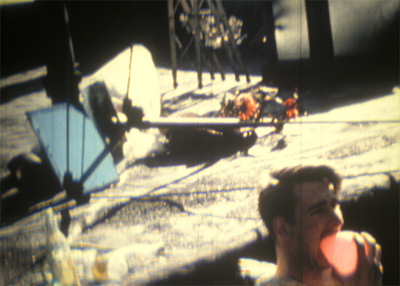 In the recent work of Ken Jacobs, showcased this month in an exhibit on tank.tv curated by Mark Webber, the beginning and end of the 20th century ingest one another in a technological uroboros. A central name in American experimental film since the century's middle, Jacobs has now virtually abandoned shooting and editing celluloid in favor of digital production. In works like Capitalism: Child Labor (2006) and New York Ghetto Fishmarket 1903 (2006), Jacobs mines images from near 1900, taking delight in twisting and strobing them using digital editing, creating new works that revive the visual novelty of pre-cinematic optical toys and explore the hidden three-dimensionality of their source materials. The effects mimic similar patterns that Jacobs has executed live for years in his Nervous System performances, using altered projection devices of his own making; some of these epic events he has recreated in fixed form, including Ontic Antics Starring Laurel and Hardy (2005) and Two Wrenching Departures (2006). For tank.tv's exhibit, Jacobs has wisely excerpted ten minutes or less from these and other longer works, which in their originals can run into triple-digit minutes. It's a wisely pragmatic decision to offer only samples online rather than the whole shebang, given the challenged attention span available to the typical internet surfer, but this does mean that the grandly symphonic nature of Jacobs's work is barely conveyed; users are granted but a taste. Jacobs's sampler is rounded out with a selection of early film work, which range from downtown Beatnik romps featuring Jack Smith to the canonical structural film Tom, Tom the Piper's Son (1969-71), a rigorous investigation of Edison's composition, to his exquisite exercise in "found cinema," Perfect Film (1985), which reprints enigmatic lost local TV news fragments from the day of Malcolm X's assassination. - Ed Halter