Worlds of Wonder
By Ed Halter 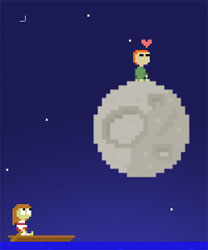 The Tokyo Game Show, Japan's massive video game expo, traditionally serves as a major convention for the commercial gaming industry, but this year launches a sidebar delicately named Sense of Wonder Night, which embraces work created from the international indie gaming world. Inspired by the Experimental Gameplay Sessions, which began at the Game Developers' Conference six years ago, Sense of Wonder Night focuses on innovative games that, in the words of the organizers, evoke "a feeling that something will change in their world and make them gasp at the moment they lay eyes on the games or hear the game concepts." For those who can't be in Japan on October 10th for the presentation, many of the finalists' games can be downloaded or have trailers posted online. Among them are Depict, by Jesús Cuauhtémoc Moreno Ramos, which promises to be a shape-recognition game played with phone cameras; Daniel Benmergui's Moon Stories, a love story with multiple narrative outcomes and an ingenious Polaroid-snapshot gameplay structure; an optical-illusion 3D shooter called The Unfinished Swan by Ian Dallas; and Mark Essen's druggy hypercolor trip Randy Balma: Municipal Abortionist. Opening stateside concurrent with Sense of Wonder Night is the Bellevue, Washington edition of IndieCade, which will include a preview of fl0wer, the new title from the makers of indie success story fl0w, and an exhibit of thirteen indie games including Eddo Stern's sensory-deprivation experiment Darkgame, Jason Rohrer's gently allegorical Gravitation, and Faith Denham's Block H, which takes on the history of political conflict in Northern Ireland. Both positioned on the overlap of art and industry, these two showcases are testament to the wide variety of endeavors that currently fall under the "indie" label, which includes everything from browser-based games to politically-minded gallery installations to (possibly) next year's big hit on Xbox Live Arcade. - Ed Halter