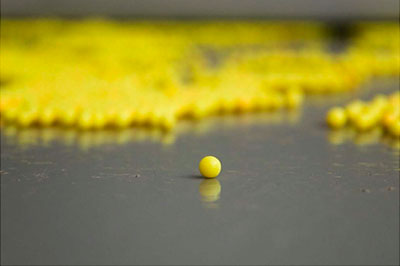 Caleb Larsen's solo exhibition at Philadelphia's Esther Klein Gallery presents a series of conjectures, testing our assumptions, estimations, and in some cases naiveté with regard to digital information. His installation, Monument, constantly scans 4,500 English-language news feeds and drops yellow BBs on the floor each time it finds a report of a person dying. Over time, the tiny balls will pile-up and form a sort of monochromatic monument to the unknown dead. In a sense, it visually cashes-in on the death craze that often seems to grip the media. Many of his other pieces draw on appropriation and literary adaptation. Who's Life Is It Anyway? asks what it would mean to pilfer other people's Twitter pages for autobiographical lines of one's own (and here, the "auto-" seems tongue-in-cheek, if not ironic). In other works, Larsen has taken on the not-so-small feat of converting both Shakespeare's entire oeuvre and the Epic of Gilgamesh into new forms. In the former case, he's translated all of the text into a visual field of colored squares, while the latter is returned to orality when a computer is ordered to read the ancient epic aloud. Larsen's stated interest is one of using logic-based systems to explore the differences between digital and physical spaces. At times, the results are poetic and, at other times, he seems to be leading us to the discordant conclusion that the proposed affinities do not compute. - Marisa Olson