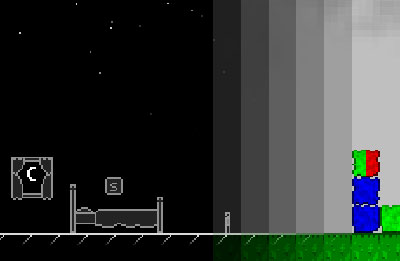 Jason Rohrer, creator of Passage and Gravitation, has a new game, Between, which is now available for download through Esquire.com. Unlike his previous works, which pull their narratives from life experience -- such as one's path through birth and death in Passage and inspiration in Gravitation -- Between occupies more surreal territory. Directions are not explicit, and while a two-player game, the presence of the other player, and the correlation between players to action in the game, is obscured. The players, drifting between "wake" and "sleep", must navigate the space in order to decipher their tasks, which involve building a tower of colored blocks. The tower can only be built using certain colored blocks, and the availability of these colors is entirely dependent on the progress of the other player's tower. Thus, while the individual player's tower building seems to operate in remove from the other player, he is, in fact, reliant on their decisions in order to complete the job. The game's ambiguity sets up an interaction between players that draws on cooperation, but a cooperation that is both confusing and difficult to attain.